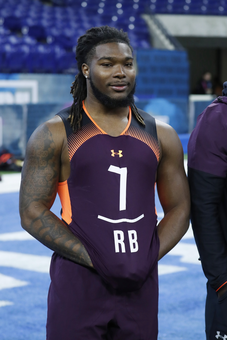 Explosive back should be a Day 2 pick

Memphis back Darrell Henderson should be one of the first running backs drafted later this week, most likely before the end of Day 2. His 1,909 rushing yards last year were more than any college back but Wisconsin's Jonathan Taylor (who will return for his junior season). He did it while averaging 8.9 yards per carry, tops in college football.

High yards per carry doesn't always translate to NFL success. Maybe the back was running behind a dominant offensive line, or against crummy opposition. But looking at some of the top college backs drafted in recent years, that metric yields more hits -- running backs who have enjoyed at least some NFL success -- than misses.

In the last 15 years, there have been 110 running backs selected in the first three rounds of the draft. None of those guys had a higher yards per carry than Henderson. A lot of the best ones in that regard had some success, albeit with some notable exceptions.

In this table, I'm listing all backs drafted in the first three rounds since 2004 who averaged at least 5.5 yards per attempt in their final college seasons. I'm including some of top college backs from 2018, many of whom will likely also be selected before the end of round 3. (No Josh Jacobs, who averaged 5.3 yards per attempt at Alabama last year, or David Montgomery, 4.7, although they're expected to be selected by the end of the day Friday.)

Some of the guys near the top washed out quickly. Alex Green, LaMichael James, J.J. Arrington. Felix Jones was a disappointment.

But Reggie Bush went on to have a solid career. Melvin Gordon and Todd Gurley have been pretty great. Sony Michel looked good as a rookie, Rashaad Penny showed promise at times, and guys like Coleman, Hill, Hyde, Mixon, Johnson and Bernard have had some success.

At 5-foot-8 Henderson is on the small side, but he's solidly built at 200 pounds. He ran a 4.49 at the combine; he's got some breakaway ability (as the 8.9 indicates). I don't know if he'll definitely be one of the top 5 running backs drafted, though I think he will be -- and likely one of the top 5 backs in rookie drafts too.

Henderson caught 63 passes in college, so he has some receiving ability, although his size could be an issue in pass protection. I'm hoping he ends up with a team that won't be put off by his size. Get him in the right offense, perhaps paired with a nominal veteran back who he can quickly shunt into a secondary role, and there's some potential.