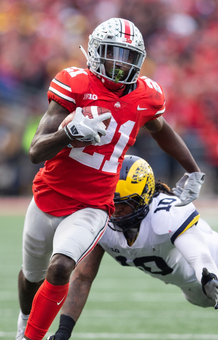 Ohio State receiver will add sizzle to some offense

I will be interested to see where Parris Campbell goes in the draft. I haven’t heard a ton about him – I’m thinking early second round – but with his measurables he looks like he’s got a chance to be the best of the rookie receivers.

I’m not a fan of chasing after 40 times (recall, most famously, Darrius Heyward-Bey), but in the case of Campbell, I’ve seen the speed utilized on the field. Check out this highlight package. Numerous times here – definitely on the first three touchdowns – Campbell uses his speed to score touchdowns where a more mortal receiver (say a 4.45 guy) wouldn’t have gotten the edge. He’s a fast, fast dude.

Get Campbell in the right offense, and I think he’ll make a lot of big plays. He’ll score some long touchdowns.

I find him to be interesting in comparison with the other top receiving prospects. Marquise Brown looks great and might be even faster but he’s awfully small. He weighs 165 pounds. He’s also coming off a Lis Franc injury.

D.K. Metcalf is huge and ran a 4.33 at the combine (for his size, an even more impressive time than Campbell). But Metcalf has been plagued by injuries, hasn’t played much, and is so large (6-3, 228), I worry about him having issues with starting and stopping. He might have to be utilized as an outside receiver – another Vincent Jackson. While Metcalf was great in the 40, he was remarkably bad in the shuttle drill, running only 4.50. While Campbell has some size, he ran 4.03 in the shuttle, fastest of all the receivers they tested this year. (I mentioned Cooks and Beckham earlier, so in fairness I should concede they were faster than Campbell in the shuttle – 3.81 and 3.94.)

A.J. Brown was productive at Ole Miss, but with him you’re going more for production, toughness and know-how and less for traits – looks more like a guy who should be going in the second round.

With Campbell, my concern is that development and instruction will be needed. He didn’t run a lot of pro-style routes at Ohio State. Presumably with that speed, teams will want to run him on a lot of fly routes, where he’s catching the ball 40 yards downfield, but I don’t see any of those in his highlights package. And I don’t know how good his hands are. At Columbus, I think they mostly ran him across the field, letting him use that speed, on both shallow crossing routes and jet sweeps. He was used in a very similar way to Curtis Samuel, who was the 40th pick of the 2017 draft. Samuel didn’t do much as a rookie but came on some last year. Samuel also ran 4.31 but is an inch shorter and 10 pounds lighter.

If you wind the clock back two years and look at the Curtis Samuel highlight tape, I don’t see a lot of difference between the two guys. Campbell caught 90 passes and 12 touchdowns last year. Samuel caught 74 passes and 7 TDs in his final season at Ohio State, but the offense wasn’t as prolific that season – Samuel actually accounted for a higher percentage of the team’s production that year. (Which is more impressive, catching 7 of 26 touchdown passes? Or catching 12 of 51?).

But I think somebody in the late 20s or 30s will be interested in Campbell. I think he’ll be developed into a really good pro.