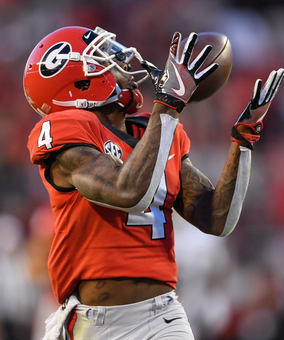 Kansas City selected Mecole Hardman in the second round, and it looks like history is going to repeat itself. But what kind of history?

Tyreek Hill almost certainly has played his last game for the team – certainly for this year – and they’re likely hoping that Hardman fills some of that role. He’s a speedy little player, and he scored some Hill-type touchdowns at Georgia.

But it’s difficult for receivers to transition to the pros. NFL offenses are more complex, and the defensive backs are bigger, faster and better.

Kansas City, recall, drafted another receiver from the same school in the same area of the draft a few years back, Chris Conley, and was never able to get him going as a pro. Conley signed a modest free agent deal with Jacksonville a few months back.

If you could time-travel Conley forward into this draft, many would select him before Hardman. He’s almost as fast and 4 inches, taller, with a bigger catch radius. He came in with more experience and production. If you watch Conley’s college highlight tape, you’ll see some one-handed grabs that are pretty impressive. At the combine, Conley was more impressive than Hardman, with an extra 8.5 inches on his vertical and an additional 10 inches on his broad jump -- a great athlete.

On Hardman’s behalf, he looks faster. Roll his highlights package, and it’s apparent he’s a fast dude. At the combine, the 40 times on these guys are almost identical, but Hardman looks like more of a burner when they’re playing in games. Conley’s 4 inches taller, so this might be a deal where Hardman is quicker, and Conley’s longer stride becomes a factor after they build up speed.

Hardman looks more dangerous when the ball is in his hands. He carried 13 times for 97 yards and 2 TDs at Georgia and also scored on a punt return. I imagine they’ll use him on some end-arounds and consider making him their punt returner.

On Hardman’s tape, I see a number of plays where he’s behind the secondary and catching long balls. Watching those, you get the feeling he and Patrick Mahomes will connect on some of those kind of touchdowns.

Kansas City traded up to get him, and that’s a plus. They definitely wanted to select him. And reports indicate the Jets were also trying to trade up to select him.

But they’ve got to get him coached up and ready to play. Hardman has a limited background at the position. He didn’t play wide receiver in high school, and he was a defensive back when he showed up at Georgia. So for 2019, I would expect Sammy Watkins and Demarcus Robinson will be Kansas City’s starting wide receivers when the season opens. I expect Hardman will be mixed in as a flavor piece as a third receiver initially, and they’ll go from there.

If I were drafting for 2019 today, I would select Watkins and Robinson before Hardman. If we’re getting into dynasty and long-term, then I would definitely select Hardman before Robinson (and maybe before Watkins as well).