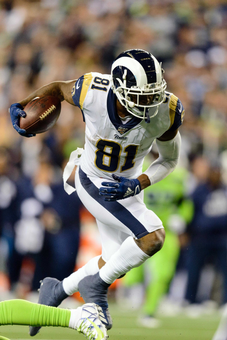 Thursday night’s game could signal a changing of the guard in the NFC West. The two-time division champion Rams are now trailing both Seattle and San Francisco. A position-by-position fantasy breakdown of last year’s game.

Rams running backs:
Todd Gurley wasn’t a disaster in this game. He had a couple of 10-yard runs early where he looked decent, and he scored a couple of touchdowns. But he’s not a franchise running back anymore. At best, he’s an above-average starting tailback. In this one, he carried 15 times for 51 yards. It’s in the passing game where the decline is most apparent. In five games, he’s caught 14 passes for 68 yards. In the previous two years, he averaged 47 receiving yards per game and 11.1 yards per catch, with 10 TD catches in 29 games. He can’t do that anymore. I expect it won’t be long before they start spelling him more with other backs. Malcolm Brown got on the field for only 3 plays in this one, but he might be just as good as Gurley right now. Third-rounder Darrell Henderson averaged 8.9 yards per carry his final two years at Memphis, consistently busting loose for long plays. They haven’t really done anything with him yet, but they may start working him in during the second half of the season.

Seattle running backs:
Chris Carson was the best running back on the field Thursday night, banging out 118 yards on 27 carries. He looks even better when you get out the contracts. Gurley is signed to a four-year deal worth $57.5 million. Carson is making $2.5 million for four years. Carson played more than usual in this game – on the field for 84 percent of their snaps. That was tied to Rashaad Penny missing the last two games with a hamstring injury. Penny got on the field for a few carries in this one but picked up only 18 yards on 6 carries, so they didn’t use him much. Seattle has used C.J. Prosise some the last few weeks, but he didn’t get in the game in this one. I don’t know that we’ll see Carson play 84 percent of the snaps in another game this season. More commonly, we’ll see 70-30 and 60-40 splits. It’s a position with a high attrition rate, so those with Penny should hang in there. At some point, Carson may miss a few games, and Penny might be just as good while he’s filling in.

Jared Goff:
Todd Gurley is declining, and that should help Goff’s numbers. Going forward, there are going to be fewer of the games where the Rams overpower teams with their running game (with Goff playing a limited, controlled role). In each of the last two years, there have been seven games (almost half) were Goff has passed for fewer than 235 yards. He’s going to have to do more now. They started this season with a run-oriented win at Carolina, but Goff has thrown for 283, 268, 517 and 395 yards in his last four. That’s the new normal. Goff is not yet an elite quarterback. He misses too many throws and has had too many turnovers. But he’s working on it and developing. He played pretty well in this one, particularly in the second half. He didn’t have much trouble driving the Rams the length of the field for what should have been the game-winning touchdown. Just one touchdown, but there were a couple of near misses (a receiver not getting his feet down in the end zone, and another ball incorrectly spotted just short of the goal line).

Russell Wilson:
Russell Wilson is on the short list of the truly indispensible players. He’s one of the guys who makes televisions turn on. Nobody wants to watch Matt Moore quarterback Kansas City. Nobody wants to watch Jared Stidham lead the Patriots. And nobody wants to see Geno Smith operating the Seahawks. Wilson has been on top of his game this year, with 12 TDs and no interceptions in the first five weeks. The Seahawks were too conservative with Wilson for much of last year; he averaged only 216 passing yards per game. He’s averaging 282 this season.

Rams wide receivers:
Brandin Cooks signed a five-year contract worth $81 million. Robert Woods signed for five years for $34 million. Cooper Kupp doesn’t make that kind of money (he’s on his rookie deal -- $3.8 million for four years) but is a lot better than those guys. He’s got a feel for the position, and there’s a comfort level between him and Jared Goff. Kupp has gone over 100 yards four games in a row, with 4 TDs. Right now, he’s on pace to finish the season with 131 catches for 1,616 yards. Woods and Cooks each have one 100-yard game. In the last 11 games the Rams have had all three of these receivers on the field, Kupp has caught 9 TDs. Woods and Cooks have each caught 3. Cooks in the not too distant past would be in any discussion of the top dozen receivers in the league, but he doesn’t seem to be that guy right now. I’m not sure if that’s because he’s simply not that good, or because they’re not using him properly. The Saints and Patriots both chose to get rid of Cooks rather than giving him a big contract. Sammy Watkins previously was in the Cooks role and was also underwhelming. In this game, Cooks caught only one ball before getting knocked out of the game early in the fourth quarter with a concussion. Should Cooks be sidelined for their next game, they’ll plug Josh Reynolds into that role. Reynolds caught 5 TDs in the eight games he started last year. But those starts were mostly with Kupp out. I wouldn’t expect Reynolds to do much of anything filling in for Cooks. In this game, Reynolds wasn’t targeted at all in the fourth quarter, and they were throwing a ton.

Seattle wide receivers:
Tyler Lockett is the clear No. 1 option in this passing game. He’s on pace to finish with 96 catches for 1,213 yards and 10 TDs. He had a remarkable touchdown in this one. After that, the other receivers all play supporting roles. DK Metcalf is a starter, but they’re not using him a ton, and he hasn’t been super effective. He’s caught only 12 of the 26 passes thrown his way. He does, however, have a lot more finishing power than the other three wide receivers they’re shuttling through – Jaron Brown, David Moore and Malik Turner. Those other three guys (who look pretty similar to me) aren’t worthy of roster spots in any fantasy league I’m aware of. With Metcalf, he’s huge and fast, so you know there will be some attempts to hit him on long touchdowns. They got one of those against the Rams. And I think they also want to make Metcalf a part of their goal-line offense. In this game, shortly before the game-winning touchdown, they tried to get the ball to Metcalf on a back-shoulder fade at the goal-line. And the 2-point conversion (which fell incomplete) was designed to go to Metcalf all the way. Metcalf has caught only 12 passes in five games; he’s not going to be a volume catcher. But some chance he winds up in the top 20 in TD catches at the end of the season.

Rams tight ends:
Gerald Everett might be developing into a relevant fantasy player. The Rams haven’t used their tight ends much under Sean McVay – 41 catches and 3 TDs in 2017, and 58 catches and 5 TDs last year. That’s production that’s been split between Everett and Tyler Higbee. But Everett has some receiving chops, and they’ve been using him more recently. Two weeks in a row he’s seen career high targets (8 and 11). He caught 5 passes for 44 yards and a touchdown against Tampa Bay, and he caught 7 passes for 136 yards last night, including a play that probably would have been ruled a touchdown had the Rams utilized a challenge. The Rams have passed for 517 and 395 yards in their last two games; that has helped him along. The plan is not to pass for 330-plus yards every week. But the Rams used to be able to effectively pass to Gurley. That’s gone now, and Everett (and to a lesser degree, Higbee) could be picking up a lot of those kind of touches. With the way Everett seems to be developing, he makes a lot more sense in a fantasy league than a lot of the tight ends who were drafted before him in almost every draft – guys like Trey Burton, Kyle Rudolph, Jared Cook and perhaps O.J. Howard.

Seattle tight ends:
Will Dissly is fast developing into a Pro Bowl tight end. That’s amazing, considering he was just a blocking tight end in college (he began as a defensive lineman at Washington). He had a remarkable downfield grab in this game, and there’s a comfort level between him and Russell Wilson. After Tyler Lockett, Dissly seems to be the No. 2 option in this passing game. He’s been operating at a 1,000-yard pace recently – 22 catches for 250 yards and 4 TDs in his last four games. I was surprised how often Seattle used two tight ends in this game. Luke Willson was on the field for 58 percent of their snaps, often split out wide left in a wide receiver position. But just one catch for Willson; his role is primarily to block.

Greg Zuerlein:
He missed a 44-yard game-winner at the end of this one, but he’s been remarkably productive and consistent over the last three years. Since Sean McVay took over in Los Angeles, Zuerlein has scored 323 points in 30 games. That’s the most productive run by a kicker in the 100-year history of the league.

Jason Myers:
He missed a 48-yarder that was almost identical to Zuerlein’s – just past the same part of the same goal post. He’s been a disappointment thus far, with only 25 points, but I expect he’ll be a lot better going forward. They just need to get him on the field more. That should happen; Seattle will be a playoff team.