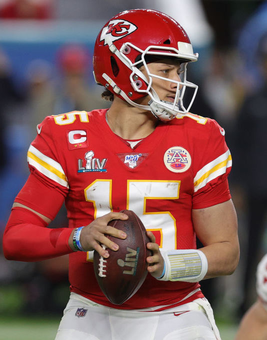 I am in a 12-team league, standard scoring. I have the 12th and 13th picks (and then 36 and 37). I am looking at Jackson or Mahomes; if so I would have to draft them as either a 1 or 2 (they will never make it to the 3rd round in my league). Would you draft them that early?

Most people would say no, hoping to land acceptable quarterbacking later. And that’s a reasonable enough strategy. But to me, Mahomes looks special. I think the chances are very good that he’ll throw more than 40 touchdown passes. So for me, I would be thinking very hard about selecting him with your first-round pick. In my eyes, he’s a top-5 overall pick in standard and TD-only formats (but only 12th in PPR). I think you’re chances of missing on your first-round pick go way up if you instead select a running back or wide receiver. I wouldn’t select Lamar Jackson there, but I would be willing to adjust my overall draft strategy to accommodate Mahomes.

I've noticed in recent posts that you have been suggesting that highly-drafted rookie running backs like Edwards-Helaire, Taylor, and Dobbins will be over-valued and over-drafted. Similarly, the incumbent RBs (Williams, Mack, and Ingram) will be under-valued. Is this a general philosophical approach that you'll tend to defer to the veteran RB over the rookie given their proven track record, or is it simply coincidental that in all three cases this year you have arrived at the same conclusion?

I think there’s something to be said for experience. Guys need to learn the offense and figure out what they’re doing. In the last 20 years, for example, only 38 rookie running backs have finished with top 20 numbers (PPR scoring). But 65 second-year running backs have done it – almost twice as many. In all but three of these cases, the rookie has some ability and seemingly a nice future, but all of these teams also have capable, proven veterans who can be trusted.

I think there’s a considerable subset of fantasy drafters who see a running back selected in the second round and assume he’ll simply show up and be the guy from the get-go. I think the hit rate is better if you take the more pessimistic route. With CEH being the last pick of the first round, let’s think of him being a second-round pick. In the last 20 years, there have been 47 running backs chosen in the second round. Only 15 of those backs (less than a third) finished their rookie season as the most productive running back on their own team (and five of those guys ranked 28th or lower using PPR scoring).

What are you guys thinking about Josh Reynolds this season? I think he is way under the radar. I like it.

Sorry. I’m not a big Reynolds fan. The Rams started using fewer three-receiver sets late last year. That’s a factor. And he’s had plenty of opportunities, in my opinion, without doing enough with them. In the last 16 games that he’s been on the field for at least two thirds of their plays (a season’s worth of starter-type playing time) he’s caught 45 passes for 641 yards and 6 TDs. In those games, they’ve completed only 47 percent of their passes when going to him.

There will be some preseason stars who don’t pan out. James Washington was about the league’s most impressive wide receiver in the preseason last year, with a bunch of 40-yard receptions. That didn’t translate. To a lesser degree, I saw David Montgomery, Damien Harris, Adam Humphries, Jalen Hurd and Darrell Henderson do some positive things in August, and none of them had great years. So I would agree that it makes sense not to get overreact when a player shows you just a little something in the practice games.

Could you please help me with my holdover! I have the 6th pick in a 12-team snake draft non ppr. D. Henry round 2, J Jacobs round 4, C Sutton round 11. I'm leaning Jacobs but Sutton is like a freebie.

I rely on FFI and have for a long time. I began buying the magazine in 1993 and soon moved to the website. I would like to see FFI incorporate a dynasty list weekly late in the season. This would be very helpful to those in keeper leagues. Specifically this is helpful in making waiver pickups and drops. Is this something FFI can include weekly especially late in the season?

I’m aware that many play in dynasty leagues. We’re not forgetting about that demographic. In August, you’ll see a revised dynasty board each Thursday. The regular update proper goes out on Monday morning (it’s tailored more to just 2020) but when the modestly revised version goes out on Thursday, it will also include updated lists at each position for dynasty league.

Once we get into the regular season, I turn my attention to dynasty formats once per week. Each Saturday I’ll hit one of the four different notable position, providing an updated top 100 at wide receiver or running back, or an updated top 50 at quarterback or tight end. We rotate through, hitting each position once every four weeks all the way through the year. Those rankings are posted at the website. To access, click on the “In-Depth” tab at the top of the page and pull down to “Dynasty Leagues”.

A tale of 2 teams. Draft spots were 10 and 9 in a twelve team high stakes PPR draft. Two very different outcomes. Team 1: L. Jackson, M. Ryan, N. Chubb, C. Carson, D. Williams, Lat Murray, N. Hines, D. Adams, Perriman, Golden T, A Jeffery, Diontae J, H Renfrow, S Watkins, M Gallup, M Andrews, G Everett. I'm not a big fan of drafting Jackson but he fell to the late 3rd round and Andrews fell to the late 5th for me. So this put me into the mode of grabbing a bunch of WRs in the later rounds. I don't like the look of my flex spots but the hope is 2-3 guys out of Gallup, Tate, Jeffrey, Perriman, Renfrow and Diontae Johnson pan out. Team 2 is an example of how I usually draft when things go the way they should. T Brady, Tannehill, Drake, Akers, J. Howard, Lat Murray, C Edmonds, Tyreek, TY, Deebo, O. Beckham, Perriman, Fant, Rudolph. So the question is which team would you prefer if you are starting 1 QB 2 RB 2 WR 2 FLX and one TE. Team one is not typical of how I normally draft and I changed my strategy on the fly.

These are left-handed teams for me, because there are some players that I won’t be drafting on any teams this year. I’m not confident Jeffery will even step on a field this year. He’s a guy who’s literally not even on my draft board. And guys like Watkins, Everett, Brady and Beckham; I’m operating under the assumption that in every league I’m in, there will be multiple owners who are a lot higher on those guys than I am.

Are these different leagues? One of the teams have three more players than the other. I plugged them into my stat projections. They indicate that the Lamar Jackson team (using what I think should be the starting lineup) should outscore the Brady team 127-121 on opening day.

What is the % of 2nd-year WR in the NFL having down year?

I have been working on a little receiver factoid that will appear on the website this week. In the last 20 years, there have been 36 wide receivers who had pretty good seasons in their first year – guys who put up top-50 PPR numbers but who didn’t finish in the top 30. That is, you see aside the statistical monsters (think Odell Beckham and Mike Evans) who will naturally regress and look just as receivers who were pretty good. Of the 36 receivers in this subset, half of them got better in their second season, and half of them got worse. The complete numbers for these guys will be posted on the site later in the week.

Curious about your thoughts on a neat little tweak we are introducing to our rules this season. First, a quick background on our set-up: We currently run a drauction to start each season where each team gets $100 fantasy dollars to spend on a 4-round auction. After each team has acquired 4 players, we revert to a draft to finish filling our rosters. 14 team league, where the top 8 go to our playoffs, and the bottom 6 go to our Loser’s Bowl play-offs. Here’s our tweak for 2020: the winner of our Loser’s Bowl will now also receive a $3 increase to his auction budget for the following season. Now, you may think $3 isn’t much, but how many times have you lost out on a player you really wanted by just a dollar or two? I think we all have. It’s also not so much that it’s going to unfairly sway the auction the following season. Now, here’s Part B to this new rule: The winner of our Super Bowl (since he won the winner’s bracket after all), has the option to steal the $3 auction bonus from the Loser’s Bowl winner in exchange for a nominal ‘real cash’ fee. Usually our Super Bowl winner is so flush with winnings, that this fee may seem like a pittance and stealing the $3 auction bonus for next season seems like a good way to get a competitive jump on next year. Or, maybe he’ll decide it’s not worth any ‘real cash’ outlay. But if he does steal it, the winner of the Loser’s Bowl ends up with even more cash. So it’s kind of a win-win. In either case, we feel it makes for an interesting little tweak that other leagues may find interesting. Your thoughts?

I haven’t tried one yet, but I like the idea of a drauction. To me, it makes sense to use the auction only for those top 40-60 players. A draft is fine for the lesser guys. I don’t like that in an auction, sometimes I’ll nominate a player that I don’t think anybody’s really thinking about – think Jace Sternberger or Benny Snell – and then others will start chiming in. “Ian seems to like this guy; he’s bidding $1.00 on him; I’ll go to $2.00 on Sternberger.” But I would need to be sold on the idea of a team coming into an auction with a $3.00 headstart. With it being a new season, I like the idea of everyone starting on a level playing field.

There’s too many names here for me to get into them all. (On these kind of questions, leave out the 9-10 guys that you’re already keeping and cut to the meat of the question.) I see Goedert on there. I like the direction his career is headed. I understand that he’s on the same team as another great tight end, but I think they’ll both play a lot and produce. I consider Goedert to be one of the top 8 tight ends on the board for just this upcoming season. Despite sharing time with Ertz, he caught 60 passes in his final 12 games last year (an average of 5 per week). I see a P Williams on there. That’s probably Preston Williams. Reports indicate he’s going to be healthy; prior to getting hurt last year, he looked pretty similar to DeVante Parker.