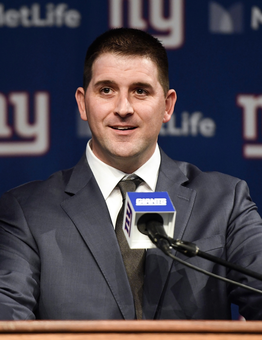 There are five new coaches this year. When I listened to their introductory press conferences, one definitely got my attention more than the rest.

All of these coaches stepped up for half-hour introductory press conferences. And thanks to the magic of YouTube, those are all available for everyone to see.

Ron Rivera, making the move from Carolina to Washington.

With coaches there’s the “leader of men” or “command the room” dynamic. Is this the guy you want to put up in front of your entire team? Can he hold their attention? Can he win their respect and motivate them?

To me, if you’re looking at just those qualities, Joe Judge is the one of the five who really catches your eye. He steps to the mic, and there’s immediately a sense of energy and purpose. It’s clear that he has a vision, and that he’s going to implement it. He’s going to create a culture, he’s going to hold players accountable. Bullshit will not be tolerated, and it doesn’t matter where players were drafted or how much their making.

Listening to Judge, I felt that I needed to sit up a little more in my chair – that he might be watching me through the monitor and call me out. In my eyes, he and the Giants put on by far the best of the five press conferences.

I didn’t think any of the other four were bad, but they were not as impressive in my eyes.

Rhule and the Panthers mixed in a lot of cheesy music.

Stefanski in particularly seemed more like a coordinator than a head coach. He tried to connect with the media by asking each of them what part of Cleveland they were from. He joked around about his kids being excited that he’ll be in Madden, and promising his kids they could get a new puppy as part of the move.

McCarthy had the funniest line, but I thought it was ill advised. Jerry Jones started explaining how McCarthy, during his year off, had examined every play from every NFL game. McCarthy interrupted to say that it wasn’t actually true – he was just saying that in the interview because he wanted to get hired.

Rivera joked around about wanting to get back into coaching because he doesn’t want to have to do dishes around the house.

Judge was the guy with the most intensity and the best communication skills. He seems to be the most focused on what he’s trying to accomplish.

Time will tell how these guys will pan out, and other factors will play a big role. They’ve got rosters with various strengths and weaknesses, and they’re all working with different front offices with different philosophies in acquiring talent.

But based on initial impressions, Judge to me is the one of these five who looks most likely to develop into one of the league’s notable coaches.