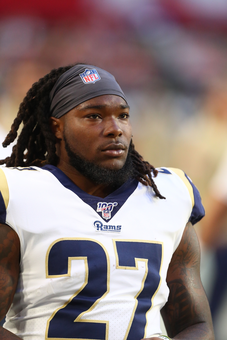 Caution advised when giving up on seemingly ineffective backs

What do we make of running backs who don’t do much as rookies? Darrell Henderson and Damien Harris, for example. Is it time to cut bait on those guys?

Harris hardly even got on the field for the Patriots, while Henderson showed a couple of brief flashes while playing sparingly for the Rams – he was their 3rd-string tailback for much of the season.

But if form holds, some of these running backs will at some point become viable players. Recall Ronald Jones of the Bucs. He was a train-wreck as a rookie, playing so poorly it was fair to wonder if he would have made the team if he weren’t a second-round draft pick. He came around nicely and became their starter.

(And let’s not disparage Snell and Pollard too much; Snell had a couple of good fill-in games for Pittsburgh, while Pollard had a 100-yard game off the bench.)

Each player, of course, must be evaluated on his own merits. If a player gets arrested twice in the offseason and shows up 30 pounds overweight at training camp, he’s probably not a good investment. With Ronald Jones in Tampa, on the other hand, they didn’t have much else at running back and were talking him up in the offseason.

In the last 20 years, 65 second-year running backs have put top-20 numbers. That’s using PPR scoring. Of that group, over a third didn’t rank higher than 45th in their first year. (I was going to use the top 50, but I saw three backs ranking 48th-49th, and I wanted to get them in there). In the chart, I’ve got these risers tagged with black dots.

Only slightly more of these backs were guys who already had ranked in the top 20 in their first season.

Scorecard reads 27 who were top-20 backs as rookies, versus 23 who ranked no higher than 45th in their first year.

Of the top 18 second-year backs of the last 20 years, a third were guys who didn’t shine as rookies.

So without speaking to the talent and situations of guys like Henderson (pictured), Harris and others, it would seem to make a lot of sense to use some later-round picks on second-year running backs. The historical numbers suggest that a few of these backs will dramatically outperform where they’re selected in fantasy drafts.

On the chart below, “PPR” shows the player’s fantasy points, including catches and 2-point conversions. The “Rk” shows where the ranked that year. “Prev” shows where he ranked among running backs as a rookie (using PPR scoring).