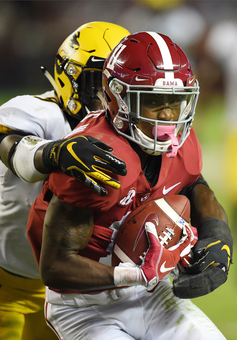 The Raiders made Henry Ruggs the first receiver chosen in the draft. Probably more teams had Jerry Jeudy or CeeDee Lamb as the top pass catcher on their board. But if form holds, none of those three receivers will be the most productive of the rookie receivers.

It’s a deep class this year, and a lot of the guys selected in the second and third rounds look very impressive. Can anybody, for example, say with any certainty that Devin Duvernay won’t be the best wide receiver for the up-and-coming Ravens? Or that Laviska Shenault, Michael Pittman or Brandon Aiyuk won’t be the top guy. Kyle Shanahan says the 49ers believe that Aiyuk is the best of these rookie receivers.

There’s a lot of talent out there. And for Lamb, Jeudy or Ruggs (pictured) to finish with the best numbers, they will have to outperform all of them.

If you look at the historical numbers, it’s kind of a sucker bet. Only rarely does the first receiver drafted finish with the best numbers of the first-year receivers. Remarkably, it’s happened only three times in the last 30 years. And all three of those receivers (I’ve got them in bold) came into those seasons with far more buzz as potential difference makers – A.J. Green, Amari Cooper and Peter Warrick. (Warrick didn’t have a great career, but he was a phenomenal college player, and everybody was excited about his potential.)

Nobody is suggesting Ruggs, Lamb or Jeudy is an A.J. Green type prospect. There was never any suggestion of them being selected in the top 5.

If we look at the top rookie receivers of each of the last 30 years, in 60 percent of those seasons, the most productive player wasn’t even selected in the first round. (I’ve got them tagged with black dots.) In the table here, the final column shows where the top rookie ranked among all wide receivers (using PPR scoring).

If we look instead at the first receiver drafted, more than half didn’t finish as one of the top 4 rookie receivers in their first season. Three finished No. 1 (the same guys, of course, and I’ve still got them in bold). Six others ranked 2nd, three ranked 3rd and two ranked 4th. So that’s only 14 of the 30 finishing somewhere in the top 4.

On the draft here, I’ve added an additional column that’s in bold. It shows where the player ranked among the other rookie receivers.

So in general, unless you see something that you really like from Ruggs, Jeudy and Lamb, I wouldn’t bother making them much of a priority in drafts (especially with the coronavirus wiping out the offseason).

We’ve all heard the quip about trading down to pick up more lottery tickets. If you’re in a dynasty draft, that looks particularly true this year. If you had a less-coveted first-round spot (the 6th pick, perhaps) the probabilities indicate it might make sense to trade it for multiple picks later on. In general, I would rather have two of the wide receivers selected in the second round rather than one of the guys chosen in the first.