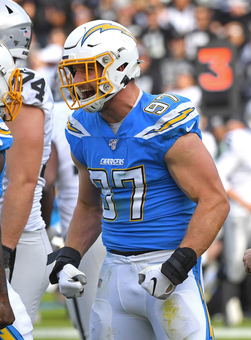 Last time I addressed Strength of Schedule there was a request for defensive information. That is, what defenses project to play the easiest schedules (offenses that didn’t score many points in 2019)?

I’m using touchdowns on this one. That is, I’m setting aside touchdowns scored on kick returns and defensive plays – instead trying to focus on what offenses might do.

I’m not saying those are good assumptions. More on that in a moment. But if we’re going the fact-based route, the numbers generating our totals look like this …

If we take those numbers and plug them into the 2020 schedule, the Chargers and Dolphins project to play the easiest/best schedules (for their defenses). Those are the two teams whose 16 games are against offenses that last year scored fewer than 580 combined touchdowns. Chicago, Washington and Atlanta project to see the best offenses, each coming in about 80 touchdowns higher (on average their opponents should score about 5 TDs more during the 16-game season).

Generally, the Chargers could finish anywhere from 2nd to 4th in the AFC West, but they have some nice defensive pieces – Joey Bosa (pictured), Derwin James, Melvin Ingram. If the schedule plays out the way it’s supposed to, some chance this is a top-10 defense (in terms of allowing points).

Most fantasy leagues don’t use Week 17 (though with the COVID pandemic, maybe that changes this year). If we set aside Week 17, looking at just the first 15 games for each team, it’s the Chargers and Titans playing the league’s most favorable schedules (for their defenses, at least). And Philadelphia, Chicago and Washington project to play the hardest schedules.

All of those numbers, of course, are based on what offenses did last year. I’m not sure that’s the best way to go. No doubt lots of offenses will be wildly different. Pittsburgh, for example, ranked last in offensive touchdowns last year, but that might not be an above-average offense with Ben Roethlisberger coming back. And it’s weird that Kansas City last year was outscored by six teams. Heading into 2020, I think most people consider the KC offense to rank closer to first in scoring.

So if we instead throw out 2019 data and use my offensive projections, we get different (I think better) Strength of schedule results.

Looking at all 17 weeks of the season, I believe Kansas City, Indianapolis and New England will play the three most favorable schedules. And I’ve got Houston, Washington and Atlanta playing the three worst schedules (facing offenses that should score plenty of points).

If we toss out Week 17, the Chargers move up into the easiest schedule spot, with KC dropping down to No. 2. Philadelphia, Washington and Houston project to play the hardest schedules in their first 15 games.