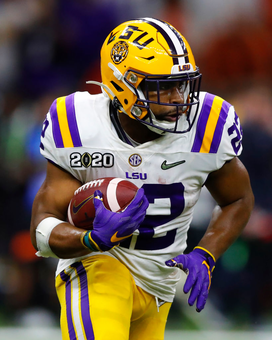 Ian Allan answers your fantasy football questions. In this edition: Revised projections for Clyde Edwards-Helaire. Which draft position is the best? Sifting through kicker prospects. And Tampa Bay's format-dependent defense.

With Damien Williams opting out, it looks as if Clyde Edwards-Helaire will have every opportunity to win a starting job. Assuming he does, where would you select him in a 10-team, 1/2-PPR draft?

We might be looking at another Kareem Hunt. Hunt in 2017 finished with the 4th-best running back numbers, including 1,782 run-rec yards and 11 TDs. Edwards-Helaire is a neat little player, and he very productive at LSU last year, rushing for 1,414 yards, with 55 catches for another 453. He averaged 124 run-rec yards in his 15 games, with 17 TDs.

For me, there’s no way I would ever consider taking him before any of the top 3 running backs: McCaffrey, Barkley, Elliott. But he’s definitely in my top 15. I like him more than guys like Carson, Singletary and Montgomery. I think he looks comparable to the dozen running backs after the top 3. I expect I’ll stick him about in the middle of that group. Ekeler, Drake, Chubb, Jacobs, Mixon – I think he’s similar to those kind of guys. I expect to slot him in the early second round of typical drafts, but I don’t think he’ll be around at that point. There were a lot of people selecting CEH in the second rounds even before Williams opted out.

If not in the top 6 draft slots in a 12-team PPR league, where do you think is the best spot (picks 7-12) given a typical snake draft?

I look into this a couple of times every summer. Different leagues, sizes and scoring systems. I can’t remember a time when the No. 1 pick didn’t come out on top. That makes intuitive sense. By definition, you’re getting the best of the first-round picks, and first-round picks are more valuable than second-rounders. Then you start over, and third-round picks trump fourth-rounders.

Anyway, for a 12-team PPR league, I ran the numbers and that No. 1 spot came out on top, as expected. But I was surprised to see the No. 8th spot finishing second, and just a point back. Not a huge stat difference between the 12 spots, however, with all teams within 8 points of the overall average.

On this kind of thing, I’m using my projected stats and operating under the assumption that I’m making the selections for all 12 teams. In reality, for most of the picks, you wouldn’t be picking your expected player but somebody a few spots higher (since the other 11 team owners who have their own preferences, with different draft boards). On the “points” in this chart below, they represent not total production but the amount above the identified baseline players at each position – you’re not getting Patrick Mahomes’ total production, but how much better he’ll be than about the 18th-best quarterback.

Need help sorting through kickers. My league gives bonus points for 50-yard FGs. I have Austin Seibert with the Browns who may finally put their offense together. Other options include Zane Gonzalez (up-and-coming offense and kicks indoors), Jake Elliott (weather a factor later in season) and Brandon McManus (thin air and up-and-coming offense). Keep Seibert or take one of the above?

I’ve got them all ranked between 9th and 15th at the position – not a ton of difference between them. With McManus, you can kick around the ideas of thin air and long field goals, but he’s been playing there for years and that’s never really occurred. Over the last five years he’s kicked 17 of 33 field goals from 50-plus yards – below-average accuracy. If you select McManus, it’s with the hope Denver’s offense takes a nice step forward. With Gonzalez, he really cooled off last year. He scored a league-high 76 kicking points in the first half of last year but a below-average 51 in the second half of the season, when the offense started doing a better job of putting the ball in the end zone. As for Elliott, he’s been hurt by the Eagles tending to score touchdowns rather than field goals. They’ve ranked only 16th and 22nd in kicking points the last two years. With Seibert, the Browns have ranked 31st and 20th in kicking points the last two years; if you take him, it’s with the hope Kevin Stefanski’s offensive changes pay dividends.

I do not understand why the value of a defense varies with the nature of the scoring system. Tampa Bay, for example is ranked 10th in the Standard System and 21st in the PPR system (on pages 26 and 27 of your magazine) even though the scoring for sacks, takeaways, and returned TDs are identical.

In the standard format, defenses are ranked solely on the trifecta of takeaways (2 points), sacks (1 point) and touchdowns (6 points). In the PPR format, a “points allowed” component is added, and it’s significant. Each week, defenses receive a bonus for holding opponents under 24 points. Allow only 20 points and that’s worth 2 points. Allow only 10 and it’s worth 7. A shutout is worth 12. Allow 23 and a half point is award. Allow 28 points, on the other hand, and a defense is docked 2 points. It’s a half point per NFL point wherever the defense lands, making it the most important stat in this particular scoring format. If you’re using a format driven by sacks and takeaways, you should be looking at the standard rankings. According to our projections, the Bucs will rank in the top 10 in sacks and just outside the top 10 in takeaways.

Ian Allan answers your fantasy football questions. In this edition: DeAndre Hopkins' big debut. How good is Gardner Minshew? Long-term prospects for Bryce Love and AJ Dillon. And should a Herr macht schnell for Benny Snell?

What team has scored the most points in a playoff game in the Super Bowl era?