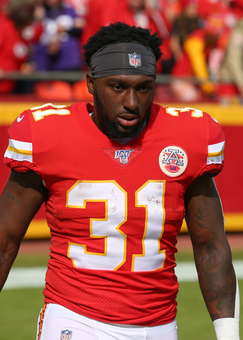 I would like to see a variety of ideas of contingency plans Commissioners are fielding for their leagues for what happens if the season is cut short. I'm already considering adding 3-5 IR spots on a roster and waiving transaction fees for COVID-related illness only, but what happens if the season only goes 7 games? 9 games? What are others implementing for their leagues? Looking for ideas to present. Any help would be appreciated.

I have a few different thoughts. For starters, if they cancel a few weeks of the NFL season, you should be able to complete your fantasy schedule. Suppose, for example, Weeks 5-7 are canceled. In your fantasy league, you could then re-schedule those games into Weeks 8-10, with each team playing a double-header.

As far as money goes, any number of things can be done that are fair, but all will be more agreeable if they’re agreed upon beforehand. I like the rule of thumb that if at least half of the fantasy schedule is played (with the NFL season then disbanded), all of the money is going out, with the first-place team at that time being considered the winner. If we play less than half of the season, perhaps the winner/leaders get some recognition or reward, but the season is considered abandoned. Maybe in the less-than-half-season scenario, the winner is paid out that portion of the prize money (25% of the season = 25% of the pot) with the other money either refunded or pushed forward in the 2021 pot.

Matt Tinker’s league (see the next letter) is going to best-ball scoring. That might help reduce the possibility of franchise owners not realizing that a player was a late scratch after a COVID test.

You raise the idea of creating a COVID reserve list. If a player is placed on the NFL’s COVID-reserve list, I suppose, fantasy teams would be have the ability keep him around without him using a roster spot. Sounds reasonable, but the rules will need to be carefully mapped out. What happens, for example, if Darrell in accounting has three guys on the COVID list. They’re activated by their NFL team on Wednesday, but Darrell isn’t around. In fact, he’s gone to Monterey for four days with his fiancée. How long does Darrell get to carry three extra guys on his roster? If a player is on the COVID list, can I pick him up and then place him directly on our reserve list? That might seem like an arcane question (because it is) but there are guys in every league who are looking to exploit angles. What if, for example, Benny Snell of the Steelers was on the COVID list. Snell isn’t on any roster in our league. Then James Conner suffers a season-ending knee injury at Cincinnati. Snell isn’t going to be back for another week or two, but his value has changed dramatically. Perhaps when penning this rule, it should include the clause that fantasy teams can only use the COVID-IR stash for players who were on their roster before they tested positive for COVID at the NFL level. If you want to stay away from the special rules and challenges of adding a COVID reserve list, perhaps just give each team an extra roster spot or two to work with (but keep in mind that will reduce the number of serviceable players available on your waiver wire).

If there are others with COVID rules suggestions, I imagine they’ll share them in the comments section.

Because of all the uncertainty relating to COVID and it wreaking havoc with weekly line-ups, we are changing to best-ball scoring for 2020. With that in mind, it got me to thinking about how that would affect my draft strategy. We have small benches. My initial plan with our normal format was to go for the big studs, and leave my last RB and WR spots weak with the intent I'd either stream them or wait to see which rookies panned out as the season progressed. Now, with the best-ball format, I'm thinking maybe a more balanced approach may be the way to go. For example, a cheap QB duo of Brady-Roethlisberger may be better than, say, a duo of Mahomes-Bridgewater. … I've plugged our scoring system into the 'custom ranking and auction values' you provide, and it spits out Mahomes and Lamar as being basically worth twice as much as any other QB. But now with best ball, I'm thinking their value decreases some. Your thoughts on how moving to best ball might alter one's roster construction/draft strategy?

You’re the second person I’ve heard suggest moving to a best-ball format, and I think it’s worth consideration. It provides a patch against players suddenly being scratched on Sunday. It also opens up some different strategies that I find intriguing. I would think you would see a lot more people, for example, carrying two kickers and two defenses, reducing the potential of a misfire at those spots. And I think you would see a lot more activity on the waiver wire, with teams looking to incrementally increase their odds each week by tweaking the lesser players on the roster. There are erratic hit-or-miss receivers who hit on a long bomb once in a while – think DeSean Jackson and Mecole Hardman. Their value is increased in this kind of format. Those who like to stash players on their rosters (backup running backs or starters who are out with injuries) will need to recalculate those probabilities. In best ball, the valuing of roster spots changes. Instead of using a spot on a player who might be really good at some point in the future, you can use it right now on a lesser player with some nominal potential to put up starter-level points every week. You lose the dimension of deciding on a starting lineup, but there might be more decision-making with the roster each week. Folks would need to determine whether to carry three quarterbacks rather than two. Circling back to the original question, I would not downgrade Patrick Mahomes in best ball. He’s going to be a difference maker in whatever system you’re using. I pushed around some numbers on this. Consider Lamar Jackson, who was the clear No. 1 quarterback last year (putting up the kind of production that many expect out of Mahomes in 2020). If we pair Jackson with the 21st-best quarterback (Gardner Minshew), we get 504 points of fantasy production in the first 16 weeks of last year. If you instead had a combo of the best two quarterbacks not in the top 10 (Jared Goff and Aaron Rodgers last year) you would have finished with 366 points – 138 fewer points. If you instead went with a trifecta of the best quarterbacks not in the top 10 (adding Philip Rivers) you would have finished with 409 points (95 fewer than Jackson-Minshew). In the first 16 games of last year (an NFL season’s worth of action) Jackson-Minshew went for 40 TD passes and 7 TD runs. The Rivers-Rodgers-Goff combo went for 33 TD passes and 2 TD runs.

Everyone knows that if KC settles on one bell-cow RB they will be a fantasy monster, especially in PPR. CEH may have the most talent and is definitely the future but he is also the least experienced. Darrel Williams has the most experience with KC's complex system. DeAndre Washington has experience with Mahomes from their Texas Tech days. My thoughts are "Who can pass protect?" Is there a standout of the group that would be trusted by Mahomes and Reid therefore might get the opportunity to start?

There are five running backs on the roster: Clyde Edwards-Helaire, Darwin Thompson, Darrel Williams, DeAndre Washington and Elijah McGuire. I think Edwards-Helaire will be the featured guy from the beginning, possibly putting up top-5 numbers. Kareem Hunt put up great numbers as a rookie, and I’m thinking CEH could have the same kind of impact. Washington, I think, looks like the front-runner for the backup spot. He might be their best pass-catching back, at least initially. He caught 36 of the 41 passes thrown his way last year in Oakland. And he got plenty of experience playing in spread offenses at Texas Tech. If something goes wrong with CEH (he gets hurt or is struggling to pick up the offense) I think it will be Washington who moves into the starting lineup. Williams (and I appreciate you taking the time to spell his name correctly – Darrel with only one L) is notable in that he’s different than the other four. At 224 pounds, he’s their only big back. There’s been a bunch of bigger, slower backs who’ve come out of LSU, including Jeremy Hill and Spencer Ware, and Williams could be one of those guys. With him being different than their other backs, I think he’s more likely to carve out some kind of role than Thompson, who made a couple of nifty runs in the preseason last year but didn’t really do anything in the real games. McGuire was a sixth-round pick of the Jets in 2017; I remember seeing him in the preseason that year and thinking he looked pretty good. New York’s main backs at the time were Bilal Powell and Matt Forte (at the end of his career) and I didn’t see much difference between McGuire and those guys. I’m not promising McGuire will make the team (the Jets, after all, did cut him) but it it’s possible. Right now, I’d be willing to throw a late-round pick at Washington but not any of the others.

Full PPR league with 1 keeper who can be retained indefinitely at same round drafted. Have Kamara in round 15 and Chubb in round 14. Suspect Kamara may outscore Chubb this year with Kareen Hunt in the mix but likely gone 2021. I really like Chubb as a runner, think underrated as receiver, and like new offense coming in. Am struggling with the idea of keeping Chubb instead of Kamara. Thoughts?

I don’t have any strong thoughts on these guys. They both like ideal keeper candidates at their respective price tags (I wonder if your league bylaws would allow you to trade the keeper rights to one of these players?). Chubb is a year behind Kamara, contractually. Kamara is entering the final year of his rookie contract, hoping for an extension. Chubb will be at that point next summer. With Kamara’s game being more tied to the passing game, he might have a longer career.