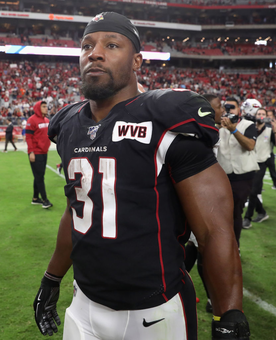 Who will be Comeback Player of the Year?

ASK THE EXPERTS appears weekly from training camp through the Super Bowl with answers to a new question being posted Thursday morning. How the guest experts responded when we asked them: Among 2019's biggest disappointments, who will be Comeback Player of the Year?

While I cannot provide a slam-dunk name, the one big player that really disappointed in 2019 and is set up to reclaim his spot in the elite fantasy category is David Johnson in Houston. Provided he's healthy, he could rise back to the top 5 fantasy running backs, since the Texans plan to rely upon him heavily in their offense.

All indications are that A.J. Green is fully healed from the foot and ankle injuries that torpedoed his 2019 season. While Green is aging and certainly an injury risk, he's still a formidable pass-catching weapon and should return to triple-digit targets in a Zac Taylor-led offense that has some real potential with No. 1 overall pick Joe Burrow at the helm. Green has averaged over nine targets per game throughout his career and if he can return to that form, he's going to post solid numbers and be a big value in the sixth or seventh round.

Smith’s work can be seen at FantasyData.com.

JuJu Smith-Schuster should come roaring back with Ben Roethlisberger back under center and a better schedule this year. Smith-Schuster turned in a stat line of 111-1,426-7 in 2018 though he did get some benefit from coverage slanted towards Antonio Brown. He's the clear No. 1 wideout and suffered through Mason Rudolph and Devlin Hodges last season. He's a third-round pick this year with first-round potential.

I have mentioned David Johnson in the past, but I will go back to him again. He’s been pretty dreadful in recent years, but I don’t think the Texans would have taken on that contract and given away DeAndre Hopkins if they didn’t believe he was going to be a great fit with their offense. I’ve done a half-dozen drafts so far, and Johnson has been my third-round pick in most of them.

The question in Cleveland is, which Baker Mayfield will we see in 2020? Will it be the record-setting TD tossing rookie or the turnover-prone sophomore slumper? I recently watched a replay of Baker's 2018 debut, a Thursday Night Football game where Tyrod Taylor (mercifully) got hurt and Baker rallied the team from 2 TDs down, unlocking Bud Light coolers all across NE Ohio. As a Browns fan, that was easily the most excited that I have been in years. This year the Browns seem to have a talented coach in Kevin Stefanski and the NFL's top running back tandem. With a return to health of Jarvis Landry and OBJ, plus an improved O-Line and tight end group, Cleveland is thinking playoffs. This season, Baker should rebound from a dismal 2019 and project to 25-30 TDs and between 3,500-4,000 yards passing--similar to last years stats for Kirk Cousins, Stefanski's quarterback in Minnesota.

I'd like to answer A.J. Green or Ben Roethlisberger, but I suspect I will be too wary to actually draft either aging veteran anywhere. Green is certainly a strong possibility, since he comes from such a low point of being injured for nearly two full calendar years. But I think quarterback is more likely, and since I don't trust Roethlisberger to stay healthy, I'll go with Matthew Stafford. Last year he was on pace to throw for 5,000 yards and 40 touchdowns when he got hurt midseason. Give me something close to that for a full season and he'll be a star -- and earn the comeback award that no one really wants to win (since they don't want to have to come back from something).