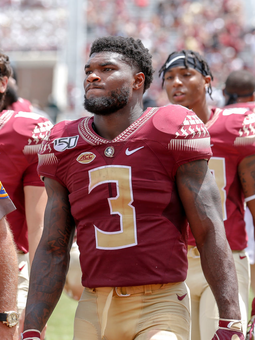 After CEH, who should be the 2nd rookie drafted?

ASK THE EXPERTS appears weekly from training camp through the Super Bowl with answers to a new question being posted Thursday morning. How the guest experts responded when we asked them: After Clyde Edwards-Helaire, who should be the 2nd rookie drafted in fantasy leagues?

The second rookie drafted will be Jonathan Taylor and that is no shock given that he ran for over 6,000 yards in three years at Wisconsin. But my choice would be Cam Akers. He's the prototypical size for a running back and offers a dual-threat with his 69 career catches at Florida State to match with his two 1,000-yard rushing years. With him, it is as much situation as anything. This may be a cooler year for rookies in general, but his only competition for carries comes from Malcolm Brown who only averaged 3.7 YPC last year and spent all five career years with the Rams proving he was just a backup quality back at best. He was undrafted and never had more than 69 rushes in any season. Darrell Henderson is a third-round pick, but he only managed 39 runs as a rookie with a 3.8 YPC average. There is likely somewhat of a committee to start, but no reason that Akers shouldn't exert himself sooner than later as the primary back and most talented player in the backfield. The Rams scored 17 rushing TDs by running backs last year. They ran in 19 in 2018. Akers ran in 14 touchdowns last year at Florida State behind a bad offensive line in an offense that had little besides him.

From my viewpoint, Jonathan Taylor should be the second rookie drafted out of the class of 2020. He has size, 5-foot-10 and 226 pounds and speed, with a 3.9 40 at the combine. Overall, he has talent and opportunity which makes him a likely candidate for success. Keep in mind though that drafting rookies is far from being a science. Just a few years ago, the top two rookie running backs were Carlos Hyde and Bishop Sankey. Hyde has had a mediocre career, while Sankey was a complete bust.

Nease has written about fantasy football since 2001 and has played the game since 1985. Mike is a senior staff writer at Big Guy Fantasy Sports. In 2018 and 2019 he won the championships of four experts' leagues: FF Webmasters, FanEx Analysis Draft, FanEx Auction league and also the FanEx Main Event. He also won the Couch Tomatoes Auction league in 2018.

I believe Jonathan Taylor will be the 2nd rookie selected in most fantasy drafts, but I like Cam Akers more. I think Akers will be used a lot more as a receiver. Taylor isn’t much of a pass catcher, and the Colts have shown a willingness to not throw much to their running backs. Marlon Mack is probably a better pass catcher than Taylor and has caught only 17 and 14 passes the last two years. Not that Akers is a superb pass catcher, but I think he’ll be better than Taylor. And I’m not conceding that he might not also run for more yards and touchdowns. Sean McVay has displayed a tendency for running the ball plenty around the goal line, with the Rams scoring 17, 23 and 20 rushing touchdowns in his three seasons — at least 3 more than the Colts every year. Both of these backs are in competitive situations. Taylor and Mack, I think, will both get plenty of carries. With the Rams, Akers is trying to separate from Darrell Henderson and Malcolm Brown.

I'll go out on a limb and say Cam Akers. Highly productive at FSU, among the leaders in school history in a number of stat categories, had 18 total TDs in 2019, seems to have a great attitude. Rams are run/pass balanced and Akers can do both. So, as a 3-down player in the former Gurley role, he is arguably set up best to be the bellcow running back of all the rookies; in the right place at the right time. Taylor, Swift, Dobbins--all have competition, at least initially. Akers' backups look like warm bodies who'd only play if Akers gets hurt or gets COVID.

Has to be a running back, as passing systems around the league are sufficiently complicated that the weirdo offseason leaves everyone else that much farther behind the curve. I’ll eliminate D’Andre Swift, as I don’t love how the Lions run their offense as a whole, and also guys like A.J. Dillon and J.K. Dobbins, who are low enough on their depth charts that if you really love one you won’t have to make him the second rookie selected. So it’s Cam Akers or Jonathan Taylor, the former of whom looks like a fit for heavy use in the system where Todd Gurley scored 14 touchdowns in a terrible season in 2019, and the latter of whom had a glossed-over but very real ball security problem in college. Give me Akers, by a lot.

Jerry Jeudy. Give me a wide receiver rookie any day of the week. Jeudy was the best receiver in a stacked class. He will help Drew Lock with his great route running, speed, concentration and good hands. Love this guy!

I'd like to answer this question a little bit differently. Although Joe Burrow certainly won't be the second rookie drafted in fantasy leagues, he's somebody I'm confident about. The Bengals have excellent skill talent on offense, and I suspect the defense is going to be a mess. Burrow is a little bit older for rookie, which I actually view as a positive thing. I think he'll be a quality fantasy starter in his first season.

Definitely a running back, and several promising candidates. Jonathan Taylor and D'Andre Swift had the earliest draft capital, though they're also unlikely to be Week 1 starters. Marlon Mack and Kerryon Johnson should open as No. 1s, although Kerryon might not stay there very long. I have enough respect for Mack that I think Taylor will need to thrive on just 30-40 percent of the work most of the season. So for me it's either Swift or Cam Akers in Los Angeles, looking like the best chance to start early. Nothing proven in front of Akers, but for now I believe them when they talk of a committee, while I think Swift is talented enough that he could be the lead back quickly. So I'll go with Swift, who should be a big part of a strong passing game as soon as Week 1 or 2.