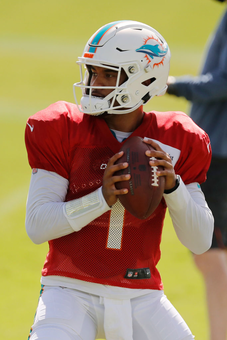 How will no preseason games affect the season?

ASK THE EXPERTS appears weekly from training camp through the Super Bowl with answers to a new question being posted Thursday morning. How the guest experts responded when we asked them: How will no preseason games affect the season?

I expect the first couple of games to be fairly sloppy, simply because of the unique challenges of 2020. I am not sure how to make this actionable. I've been leaning into continuity wherever I can, but veteran players can accumulate rust, too. Heck, if they can simply navigate the NFL schedule through September without major catastrophe, I think I'll be satisfied. The key is to apply what we learn in September and get moving soon after that.

Not a huge deal, except in one respect: any rookie who sees the field but then makes a mistake will be making that mistake when it counts, and I bet at least a couple of them don’t get to play through it. I am particularly wary of rookie running backs who enter the league either completely untested in pass protection (Antonio Gibson is almost completely untested in every aspect of playing the position) or with ball security issues (hence my aversion to Jonathan Taylor).

Thoughts: Rookies will be behind from the start and slow to recover (not nearly as much acclimation to the big leagues this year). Of course running backs may be slightly advantaged in that running is less finesse than throwing and catching. Rookie quarterbacks and wide receivers, forget about them this year. Think dynasty and long-term not short-term greatness in 2020 drafts. Players who changed teams will also be further behind. So lower expectations of players like DeAndre Hopkins and Austin Hooper. Running backs (think Todd Gurley) will find the transition easier. Any teams passing game will be sloppier at the start of the season...enough said. Most teams' running game will look/do better because it is easier to execute and defenses will not be as polished in defending against it (tackling drills/real experience tackling etc.) Finally, more injuries, yes....dogs and cats living together....mass hysteria!

Everyone will need to rely more on their initial analysis. That might be a good thing. Every year in the preseason games, there is a player or two who plays very well in the preseason games, only to fall flat in the real games. David Montgomery last year, for example (as well as he played in the preseason, he looked like he might be one of the top dozen running backs as a rookie). This year, there’s a bunch of good rookie receivers, and everyone is kind of flying blind with these guys. With the 12 selected in the first two rounds, I’m comfortable assuming that Jerry Jeudy and CeeDee Lamb will have viable roles. And I think we can put Brandon Aiyuk in that group. But with most of the other nine receivers in this group, you can’t really say with certainty what you’re going to get. Guys like Henry Ruggs, Jalen Reagor, Tee Higgins, Michael Pittman and Laviska Shenault could have good roles, or they might be hardly playing at all in September.

Training camps have just opened and we're already digesting a steady stream of soft tissue problems like hamstring tweaks and muscle pulls, plus other stuff to include concussions, ACLs, etc. Many players are in shape, but not in football shape. Whether a team has pretty much stayed intact, or made wholesale changes, 4 weeks of training camp doesn't completely substitute banging against other teams. Sloppy play for awhile? Count on it.

The lack of preseason games has to impact the level of play, at least for those teams that are installing a new offense (CAR, CLE, DEN, JAC, MIA, MIN, NYG, WAS). Having minimal changes in personnel should be an advantage, especially in the offensive line and with receivers. This should provide the biggest surprises of any Week 1 and beyond than any other year. These are professional athletes and should show up ready to play and without too many additional injuries like hamstrings and such. But the NFL is a league where precision and consistency are everything. This is the year where rookie receivers should really bear the brunt of lack of preparation. I'm skipping them all in redraft leagues. All of the projections and rankings I do for The Huddle take into account how much change a team is going to have this year and they are downgraded for it. There is simply no way that a team can perform optimally without practice and pregame reps. This is the year that the rich get richer and the poor get poorer.

Obvious I know, but I'm certainly concerned about rookies. They won't be taking live hits or trying to block determined opposing pass rushers until September, so it's inevitable they'll start out slow and perhaps be more mistake-prone early on, costing them snaps. Certainly there's a smaller chance of somebody like Tua Tagovailoa (pictured) starting the first month. Otherwise, I am not expecting much in the way of differences. Veterans play less and less each August anyway, so some of the sloppiness we'll see was there in past years, too, we might just be more focused on it in 2020.