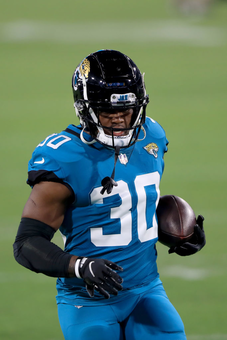 A pair of young, unheralded running backs were featured on Thursday night. James Robinson and Myles Gaskin. Where do those players fit into the long-range plans for those teams.

Robinson runs hard. Too hard, you could argue. He takes a lot of big hits; those kind of collisions tend to result in injuries and fumbles. But he doesn’t have much speed or elusiveness. He’s a try-hard guy. A better version of Peyton Barber, you might say. He’s a feel-good story, but a year from now, I would think he’d be more likely to be a backup or committee back, rather than a clear starter.

I’m familiar with Gaskin. He played his college ball across the lake at Washington, going over 1,000 yards every year. It’s been good to see him clawing his way to relevance after a quiet first season. He’s a much better pass catcher than veterans Jordan Howard and Matt Breida, making him a better fit with Miami’s current offense.

Gaskin has caught 4, 6 and 5 passes in their first three games, and he looked good as a runner at Jacksonville. At least for a while. On their first drive, he opened with 7 carries for 35 yard, but his final 15 carries went for only 31. Regardless, he’s got some vision, and he’s a lot more elusive than Howard. I don’t know that Gaskin will still be starting next year at this time, but he looks like he’s going to be in the league for a few years.

When Miami drafted Gaskin (in the sixth round) he was listed at 5-foot-10 and 193 pounds. Small guy. But he’s been working at it. In their opening roster this year, they’ve got him 7 pounds heavier.

I don’t know that either back (Robinson, Gaskin) helps you a ton long term. But they’re playing right now, and that’s worth something.

Below is my list of the top 100 backs for dynasty leagues. This is assuming PPR scoring, and with the assumption that once you’ve got a player, you get him for as long as you want to keep him. That is, you can stash away a backup like Alexander Mattison, Benny Snell or Chase Edmonds, and if they ever become a starter, you’ve got them.

I hit one position (for dynasty purposes) each week. It was quarterbacks last week (and you can find that via the “past issues” box on the right side of the screen. It will be tight ends next week.

When you see the other rankings we compile, they involve carefully projecting all of the individual stats. With these ones, they’re simply done by hand. I spend about an hour slowly going over the list, making adjustments, until it feels right.