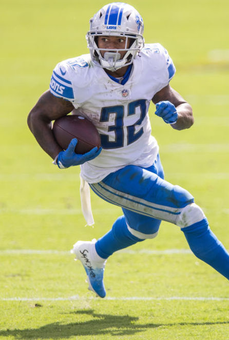 Is D'Andre Swift the best of the rookie runners?

We’re over halfway through the season, and I don’t think we’re any closer to knowing with any certainty which of the rookie running backs will have the best career. There are eight, I think, that could wind up being that guy.

Most recently, I’ve been liking D’Andre Swift more. He’s really outstanding in the passing game, and he’s been coming on as a runner. Teammate Adrian Peterson says he noticed Swift’s talent early on (and was surprised they didn’t move him into a more featured role sooner). Swift (concussion) won’t play this week, but he’s looking like he’ll be a successful back.

Neither Clyde Edwards-Helaire nor Jonathan Taylor has had a great rookie season, but I’m not giving up on either guy. They’re both on good teams, and I think both will get better with more experience.

Similarly, J.K. Dobbins hasn’t lit it up in his first year, but the talent is apparent. I think he’ll bubble to the surface of Baltimore’s backfield – he’s 9 years younger than Mark Ingram.

James Robinson wasn’t even drafted, but he’s got more yards in his first season than all of those guys. He doesn’t have elite-level speed, quickness or power, but he runs hard. Doesn’t look like he’ll be leaving the starting lineup in Jacksonville anytime soon.

Antonio Gibson has more than met expectations for Washington. I think he’ll be their starting running back next year, and that’s a coaching staff that really knows how to feature a tailback. Will be no surprise if he puts up top-10 numbers in 2021.

I am also warming up to Zack Moss. The dude runs hard; he’s strong below the waist. He seems to have more juice than their other young running back, Devin Singletary, and seems to be moving up in that backfield.

And finally, I will include Cam Akers among the eight rookie running backs with some chance of being the Best of Class. Akers hasn’t done much yet, but if he can take charge of the backfield for the Rams, that’s an offense that can make a running back looking really good. Sean McVay likes calling run plays around the goal line.

Two other rookie running backs are worth a mention. Something less than those top 8, but guys who could make some noise next year: AJ Dillon and Salvon Ahmed.

The rankings below show how I would select the running backs if walking into a dynasty draft today. Dynasty as in long-term, with teams allowed to keep players for as long as they want. You draft D’Andre Swift, and you get him not only for 2020 but also 2021, 2022 and all of his other remaining seasons. So when in doubt in this kind of league, the tendency is to go with the younger players.

I’m assuming PPR scoring, and rookies are tagged with black dots. The final column (“Prev”) shows where the player ranked when I did running backs last time four weeks ago.

For dynasty leagues, I address a different position each week, rotating between RB-RB-TE-WR. To see previous weeks use the “Past Issues” navigation tools on the right side of the page.