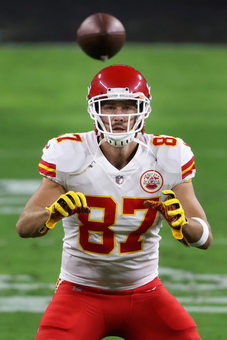 Who are you most thankful for?

ASK THE EXPERTS appears weekly from training camp through the Super Bowl with answers to a new question being posted Thursday morning. How the guest experts responded when we asked them: Happy Thanksgiving! Which player are you most thankful for this season?

Aaron Rodgers and Travis Kelce. Rodgers because his bounce back year has been a game changer if you waited on QB and got him late. Kelce because he has dominated the TE position (mainly because of injuries to Kittle and Ertz) so much. Those two alone could be winning you your fantasy league with a few games before the playoffs. Also thankful Dalvin Cook has not been injured. Hope I did not jinx myself I have Cook in a ton of leagues in he has an easy schedule with no cold weather games ahead.

Most thankful for James Robinson, the current No. 4 fantasy running back and a player that was mostly found on the waiver wire right after the Jaguars dumped Leonard Fournette at the last minute and promoted a guy that was never drafted. He's saved my bacon and is one of the greatest examples why the waiver wire is your friend and that your team can be upgraded between when you draft it and when they play in Week 1.

Kyler Murray has been fun to watch. He’s tiny, but he can really run. I don’t think we’ve seen a quarterback quite like him. If he can stay healthy, he could become the first quarterback to finish with 4,000 passing yards and 1,000 rushing yards. (He might also throw 30 TDs while running for double-digit scores.)

I very much want to name James Robinson, the Little Running Back Who Could, or Chase Claypool, who is already the player I dreamed he might become when I first saw his SPARQ numbers. But reflecting on all I am thankful for in my real life reminds me to speak up about what is constantly great — so reliable, both in presence and in ability to amaze, that I am too often guilty of letting my appreciation go unstated. No more. For twenty-seven months now Patrick Mahomes has been the immovable center of my fantasy football life. The greatest real player, sure. The greatest Mississippi Queen, ever. My favorite weeks are when he plays a late game — SNF, MNF — and I wake up Sunday morning thinking “we just gotta keep this close; Patrick will win it.” But what I mean to say here is that my gratitude does not hinge on whether he does, in fact, win it. Waking up believing is enough.

As a Browns fan, and with all the challenges that 2020 has dumped upon us, I'm thankful for Nick Chubb and Kareem Hunt. With the exception of Chubb's 4-week hiatus due to injury/bye week, he and Hunt have combined for consistent production in yards, receptions, and TDs for most of the season. In fact, the Houston game was the first time since 1966 that the Browns had two 100-yard rushers in the same game. While the rest of the Browns have underperformed, Chubb and Hunt have the Browns thinking playoffs. Playoffs?! Yes, the Browns are going to be playing meaningful games in December for the first time since forever, and they play the Jets during Fantasy Super Bowl on December 27th. Have a safe and enjoyable Thanksgiving everyone!

Two that stand out for me are Terry McLaurin and Justin Herbert. McLaurin produces at a pretty good clip week after week, despite (or perhaps because of) being Washington's only credible receiving threat, and while catching passes a lot of the way from a pretty lousy collection on passers in a stodgy, unimaginative offense. I also considered Calvin Ridley here, an Index pick who's really paid off. With Herbert, there's proof that you can wait on a quarterback and still get elite production, from a guy not even drafted in most leagues. He's been amazing, putting up big numbers week after week in lost causes, and with a coach that probably would have left him buried behind Tyrod Taylor most of the season but for a medical screwup. Glad to have him on several teams.