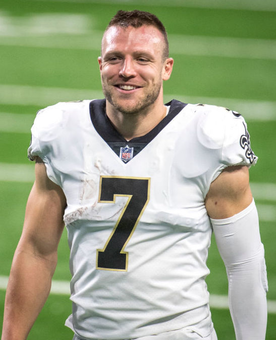 I picked up Taysom Hill this week, and plan to start him Sunday ahead of Brady. I already have Kamara, Lutz and the Saints Defense. I don’t mind loading up on players from good teams — but can you have too much of a good thing?

Lutz and Kamara are right up there near the top at their positions. It would be hard to start them. And the New Orleans defense is looking very good. It’s been coming on, having allowed only one touchdown in its last 12 quarters of play. It’s playing against the offense that’s turned the ball more often than any other. And while Hill is a little bit of an unproven wild card, he’s a running quarterback. The stats tend to accumulate more quickly for that style of quarterback (rather than a pocket passer). I’ve got Hill well above Brady on my board for Week 12. So I will sign off on the Saints Four-Pack.

Given Burrow's season ending injury, what is your ROS outlook on Higgins and Boyd in PPR?

Burrow passed for more than 300 yards five times. He threw multiple touchdowns four times. I don’t think they’re going to get that kind of quarterback play from either Ryan Finley or Brandon Allen. Both started three games last year, and neither showed any sign of being a viable NFL quarterback. Finley averaged only 158 passing yards in his three starts, with 2 TDs, before they pulled him and went back to Andy Dalton. For Denver, Allen averaged 172 yards in his three starts, with 3 TDs. So if you’re holding Higgins or Boyd, I think the best production you can hope for right now is about 180 passing yards per week, with perhaps 5-6 TD passes in the final six games. If that’s the kind of production we’re talking about, it would be hard for either Higgins or Boyd to be a top-40 wide receiver in December.

In a TD-dependent Dynasty league, which RB are you keeping to close out the final few weeks? Gallman, Perine or Edmonds?

For 2020, definitely Gallman. The Giants have been coming around. Joe Judge is doing a nice job with them. They’ve been playing hard all along. They were blown out by San Francisco back in Week 3, but they’ve been in all of their other games. New York started the season 0-5, but they’ve gone 3-2 in their last five. They averaged 79 rushing yards in those first five, but they’ve averaged 142 in their last five, with 7 TD runs. And Gallman is the guy punching in those scores. He’s scored four games in a row.

But the question includes the word “dynasty”. If we’re including 2021 and 2022 in the thinking, I will go with Chase Edmonds. He looks like a pretty neat player to me, and I imagine he’ll get his chance to deliver some good starts at some point. If I would live without Gallman for the remainder of the 2020 season, I would keep Edmonds.

Wait. Alexander Mattison not even listed in RB re-Draft? Cook goes down and Mattison is a top-10 back. That HAS to be a mistake.

I’m glad you brought this up. At this point in the season, with just a few games left, there is a shift in how I put together the rankings for the Redrafter (and I suppose I should call it the Re-drafter, so it’s not confused with a Red rafter). For the bulk of the season, I’m using a combination of numbers, carefully calibrating them so that high-end backup running backs like Mattison, Benny Snell and Carlos Hyde tend to show up around 35th to 45th among running backs. These are guys who are an injury away from possibly having top-10 value at their positions. But at this point, with just a few games left, the probability of getting an injury-replacement start is getting pretty slim. So I kind of let those go and instead am just listing them by what they’re doing in their current backup roles (which isn’t much). If you were in a must-win situation, you could conceivably release such a player for somebody who might help in Week 12 (a player who you would never select over Mattison at the start of the year). At this point in the season, we’re trying to focus more on properly scouting and projecting the individual games, rathering the ordering players as if you were walking into a start-from-scratch draft (which nobody is doing). Redrafter rankings in late November are something different than what you saw in September and October.

He could still be a good player. Guys can get better in their second seasons. His teammate, Darrell Henderson, is evidence as much. I expect that when the Rams take the field in 2021, it will be with Akers and Henderson as a one-two punch of running backs. If you were to cut Akers loose, I would think he would be selected between 7th and 12th in that draft. I don’t have strong feelings on the trade either way, but I think I would lean towards hanging onto Akers and giving him the opportunity to develop into the back you were hoping for. (But if the trade gives you a 1-in-5 chance at having one of the top few picks, I'm not opposed to going that route either.)