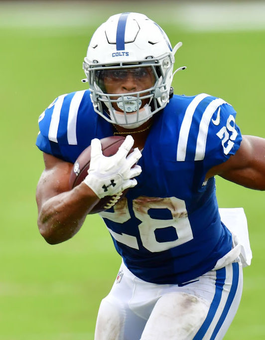 Ian Allan answers your fantasy football questions. In this edition. Taysom Hill could be a secret weapon tight end in some fantasy leagues. Or not. When does one cut bait on a struggling rookie running back like Jonathan Taylor? Adding punters to fantasy leagues. And more.

Taysom Hill is listed as a TE in my league. Any insight into if he is worth taking a flyer with Brees out?

If Taysom Hill starts at quarterback for the Saints, he’ll put up better numbers than any tight end in the league. So for your league, it would make a lot of sense to add Hill to your roster. The Saints haven’t indicated yet whether they’ll be starting Hill or Jameis Winston. If they go with Winston, there’s some chance that he struggles, with Hill taking over in Week 12. And they could use a combination of the two quarterbacks, with Hill appearing a lot more as a change-of-pace option.

But this is all guesswork at this point. If we wind the clock back a year, the Saints were in the same situation after Drew Brees injured his thumb at Los Angeles. I thought they would go with Hill as their starter (I thought he was way better than Teddy Bridgewater in the preseason games that year). But they not only didn’t start Hill, they also didn’t use him much at all as a change-of-pace quarterback. I’m not sure if that was fueled by them feeling they couldn’t afford the injury risk, or if they felt Hill needed the practice reps to be prepared in case he needed to take over. Regardless, for 2020, I think the plan should be to make a waiver claim on Hill, but to not use him unless you’re pretty sure he’s going to have some kind of quarterbacking role.

Major League Baseball history is filled with stars who began their careers with subpar rookie seasons. Mike Trout and Anthony Rizzo are some of the more recent examples. I am curious as to how often this happens in the NFL, particularly at the running back position. This season, a significant number of fantasy pundits seems to remain high on Colts rookie Jonathan Taylor. One would hope his career isn't reminiscent of D.J. Dozier's.

Always nice to hear from E.J. Degerman. It’s not mentioned in the letter, but E.J. was not only in my first fantasy league, he had the best team. Ravenna Raiders, 1986, with a 10-3-1 record. That was a wildly unusual year for fantasy football, with a bunch of really good players showing up from the USFL. E.J. was ahead of the curve in seeing that Herschel Walker would be better than Tony Dorsett in Dallas. Other picks: Ken O’Brien, Kevin Mack, Al Toon, Todd Christensen. But I digress.

Slow starters at running back. There have been many of them, including two Fosters (Arian, Barry) and two Jamals (Anderson, Jamaal Charles). O.J. Simpson didn’t have a good rookie season. I pulled out some numbers, and you can see them below. They show the 55 running backs who’ve run for over 1,500 yards in a season since the merger. (If a player did it more than once, I’m showing just his best season – 55 different guys.) We can then look at how each of those guys did in his first season. We can see that over a third of them ran for fewer than 600 yards in their rookie year, and over a fifth of them averaged fewer than 4.0 per carry. I’ve got them in chronological order, and a guy is tagged with a black dot if he flaws short of either of those thresholds.

These kind of numbers indicate that nobody should be given up on guys like Jonathan Taylor and Clyde Edwards-Helaire just yet.

In my deepest league, thinking about proposing adding punters as a position. What scoring would you suggest? Net yards? PPP (Point Per Punt)? Negative for TDs scored?

I tried to get punters added in my league years ago. Crickets. Absolutely no interest. The proposal that I was putting forward involved looking at the net average of the two punters involved in the game. If my punter is better than your punter, my team gets 2 points. If your punter is better, you get the 2 points. The thinking was that it would be an almost-nothing position, but that once in a while it would swing a game.

In a dynasty league where you keep players as long as you want, with no salary cap, I’ve been offered Jonathan Taylor straight up for Keenan Allen. I do need RB help. Taylor hasn’t flashed. Do you think the best for him is yet to come? What do you think of the trade?

I’m not giving up on Taylor. I think he can come around. There’s a chart in a different letter this week, underscoring that plenty of running backs get a lot better are so-so rookie seasons. But in this case, I wouldn’t want to give away a known, butt-kicking commodity. In Justin Herbert, the Chargers appear to have stumbled onto one of the next great quarterbacks, and Keenan Allen will be his clear No. 1 option for the next few years. In their first eight games together (a half season of work) Allen has caught 61 passes for 653 yards and 5 TDs. That’s despite missing over half of one of those games. I wouldn’t want to trade away that kind of production on the hope that Taylor gets a lot better. I think I’d rather just have the guy that we already know is really good.

Will you please elaborate on your relatively low rating for Michael Pittman, both for Week 11 (#73) and for ROS (#64)? As you noted, the Colts are struggling to run effectively. And while having to rely on Rivers is definitely a negative factor, Pittman strikes me as being clearly the Colts' top receiving option; Hilton has lost a step and is no longer much of a threat, Pascal is mediocre, and the tight ends are minimally involved.

You’re operating under the assumption that Michael Pittman is clearly the No. 1 receiver on the Indianapolis roster. I’m not at that point yet. I’m not certain that he’s better than either T.Y. Hilton or Zach Pascal. And I believe they’ll continue to also work in their other wide receivers, Marcus Johnson and DeMichael Harris (the rookie they just activated who’s been running end-arounds in every game). It’s a diverse group, and it’s a pretty feeble passing game. I’m not sure that Philip Rivers can really play anymore. So far, he’s thrown 3 TDs in a pair of games against really bad opponents (Bengals, Lions) but just 5 TDs in his other seven games. We’re in the second half of the season and the Colts have thrown 2 TD passes to wide receivers.

Can I get updated dynasty rankings for running back and wide receiver? I know you post it every so often but would appreciate one soon.

I post revised dynasty rankings every Saturday. Running backs will be coming up this week. The last version of wide receivers was posted on November 7. It rotates between the four key positions: QB-RB-TE-WR.

With the looming trade deadline, I've been offered the following in a PPR league. For starters, my only RBs are Cook, David Johnson (on IR), Hines (got today) and Jamaal Williams. My WRs are Lockett, Shepherd, Parker, Crowder, and Beasley. The offer is...I give up: Kyler Murray, Lockett, DJ, and Taysom Hill for Rodgers, Tyreek, Drake, and McKissic. My RBs have been a weakness all year behind Cook. Murray and Cook alone have me sitting at 8-2. Am I over valuing Murray (he's outscored Rodgers by 50 points thru 10 weeks!) by not considering this? Tyreek definitely an upgrade from Lockett. Rodgers is a downgrade (but has a better remaining schedule) to Murray. Not super excited about Drake, but probably better than DJ at this point, but what about when DJ comes back in a couple weeks? You have him ranked at #58 on the redrafter. McKissic provides a little added depth over Taysom Hill whose value beyond this week is cloudy. Sit tight with what I got and what's got me here? Or make the deal?

Without thinking about too carefully, my gut says make the trade. Lockett has an injury that might be a factor. Johnson is on IR. Hill is a shot-in-the-dark question mark. Murray is doing some amazing stuff, but there’s massive injury risk, and I see some defenses coming up on the schedule that I think will do a better job against him – Patriots and Rams twice. Hill definitely trumps Lockett. McKissic provides some usable depth. Drake definitely beats Johnson.