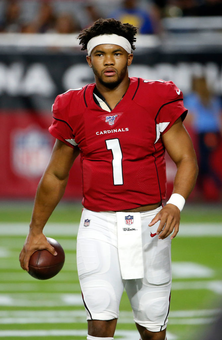 How long can Kyler Murray be great?

Kyler Murray has had a great season, but I wonder if it’s sustainable? He’s really small, and his greatness has been strongly tied to his ability to scramble around with unique quickness. How long can that last?

Murray is tiny. They’ve got him listed at 5-foot-10 and 207 pounds, and he looks smaller. If teams can do a better job of taking away his productive runs, will he be able to effectively work out of the pocket? In recent weeks, he hasn’t been effective against the Seahawks, Patriots and Rams. Some of that decline might be tied to a shoulder injury, but it could also be that defenses are getting smarter about how to play against him.

So as we look at the next few years – 2021, 2022, 2023 – I wonder if a fantasy franchise might be better hitching the wagon to Justin Herbert or Joe Burrow. Those guys don’t have the elite, difference-making scrambling ability, but they’re safer choices (I think) operating out of the pocket.

Burrow, of course, is out for the season with a torn ACL, but I’m not giving that too much weight. These are dynasty rankings, so I’m looking more at what’s going to be happening in the next few years. I’m not working under the assumption that your team is going to have a playoff game next week.

Patrick Mahomes is the easy choice at the position. For my next two, I’m going with Deshaun Watson and Herbert; they’ll likely both have new coaches and new offenses next year. Russell Wilson has been pretty awesome at times this year, but he’s seven years older than those guys, which is factored into these kind of forever rankings.

In the second half of the top 10, Aaron Rodgers is a tough guy to figure. He’s been great this year, but he’s 37 – getting near the end of the road. I’ve got him surrounded by a bunch of guys who aren’t as good today but have a lot more football left, including Josh Allen (24), Lamar Jackson (23) and Dak Prescott (27).

I don’t think Drew Brees is playing next year, so I’ve got him well down on my board.

I hit dynasty rankings every Saturday, with the focus rotating between QB-RB-WR-TE. To see rankings from previous weeks, use the “Past Issues” navigation tools on the page. I’m assuming standard scoring, with a 12-team league and teams tending to carry about three quarterbacks each. Rookies are tagged with black dots.

The final column (“Previous”) shows where the player ranked when I last looked at this position (four weeks ago).