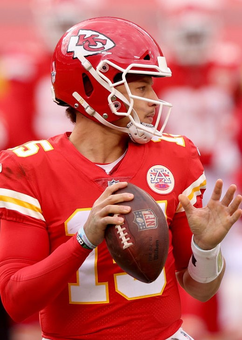 Who should be picked 1st in playoff league?

ASK THE EXPERTS appears weekly from training camp through the Super Bowl with answers to a new question being posted Thursday morning. How the guest experts responded when we asked them: Who should be the top pick in a playoff fantasy league?

Kansas City is going to win the Super Bowl, and Patrick Mahomes is going to be why, so it should be him ... unless you have a perfect read on the NFC. If an unexpected team is going to emerge from that side, and that unexpected team is Seattle, with its great quarterback but no great tight end, there’s a fair argument to be made that you can win the league by taking Travis Kelce and then coming back for Russell Wilson in Round 2. But that’s the only exacta I’d consider getting cute with (the other NFC quarterbacks are on chalk teams or aren’t good enough), and even then you probably lose Wilson before Round 2 gets back to you, and even if not you might be just as well off with Mahomes-Metcalf (or Mahomes-Lockett if need be) as with Kelce-Wilson. In other words, again, it should be Mahomes. Take the guy who will definitely score the most points from the second week of the playoffs forward, then two guys you believe will play four-not-three games at the Rounds 2-3 turn.

Alvin Kamara is my choice. First, the Saints are not the No. 1 seed so they play in Week 1 against one of the two weakest teams in the tournament. Next, New Orleans arguably has the best top to bottom roster in the NFL and they have a great shot at going to the Super Bowl. Finally, Kamara is incredibly productive, leading the league with 21 TDs.

In any playoff draft, the first pick should be the player with the best chance for overall highest points, obviously, and that can only be Patrick Mahomes. As he showed last year and again this season, Kansas City is going to win games and keep playing. It may not always be a huge win, but they will be wins. And it is always central to Mahomes who was a near magician in the playoffs last year in the way that his team always fell behind, always hit that mark where it all seemed over and yet Mahomes would got hot in the second half and always get the job done. It was amazing to see as a football fan, and a treat for fantasy owners.

Formats vary, but typically quarterbacks are key in most playoff formats. I see a lot of parity at the top. I’d be very happy with Patrick Mahomes, Aaron Rodgers or Josh Allen. I’m going with Allen over the other two. I really like the way the Bills are playing. I’m feeling that he’s just as likely as those guys to play three games, and I think there’s a chance (more than an outside chance) that Buffalo will play in four games (and if they play in four, he’ll be miles better than everyone). I don’t think Allen’s passing stats are all that far behind those other guys, and he’s a much more active runner than those guys (with 8 TD runs in the regular season). Very little separation between those three, but put me down for Allen.

Lots of different ways to answer this question. Do you want the greatest talent (Mahomes), the guy with a chance to play four games (Allen), or the guy who not only might play three or four games but has the biggest separation from the others at his position (Kamara)? In playoff leagues I see people hedge their bets with the favorites, or go all in one team (Packers, Kansas City, Buffalo) and focus on those stars -- hoping the playoffs will go that way and give them the edge. But when it comes down to it, Mahomes seems like the safest choice. I think we can all see the Bills, Saints or even Packers getting upset a lot more easily than we can see Kansas City coming up small in a playoff game. I would take Mahomes.