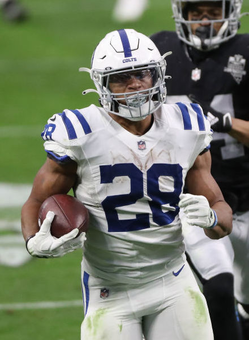 Would you keep Justin Herbert or Jonathan Taylor for 3 years?

Herbert is the more notable real-life player. But in the fantasy arena, running backs tend to be far more valuable. In most formats, teams are required to start a lot more running backs, making them harder to find. And Taylor has come on nicely, looking like he might be one of the league’s top half-dozen runners over the next three years. The Colts have one of the better offensive line, and they’re more committed to running the ball than most teams. Taylor’s their guy, and he came on nicely late in the year. He closed with 253 yards against Jacksonville, and he ran for 90, 91, 150, 83 and 74 in his previous five.

In your situation, I think you’ll do better keeping Taylor, then picking up a quarterback at some point in the draft. That combination of Taylor + Quarterback X should be more productive than keeping Herbert and trying to find a running back.

What is the best way to deal with owners not starting a full lineup? In our league, Team A had wrapped up first place in the regular season going into the final week. Teams B and C were tied, with Team B holding the tiebreaker. Team A was playing Team C in final week. Team A's kicker was ruled out that Saturday morning and they did not bother changing their lineup even though they had a second kicker on their bench. As a result, Teams A and C tied while Team B played the highest score that week and lost. The suspicious take is that Team C was clearly the weaker team to have in the playoffs. And of course in the end Team A wins the championship while Team B, if they had made the playoffs would have taken the championship. We are actually thinking of changing the format to eliminate head-to-head. Your thoughts?

I like head-to-head. It’s not as fair as simply using total points (or perhaps all-play record), but it adds value in other ways. It makes the week-to-week action more compelling. There will be key showdowns, and weeks where wins and losses are hanging in the balance on Monday night. I’m in a couple of the more performance-driven leagues every year, and with those, it typically becomes very apparent right away which few teams have any chance of winning the title, with everyone else quickly losing interest. If you switch, you’ll crown a more deserving champion most years, but it will come at a cost. No longer will you have mediocre teams hoping to win their last two regular-season games in hopes of weaseling into the playoffs – hoping to get hot at the right time. They’ll just be also-ran teams. I think most of the owners in your league will find that they prefer the more luck-involved head-to-head format.

I know you've often advocated drafting backup RBs. In my partial keeper league, RBs get drafted early and often so, with Carson, Mostert and Akers as my "starters", I drafted Carlos Hyde and Latavius Murray (who did almost nothing). Later, when desperate for production, I tried picking up Darrell Henderson, Pollard, AJ Dillon, and Damien Harris with minimal success. I missed on guys like Gallman, Robinson, Gaskin, DeeJay Dallas and Jeff Wilson because others beat me to the punch when I thought my backups would come through. Unless transactions are really limited, it seems that drafting backup RBs early is a poor strategy because, once the starter gets hurt, the backup is now part of a committee situation. I would submit that the better draft strategy is to get a solid backup at QB, then some No. 2 WRs, before beating the bushes for backup RBs. Then, if your starters get injured mid-season, place your trust in the unknown young RBs that are now in a great situation.

There’s a lot of competition for running backs. Any time a starting running back gets hurt, there will be substantial competition for the player slated to replace him. With that in mind, I think it makes a lot of sense to try to be ahead of the curve. Any time you draft a running back, some consideration should be given to also selecting his backup. And any time there’s a promising No. 2 running back on the waiver wire, it makes sense to fit him onto your roster if you can find the room. Guys like Alexander Mattison, Chase Edmonds, Carlos Hyde, Benny Snell and Latavius Murray didn’t pay big dividends this year, but in most years, when you pick a few of those guys, there will be some good weeks involved. Additionally, we need to recognize that some teams and players will be a lot better than we expect. I had low expectations for Washington and Jacksonville, causing me to undervalue Antonio Gibson and James Robinson. The better move would have been to get those guys on my rosters to see what happened. Similarly, when Saquon Barkley performed poorly the first two weeks of the season, it caused me to undervalue what might happen with that team for the rest of the season. So rather than simply dismiss Devonta Freeman and Wayne Gallman out of hand, the better course would be to get those guys rostered. Roster sizes are limited, of course. There are always a bunch of semi-decent looking guys available on the waiver wire. But with running backs, when a player shows any brief flurry of potential (as Gallman did in the second half of the Thursday night game in Philadelphia) that’s the point where he should rostered on the off chance he’s developing into something. If you wait another week, then everybody in your league is onto him, and it’s tougher to get him onto your team.

When Eli Manning started 210 consecutive games for the Giants, it was Geno Smith who ended the streak – starting a game at Oakland in 2017. Sunday at Pittsburgh, Smith will start for the Seahawks, ending Russell Wilson’s run of 149 straight games. Who is the only other quarterback who has been the next man up after two streaks of quarterbacks starting at least 100 games? Said player is the all-time passing leader for a franchise (most career yards and touchdowns).