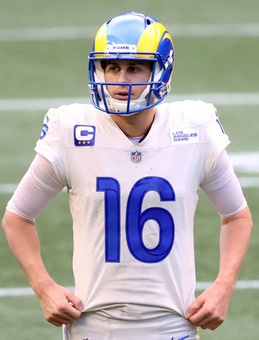 Ian Allan answers your fantasy football questions. In this edition: What to make of the albatross contracts of Jared Goff and Carson Wentz. James Robinson's future in Jacksonville. And defending against tanking teams in a fantasy league.

Jared Goff and Carson Wentz went #1 and #2 overall in the draft. Both signed huge contract extensions and now it appears both are on shaky ground with their teams. Which of the two do you think is most likely to be traded? And if so, what teams do you think would be willing to take them on?

With their contracts, I don’t think either of them is going anywhere this year. They’ll remain with the Rams and Eagles for the 2021 season. Of the two, I think Wentz is more likely to salvage things. He’s played at an MVP level in the past, and he’s been hampered by extenuating circumstances. He had a serious knee injury, and the Eagles were undermined by offensive line issues last year. The Eagles fired Doug Pederson, and I think the thinking there is to bring in a coach who can fix Wentz – they picked Wentz over Pederson. The Eagles traded away multiple first-round picks to get Wentz and signed him in a huge extension; I think the thinking is that they need to give it another year to see if they can get him back to being a top-10 quarterback.

With Goff, it seems more like the Rams are simply realizing they erred badly in giving him a big contract. He’s had the players around him and he’s been healthy. It just seems like he’s never going to be more than a lesser starter. He’s got a nice arm, but with no ability to make plays off script. There’s no mobility, and he doesn’t have that Brees-Brady ability to be a Jedi when he’s looking at how defenses are lining up. They’re paying him $33 million, and the team would be a lot better if they were using a cheap quarterback and allocating that money elsewhere. So with the Rams, I think it’s just a case of them waiting to get rid of the contract at the right time. They’ll release Goff next year. With Wentz, he might also be released in a year (some would say that he will be released in a year) but there’s more of a chance that he might turn things around.

I have James Robinson in my keeper league and he had a terrific season much of which was due to little or no other running back competition. I know very little about Urban Meyer so wondering what type of offense he is known for and how that might impact Robinson.

I would think Robinson will be an opening day starter for Jacksonville. Let’s see who else gets added in free agency or the draft. I would think they’ll be looking to add another viable player at that position, possibly going to more of a committee approach. I don’t know how heavily Meyer plans to get involved in the offense. He’s hired Darrell Bevell to serve as their offensive coordinator, and he’s one of the most experienced coaches in the league at that spot. Using standard fantasy scoring, he’s overseen eight offenses that have ranked in the top 10 in rushing production. All of those offenses, however, had Adrian Peterson or Marshawn Lynch starting at tailback (none of Bevell’s last four offenses have ranked higher than 20th). Bevell’s last 10 offenses have averaged 124 rushing yards per game and 13 TD runs per season.

Bevell more recently has emphasized the pass. His last five teams have all ranked between 7th and 12th in passing (again, that’s using standard fantasy scoring). All of those teams, however, had a high-caliber quarterback under center (Russell Wilson and Matthew Stafford). This upcoming Jacksonville team should have Trevor Lawrence starting at quarterback, and he might be an above-average starter in his first year.

I missed responding to the question about Team A not starting his best lineup at the end of the year to help another team win. We are a head-to-head league. I have been keeping track for a few years of BAD BEATs and LUCKY WINS. A Bad Beat is when the 2nd- or 3rd-highest scoring team of the week gets beat. A Lucky Win is when the 2nd-or 3rd-lowest scoring team for the week gets a win. There were a lot, and a lot of complaints. This past year we continued to use Head-To-Head, but added an additional Win for the top six scoring teams that week, and an additional loss to the lowest scoring teams that week. Problem basically solved. We use the CBS website for our league. In addition to our weekly head-to-head schedule, after the final game of the week I added a second set of pairings ... win the top 6 scoring teams against the bottom six scoring teams. That way the standings was always updated.

That could be a nice way to go. It retains some of the selling points of the head-to-head format while also giving the good franchises a better opportunity to eventually win out. Thanks for writing.