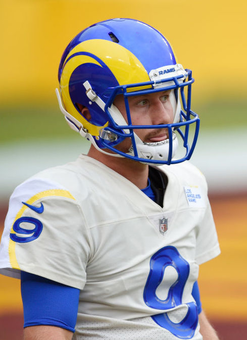 Ian Allan answers your fantasy football questions. In this edition: Shifting through the scrap-heap quarterback options for Week 17. What to make of the 18-week schedule in 2021. Weighing Travis Kelce against running backs in keeper leagues. James Robinson's 2021 value. And more.

On the strength of Davin Cook, Tyreek Hill, and McManus I've overcome Goff at QB and made it to our Super Bowl. I've got decent subs at RB and WR, but I'm stuck at QB. I picked up Henne early thinking he could do well if Mahomes went down during the season. My backup until now has been Glennon. Or I could pick up Wolford or maybe Rudolph for this week. I'm leaning towards Henne but wondering if he'll have the receivers to throw to and the line to keep him upright. What do you think?

I’m a John Wolford fan. The Rams put out on their Twitter feed footage of him tossing a touchdown pass at Houston in a preseason game last year, and it looked like a really nice throw. Aaron Donald was talking him up in an ESPN interview. “He’s getting his opportunity to step up and play a huge role to help us win this game, and I’m confident,” Donald said. “ The abilities that he has that I’ve seen through camp, through practice, the way he prepares, the way he gets himself ready, there’s no doubt in my mind that this guy’s going to go out there and play at a high level and do what he needs to do to help this team win.” Wolford has good mobility; he ran for 10 TDs his final season at Wake Forest. The Rams still have Sean McVay drawing up the plays. I’m kind of wondering if the Rams will even have any dropoff at the position. I like Wolford a lot more than guys like Henne, Glennon and Rudolph.

I've been using your schedules under the resource tab since I bought my first Index magazine back in 1998. We have a 10-team league, six teams make playoffs, division winners get a bye, and we crown a champion in Week 16. It's a balanced schedule as well with each team playing their division opponents twice and playing every team in the other division once. Well with the NFL looking to expand the regular season to 18 weeks, what's the best course of action for commissioners in 2021? I could add another regular season game but unsure how to determine who plays who. I've seen others recommend a two-week championship game. The site we use doesn't accommodate that so it would need to be a hand calculation. Curious what your early thoughts on it are?

You could add another game. Each team’s opponent would be its matching opponent in the other conference. That is, the two teams finishing 3rd in each conference in 2020 would play each other in 2021. The two teams finishing first would play each other. Not ideal, but one way to do it. You could also add a week with no opponents, with everyone playing against everyone else. In such a week (which could be placed anywhere in the schedule) the five highest-scoring teams would get wins, and the five lowest scores would get losses. If you want to make it a little spicier, perhaps designate that the two middle teams of the 10 receive not wins or losses, but ties. Readers are encouraged to weigh in with other suggestions.

Non-PPR keeper league. We have Alvin Kamara as a no-brainer #1 keeper. For our #2, do we keep Myles Gaskin or Travis Kelce? I feel RB are way more valuable in the non-PPR format.

Running backs are more valuable. But in this instance you’re weighing a running back who might be his team’s best running back in 2021 against a player who probably will be one of the top 3 players at his position. And that’s probably being conservative with Kelce. Most likely he’ll be the best or 2nd-best tight end next year. He’s really good, and they get the ball to him a lot.

With Gaskin, what degree of certainty do you have that he’ll even be Miami’s most productive running back? He’s a nice player who did some good things; I like that he can both run and catch. He’s averaged 68 rushing and 38 receiving yards in the seven games he’s started, with 4 TDs. But I don’t know that they’re locked in on him being their featured back next year. Maybe they drafted or sign somebody. Their other former University of Washington back, Salvon Ahmed, had a couple of good games as a rookie. Maybe they go to more of a committee approach. If you were given the option of having either Gaskin or the best other running back on that roster next year, I’m not sure I would take Gaskin. So for your keeper, I would take Kelce, hoping to solve the running back problem later.

With the unexpected success of James Robinson with poor QB play and presuming Jacksonville drafts Trevor Lawrence, what are your thoughts on Robinson's future?

Jacksonville didn’t really have a viable second running back this year. They used Chris Thompson some in passing situations, but they didn’t really have a true backup. Ryquell Armstead was supposed to be that guy, but he spent the entire year on the COVID-reserve. So I suppose they’ll add another viable running back, either through free agency or by picking one in perhaps the third or fourth round. They’ll have a new coach and a new offense. Maybe they move to more of a committee approach at running back. So it’s early, I think, to be assuming Robinson will be cranking out big numbers. But a nice player. If I were walking into draft today, I would think Robinson would be about the 15th running back chosen. (That’s just off the top of my head.)

Have an idea for the Ask The Experts column: what experience do you have with the perfect season? I have been doing fantasy football for 26 years now and this year is the first time I have ever seen anyone pull it off (I ended 15-0 winning the championship).

Congratulations on an unusual feat. I don’t think I’ve been involved in one. I’ve been playing for 35 years, at perhaps five leagues per year. Maybe 150 leagues that are of the head-to-head variety. I don’t think anybody in any of those leagues ever ran the table. I can recall one instance where a team went 14-0 in the regular season, but that franchise then lost in the playoffs (which was kind of crappy).

Hi Ian, Just writing to thank you for another championship year! I was down 30 points heading into the Monday night game but Stefon Diggs bailed me out. I picked him up at 6.08 following your guide! Can’t wait for next season! I’ll need all the help I can get at 1.12 and 2.01... Thanks, Dave in SF

Congrats on the championship. I wouldn’t worry too much about the draft position. In our league, the two highest-scoring teams were the two drafting at the end of the first round.