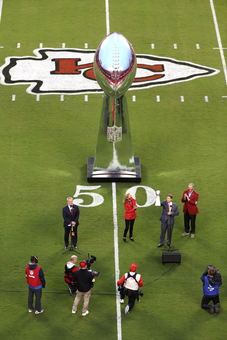 Fun wagers based on the big game

It probably doesn't need to be said that a large part of watching the Super Bowl involves friendly wagering. Pretty much everyone is in some square pool to support the local cheerleaders or baseball team. (Including me; I'm rooting for the number 8, which basically means I threw my money away.) And there are lots and lots of prop bets, too.

I steer clear of silly ones like what color the Gatorade will be and who will win the opening coin toss. If I'm going to gamble, I at least want there to be some analysis to the whole exercise. So the following 9 choices are largely based on the game previews I've already written, although there have been some changes (like Antonio Brown practicing fully yesterday, and Cameron Brate popping up on the injury report with a neck injury.) There are plenty of online sites listing prop bets, I went with Caesar's Sportsbook.

Total TD passes by Patrick Mahomes: OVER 2.5. In my projections I actually had Mahomes at exactly 2.5, which doesn't help. But the way the Bucs play defense, stifling the run in terms of both yards and touchdowns, I think it's more likely Mahomes makes it up to 3 than finishes with just 2. I'll take the over, and my chances.

Receptions by Travis Kelce: OVER 7.5. In his last 10 games, Kelce has exactly 8 catches seven times, and more than 8 catches twice (including 13 in the last game). He has one game with only 7 catches. I think that being over 7.5 in 90 percent of his last 10 games is worth betting on, particularly when you factor in that Tyreek Hill should be more of a defensive focus in this matchup (after going for 269 yards in the regular-season meeting).

Total rushing yards by Leonard Fournette: OVER 48.5.I had Fournette at 61 yards in my projections, so I kind of have to make this bet. He's their main back right now and there will be some rushing production, at least to keep Kansas City off-balance. Not a huge Fournette fan but 49 rushing yards over the course of the game seems reasonable.

Total sacks in the game: OVER 4. In the previous meeting there were only 3, but since that time the Tampa Bay pass rush has gotten better and Patrick Mahomes has lost his left tackle. May or may not be bothered by a toe injury. Whatever the case, I'm pretty confident the Bucs will sack Mahomes at least twice and straight off my projections I've got them likely to finish with 3. I also think Kansas City will get Brady twice, although he was sacked multiple times in just 7 of 19 games this year. But I think there will be a lot of passing in this game. It's a little hazy from the site but I think exactly 4 sacks is a push. If you LOSE with 4 sacks, don't bet this one.

Receptions by Mike Evans: UNDER 4.5. This one I don't feel as great about, but Evans has primarily been a scorer and big-play target for Brady -- not a target monster. He caught 10 passes in the blowout against Detroit (not relevant) and 6 in the playoff win at Washington. In his other six most recent games, including the regular-season meeting with Kansas City, he caught 3, 3, 6, 3, 1 and 3 passes, including just 4 total in the last two playoff games. I doubt I'd actually bet this one because who needs the stress of hoping a player like Evans doesn't catch 5 passes in the Super Bowl. But the body of evidence suggests while he's the team's best bet to score, about 4 catches looks right.

What will be said first: COVID or masks/pandemic: I've seen a couple of variations of this one, and because of the period of time we're in, I'm willing to bet it. Nobody is going to say masks or pandemic without first using the term COVID to wake up the casual viewer. It's happening.

What position will the Super Bowl MVP play: QUARTERBACK or other? It's the lazy, easy vote, and that's the way the voters most often go. Of the previous 54 Super Bowl MVPs, 31 (57 percent) were quarterbacks. With two of the game's very best quarterbacks ever playing in this game, it will be awfully surprising if the winner doesn't have a big game and get the award.

As always, I can't strongly urge anyone to use these recommendations for actual wagering of large sums of money. But if I had lots of disposable income, these are the bets I'd make and feel pretty good about winning more than half of them.