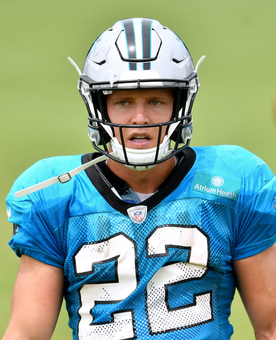 Most expect McCaffrey to bounce back

ASK THE EXPERTS appears weekly from training camp through the Super Bowl. This is our final question of the season. How the guest experts responded when we asked them: What is your preliminary Top 10 for the 2021 season?

With my list, I’m assuming we’re not using a Superflex format, so no quarterbacks would be in my top 20. Great as guys like Mahomes, Rodgers and Allen might be, you look at the quality of quarterbacks who’ll be selected in the fourth, fifth and sixth rounds, and the numbers suggest the correct way to build a team will be to instead start with the elite players at the other field positions. I don’t see a ton of difference between the top six running backs, and I think Davante Adams can also be in the top-of-the-draft discussion.

Here is my baker's dozen:

I've come around to the idea that a too-heavy workload one year has ramifications in years to come. We saw it with Christian McCaffrey, and it has me wary of certain running backs who have also been heavily used the last year or two. It's difficult, though, to actually drop these players from the top spots. Heavily used is what we're looking for when it comes to selecting players to lead fantasy teams, after all. But might be nice to have a later pick in 2021, so you can select the 10th and 15th best players rather than the 1st and 24th. On the bright side, at least my top 2 weren't heavily used in 2020.