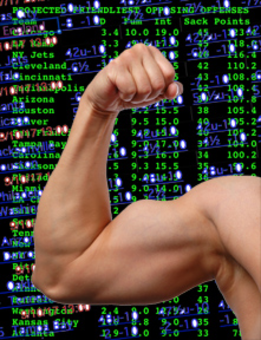 Do offenses benefit from easy schedules?

I have been updating my strength of schedule files, and let me share a few numbers while I’ve got them in front of me. Scheduling hasn’t been super meaningful in recent years.

I’m not going to spend half a day writing up a complete report on the topic, but I’ll say this: If you take the teams that appear to have the easiest schedules in August, then look at how things tend to play out, there doesn’t tend to be much of an advantage.

On this one, I took the three teams for each season dating back to 2003 that projected to play the softest defenses. For this one, I didn’t use wins and losses but instead focused on points allowed by defenses. If teams are playing opponents that allowed a whole bunch of yards and points last year, the theory is that should put them on the inside track to finishing with more yards and points. That’s the theory. So I figured I’d take those 54 teams (3 x 18 years), then look at what happens to them during the season as it’s played. Do they, in fact, play easy schedules? And do the offenses of those teams usually benefit?

It didn’t happen last year. By points scored, the Cowboys, Saints and Washington were supposed to play the three easiest schedules. But as we look back at the 2020 season, now that it’s been played, we can see that Dallas instead played the 3rd-hardest schedule. Washington played an average schedule (17th). New Orleans (8th) at least ranked in the top 10.

It was similar the previous year. Arizona, Seattle and Baltimore were supposed to play the three easiest schedules. The Cardinals and Seahawks finished 6th and 11th (good for Arizona, and above-average for Seattle) but only four teams played harder schedules than the Ravens.

Go back to 2018, and strength of schedule was almost a reverse barometer. The Jets, Patriots, and Jaguars were supposed to play the three easiest schedules, but they instead all played bottom-10 schedules.

Over the last 10 years, 9 of the 30 teams that were supposed to play really easy schedules inside played bottom-10 schedules. Only 10 of those 30 easy-schedule teams ended up playing schedules that did, in fact, rank in the top 10 in easiness. About a third (11) of those 30 teams played middle-of-the-pack schedules, ranking somewhere between 11th and 22nd.

If we look at the full 18 years (with 54 teams), 26 of those teams played schedules ranking in the top 10 in easiness. That’s almost half, and I suppose that’s decent. (I’ve got those teams in bold in the chart below). Thirteen of those 54 (about a quarter) ranked in the bottom 10 for scheduling purposes. (I’ve got those team names tagged with black dots.)

In the chart below, you’re seeing a “rank” number. That’s where the team’s schedule actually ended up ranking in easiness. If the team’s opponents allowed the most points in the league, it ranks “1”, if they allowed the fewest, it ranks “32”. (All of the teams back in August were supposed to rank 1st, 2nd or 3rd, but I didn’t list those numbers.)

When you draft one of these teams, it’s with the hope the easy schedule will help it outperform expectation. That correlation doesn’t show up strongly. Of these 54 teams, 24 of them actually scored fewer points than they did the previous season (those point totals are tagged with black dots). Two teams scored the exact same total. Exactly a third of the teams (18 of 54) improved their scoring by at least 3 points, but keep in mind that scoring has been climbing up all along.

When you’re sifting through mid-round picks in August, I don’t think strength of schedule should be a huge consideration. I think there are better factors to be considering.