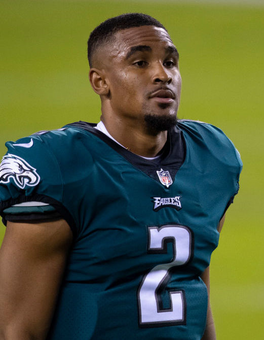 The running production looks secure. Hurts isn’t quite as nimble as some other quarterbacks (Kyler Murray, Lamar Jackson), but he’s a physical dude who moves well and isn’t afraid to break tackles, if necessary. At 6-foot-1 and 223 pounds, he’s built like a tailback. He’s like a more mobile, more physical version of Steve McNair.

Hurts went for over 60 rushing yards in his first three starts last year, then ran for 34 yards and 2 TDs against Washington before Doug Pederson decided to throw that game, playing for improved draft positioning. I’m comfortable working under the assumption that Hurts will run for at least 700 yards and 7 TDs.

Hurts as a passer looks a lot iffier. He went over 330 passing yards in two of his four starts, but he completed only 52 percent of his passes. Every regular starter in the league last year, including Drew Lock and Sam Darnold, completed at least 57 percent. And Hurts in his four starts threw only 5 touchdowns, with 6 fumbles and 3 interceptions.

Hurts oddly last year averaged 13.8 yards per completion, hitting on a bunch of long balls. That’s a higher average than any of the league’s regular starters, but I think opponents will do a better job of defending him this year.

At best (I think) Hurts will be a bottom-10 passer, and he might be a lot worse than that. He might be right down near the bottom.

In the past 20 years, I see 26 quarterbacks who ranked in the top 5 in rushing but the bottom 5 in passing. This is using per-game numbers, and considering only quarterbacks who started at least half the season – about 32 quarterbacks each year.

Of this group, only 11 of the 26 finished with top-20 per-game numbers. And only three ranked higher than 12th. So if Hurts winds up in this group, but most likely he’ll be a chosen as a second quarterback and fall short of expectations.

If you select Hurts, it’s with the hope he can do a bit more as a passer.

Consider the following chart. It shows last 18 quarterbacks who were top-5 runners and bottom-10 passers. (That is, still lesser passers, but not all the way down in the bottom 5). Of this group, over half of the players ended up finishing with top-15 stats on a per-game basis.

Only four of these quarterbacks finished the season with top-10 numbers.

For me, my sense is Hurts belongs more in the second group. I don’t think he’ll be a top-10 quarterback on my board, but I would be interested in selecting him as a second quarterback in a typical 12-team league.