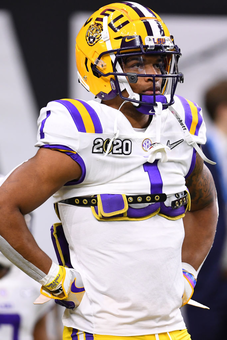 The draft is a couple of weeks away, and there’s a good chance a couple of wide receivers will be chosen in the top 10. Maybe three. The last time that happened, it didn’t go well.

The hit rate on receivers in the top 10, in fact, has been remarkably low. In the last 15 years, 18 wide receivers have been chosen in the top 10. Five have proven to be very good selections. But the other 13 … not so much.

The last time wide receivers were chosen in the top 10, there were three of them – Corey Davis, Mike Williams and John Ross in 2017. None of those guys has ever finished a season with top-25 PPR numbers. Neither Davis nor Williams has been a disaster (Williams scored 11 TDs in one season) but in hindsight, neither of those teams for a second would have considered selecting those guys where they did.

On my scorecard, I see five “hits”. Calvin Johnson, Julio Jones, Mike Evans, A.J. Green and Amari Cooper. Of the remaining 13, Michael Crabtree and Sammy Watkins have had some serviceable moments, but neither is a top-10 overall kind of guy.

There’s one odd receiver on the list below. Braylon Edwards had one kick-ass season for the Browns, with 80 catches and 16 touchdowns. But he was otherwise a disaster.

Note that on the list of “hits”, the top four come with super-human traits. Megatron, Julio, Evans and A.J. Green were freaky athletes who could physically dominant. (I consider Amari to be the final member of the Five Hits – not up there with the top guys physically or in production – but he’s been a good pro).

With this in mind, it makes me a little more nervous about the three heralded receivers coming in. The two Alabama guys (DeVonta Smith and Jaylen Waddle) are smaller guys. With JaMarr Chase (pictured), you’re getting a guy who didn’t even play in 2020, and he doesn’t have the same kind of speed or size as those elite players. He’s got ordinary size (6-0, 201) and ran about 4.4 at his Pro Day.

For me, I haven’t seen enough from these incoming wide receivers that I would consider taking them ahead of some of the other elite prospects. I would think Penei Sewell, Kyle Pitts and Patrick Surtain should be selected earlier (especially with teams knowing that serviceable wide receivers will be available in the later rounds).

The five big hits, I’ve got them tagged with black dots. The final column shows where the player ranked among wide receivers in that season (using PPR scoring).