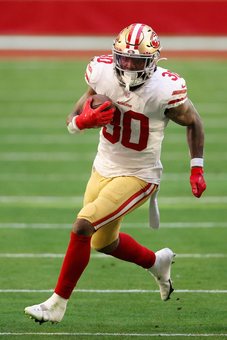 We've talked a little bit about San Francisco's backfield this offseason. It's a crowded one, bringing back Raheem Mostert and Jeff Wilson, signing Wayne Gallman, and then drafting Trey Sermon (3rd) and Elijah Mitchell (6th). It's a little less crowded today.

Wilson tore his MCL while working out and requires surgery. It's a 4-6 month recovery timetable, which stretches into the regular season, and will probably cost him his roster spot. While Wilson did some nice work in this backfield last year, he actually didn't make the initial 53-man roster, only getting a chance when injuries struck (as they always do). Wilson was going to be in a competition to beat out one of the rookies and/or Gallman anyway; now he'll need to get healthy and hope other injuries create another opportunity for him.

This benefits the other running backs. Mostert and Sermon were definitely making this roster anyway, and now Gallman and Mitchell are more secure in the top 4. San Francisco also has undrafted JaMycal Hasty, but the team never seemed to trust him too much a year ago -- a roster longshot. Still a crowded situation, but less so.

Somebody somewhere will be enthusiastic about this backfield, but optimism looks misplaced. For many years Mike Shanahan's offenses turned all varieties of running backs into fantasy stars, and Kyle Shanahan had his moments. Particularly in Atlanta, where he had the top-ranked PPR running back in 2015 (Devonta Freeman) and a pair of top-25 backs in 2016 (6th-ranked Freeman and 20th-ranked Coleman). But his recent history in San Francisco hasn't been nearly as prosperous for fantasy teams.

He's been with the 49ers four years, and his offenses have yielded exactly one top-25 fantasy back: Carlos Hyde in 2017. Otherwise, it's been far more tease than production. The offense has been unable to keep one guy healthy, and Shanahan himself has been a little fickle, locking in on different lead backs at different times. However you want to label it, he's had a lot of occasional, week or multi-week hits, but no full-season stars.

Here are all the running backs to at some point take a leading role in San Francisco's offense over the last four years. There are 14 of them, so 3.5 per season. One top-25 back, and eight that finished the year ranked between 26-50th at the position. Some fun weeks or three-game stretches in there, to be sure, but nobody you could have actually drafted and been happy about for very long. Maybe 2019 Raheem Mostert and his 10 total touchdowns? That's about it.

Gallman last year was pretty solid filling in for Saquon Barkley. He averaged 4.6 yards per attempt, and was a viable fantasy option for much of the season. Maybe he carves out a role in this backfield.

But recent history suggests there will be some great Mostert weeks, mixed in with strong games from Sermon, Gallman and perhaps Mitchell. It'd be nice to think there will be a great Shanahan running back, and the Wilson injury improves the odds. But I still think I'll be steering clear.