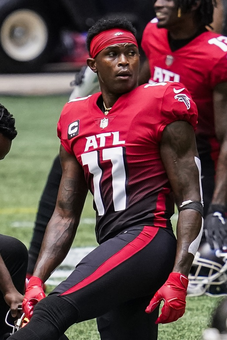 He and A.J. getting downfield

Julio Jones was traded to the Titans yesterday. There's a lot to unpack with this deal: the winners, the losers, both obvious and not so obvious. Anyway you look at it, though, it's a really nice acquisition for the Titans.

Yes, there's what will probably be a late fourth-rounder and earlyish sixth-rounder involved, but the bottom line is Tennessee just landed one of the game's dominant wide receivers from the past decade for basically a late second-round pick. There were reports online that Atlanta didn't take the best offer for Julio but the one that got him out of the NFC. I really hope that's not true, considering Jones is just a wide receiver and there wasn't going to be any Brett Favre coming into Lambeau with a hated rival moment and kicking his old team's ass. It might be that Atlanta just couldn't get more than a 2nd for a 32-year-old wide receiver whose hamstrings betrayed him and cost him nearly half of last season.

But apart from the questionable hamstrings, there's no evidence that Jones' game itself has slipped. His numbers last year, projected over a 16-game season (those were good times), would have worked out to 91 catches for 1,371 yards and 6 touchdowns. A little light on scoring, but it would have been his seventh straight season with over 1,300 yards. If you're going to sit here and claim he's washed up and his body is broken down, there's just one year of evidence of that. On the field, the guy is still dominant.

He's also a nice fit for Tennessee's offense, in part because he's coming from an offense that liked to do the same thing as the Titans a year ago in terms of getting its wideouts downfield. Last year 55 wide receivers caught at least 50 passes, and of those players just 10 of them averaged at least 15 yards per reception. Only two teams had two of those receivers: Atlanta and Tennessee.

Among the big winners: Ryan Tannehill, who was going to be looking at throwing to Josh Reynolds as his No. 2 wideout, and now gets Julio. Calvin Ridley, who's put up big numbers the last two seasons but was especially good when Jones was sidelined; he should be a target monster in Atlanta's passing game. Kyle Pitts is another obvious beneficiary, but I don't agree that it skyrockets him dramatically -- he was already certain to be one of the top 3 targets, and there's still the reality that he's a rookie who for all his talent might need a little seasoning. How much higher can we move Pitts? He was already being drafted in the top 4 or 5 at his position. Russell Gage is now the clear No. 2 wideout, but I'm going to be a little cautious how high I move him. He's still Russell Gage. Check his game logs last year and in the 7 games Julio sat, Gage had three big games and four quiet ones.

The not as obvious beneficiary might be Olamide Zaccheaus. When Jones was knocked out of the Green Bay game early last year, Zaccheaus caught 8 balls for 86 yards. Then when Ridley missed the Denver game, Zaccheaus went over 100 yards and scored. Christian Blake is another in-house option, but less likely (based on previous performances). I think Zaccheaus might merit a very late pick.

Hayden Hurst? Sure, Atlanta might use more sets with two tight ends. But it's not a given, and I don't think this is a dramatic bump for Hurst, who the team has all but officially moved on from. I have him in dynasty. I hope he does enough that some team wants to bring him in as their starter a year from now. Jones being gone helps a little.

Losers: Matt Ryan and Atlanta. No one has been overly crazy about drafting Ryan anyway, knowing this move was coming. Atlanta seems likely to take a step back offensively, and when Ryan drops back to pass he does have one additional difference maker in Pitts, but one fewer with Jones gone. Zaccheaus, Blake, Hurst -- not comparable, even if you roll them all together.

This has to hurt A.J. Brown a little. No longer is he the only superstar wideout for the Titans, so a few catches and yards and (very few) touchdowns will go to Jones that used to go to him. But I don't think anyone should go too crazy moving him down their board. Brown put up strong numbers a year ago with Corey Davis going 65-984-5. If you factor in the possibility of Jones missing a couple of games, he won't necessarily be dramatically better, so A.J. shouldn't necessarily be much worse. The Titans are still a little thin at receiver (both wideout and tight end). I think A.J. is still going to eat.

The inescapable thought for me is that the Falcons re-worked Matt Ryan's contract, tying themselves to him for the next couple of seasons, and added a dynamic weapon in Pitts. And then just gave away one of their other dynamic weapons for what will probably be the 60th pick in next year's draft. And the Titans look a lot stronger in the AFC South, and the AFC itself.