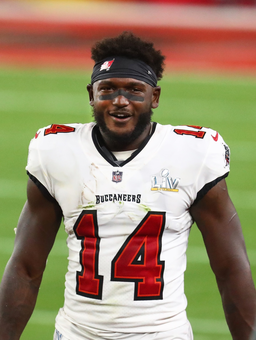 Neither Chris Godwin nor Allen Robinson has agreed to a long-term contract, so both are now locked into playing under the one-year franchise tag. For fantasy purposes, it can be debated whether this is a good or a bad thing.

Under the rules of the CBA, when a player is tagged, he has until July 15 to agree to a long-term deal. After that, it’s not allowed for the player to sign a long-term contract. So for 2021, Godwin will make $15.98 million, while Robinson will make $17.98 million. If the team tags them again in 2022, it will be with a 20 percent bump above those levels.

If you’re a fan of the theory that a player tries harder and is more motivated when he’s in the final year of his contract, this is a good thing. Both Godwin and Robinson (who both played their college ball at Penn State) will be hitting the market again next year.

The other school of thought with these kind of players is that they might be disgruntled or distracted by having to play for less than what they think they’re worth. And with these players likely headed for unrestricted free agency, they could be less willing to play through injuries.

Others have played under the franchise tag, and the results have been mixed. At wide receiver, Wes Welker caught 118 passes in 2012, and Vincent Jackson put up 1,106 yards and 9 TDs back in 2011. None of the other wide receivers who’ve played under the franchise tag, however, have finished with top-40 PPR numbers, including Antonio Bryant (2009), Dwayne Bowe (2012) and A.J. Green (last year).

In a rough sense, most would say that Godwin and Robinson are both better than those three wide receivers who flopped under the tag (A.J. Green has had a better career, but he’s an older receiver now who’s had injury issues). For me, I don’t think Godwin or Robinson should be impacted much by their contract situation.

At tight end, five have played under the franchise tag, and none of them have finished with top-10 numbers.

The best production has come at the quarterback and running back positions. Kirk Cousins (twice) and Drew Brees finished 4th-7th in scoring, and Dak Prescott was having a great season last year until suffering a season-ending injury in his fifth game. Three true starting tailbacks have played under the franchise tag, and they’ve all finished with top-5 numbers: 2005 Shaun Alexander, 2005 Edgerrin James and 2017 LeVeon Bell.

On the chart below (which shows ball-handling players only), franchise contract data pulled off the Spotrac website.