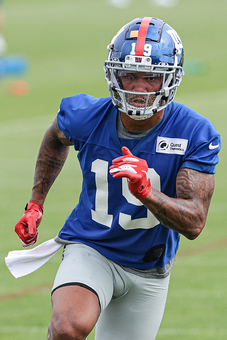 G-Men, Thomas, and others to avoid

ASK THE EXPERTS appears weekly from training camp through the Super Bowl with answers to a new question being posted Thursday morning. How the guest experts responded when we asked them: Who's on your Do Not Draft list?

You can count me out on the New York Football Giants. Their two signature players, Saquon Barkley and Kenny Golladay, are both dealing with injuries. Quarterback Daniel Jones has zero pocket awareness, and toils behind a lousy offensive line (another strike on Barkley). Maybe there's somebody who beats his ADP here, but I can't draft proactively into this roster.

Odell Beckham Jr. has one top-25 finish in the past four seasons and has played 16 games only once during that stretch. He was amazing his first three years in the league and people are still paying up for those highlights. I just don't think a Browns offense that has ranked in the bottom-10 in passing in each of the past two seasons is going to afford Beckham enough opportunities to return to those glory years.

Smith’s work can be seen at FantasyData.com.

The Giants are my team, but the fact that Saquon Barkley (coming off a torn ACL) may not play until Week 3 makes him undraftable at his current ADP (late first or early second round in 12-team leagues).

Two wide receivers were selected with top-6 picks in the 2011 draft — A.J. Green and Julio Jones — and I would be floored if either of them winds up on one of my teams this year. With both, I think they’re declining, injury-risk players who aren’t close to what they’ve been in the past. Green in particular has slipped. I don’t think he’ll be the 2nd-best wide receiver in Arizona (and I’m not sure he’ll even be their 3rd-best guy). If we get to the last round of the draft, with 80 wide receivers picked, I still don’t think I would be selecting him. With Jones, there’s a better chance of some usable projection, but not that aligns with his current price tag. He’s tending to go among the first 15 wide receivers selected; I think it’s about 30 wide receivers in that he should be in the conversation.

I'd have to go with Michael Thomas. Not only is he chronically injured, he's also disgruntled and now dealing with a new quarterback situation that could be shaky at best. His fall from the top of the wide receiver mountain has been swift and impressive; let someone else overdraft him.

Here's three offensive groups I'm considering passing on entirely. Any list of avoidance must include Houston, due to major quarterback issues with Deshaun Watson who's not going to play and Tyrod Taylor who will, plus a plethora of has-been running backs. Similar situation with Denver, really nice receiving talent, but they're likely to underperform as the Broncos are also plagued with a very unsettled quarterback situation, plus a very questionable offensive coordinator. New England has unsettled everything--QB, RB, WR, TE--way too scary for me.

I'm not drafting Saquon Barkley anywhere near his average draft position. Barkley was great, once upon a time, back in 2018. His first-round average draft position suggests people still think he's great. From 2019 forward, he's been plagued by injury, including his current ACL injury that still isn't right. When he's played, he's been mundane, averaging 4.3 yards per carry since his rookie year. He runs behind, arguably, the league's worst offensive line. And his quarterback may never develop the passing game into a threat defenses need to respect. Why would I draft a player with all those issues when I can have Davante Adams or Travis Kelce?

Michael Thomas is someone I would not touch, at least not for where you'd have to draft him. There appears to be a sizable disconnect between Thomas and the Saints organization and the specter of him missing games to start the season because he waited too long to have surgery. The departure of Drew Brees throws the entirety of the Saints offense into a new phase not seen in so many years. I'd also say that I won't be drafting Saquon Barkley as well (though I did once earlier in the summer). I never draft injured players, and more so when they are an initial pick. There are too many questions revolving around his condition and playing availability. Maybe someone else will reap a benefit from him falling. But I've played fantasy football for over 30 years now and those situations rarely work out as well as hoped.

I'm out on pretty much every Dolphin. In the early to middle rounds I keep seeing Myles Gaskin, Jaylen Waddle, Will Fuller and DeVante Parker come up as choices by ADP or site rankings, and I keep letting them pass me by. I don't trust the quarterback when it comes to the pass catchers, and I don't trust the coaching staff when it comes to the backfield. The lone exception is Mike Gesicki, who looks like the only viable tight end -- he should be a popular target for Tua Tagovailoa. Nothing else in this offense looks good to me. at least in terms of being a consistent fantasy option.