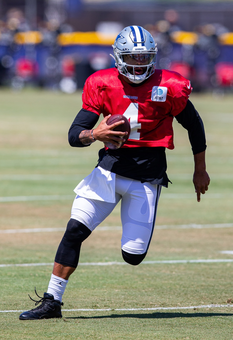 Who will be the Comeback Player of the Year?

Prescott, Mixon and other candidates

ASK THE EXPERTS appears weekly from training camp through the Super Bowl with answers to a new question being posted Thursday morning. How the guest experts responded when we asked them: Who will be the Comeback Player of the Year?

Things are set up for one winner and one winner only: Dak Prescott. He had the hardest 2020, hands down, so he’s already won the narrative-driven vote. And he steers an offense built around his talents and stacked with arguably even bigger talents, from a league-best-or-close-enough receiving trio to a great pair of backs to a line that should regain its collective form right in front of him. There are other nice stories brewing — and I suppose Saquon Barkley could replicate Adrian Peterson’s “Call Me Maybe” season — but as of today the hardware is Dak’s to lose.

The easy answer is Christian McCaffrey, Saquon Barkley or Michael Thomas since all three were Top-10 picks last year and ended up as fantasy team killers. However, both Barkley and Thomas are still nursing injuries from last year and McCaffrey is the universal No. 1 overall pick anyway. I'll take a swing for the fence with Joe Mixon who was Top-12 for two seasons and then missed ten games with a foot injury last year. Mixon was coming off two straight seasons with over 1,400 total yards and at least eight scores in each. The Bengals now possess a passing offense that must be respected and that was upgraded in the NFL draft. Giovani Bernard is gone and Mixon is a clear workhorse and has been described as much by HC Zac Taylor. He's a second-rounder this year, but will bounce back.

There are plenty of good candidates, with Christian McCaffrey, Saquon Barkley and Dak Prescott leading the way. To a lesser degree, Joe Mixon, George Kittle and Austin Ekeler. I’m going to go with Prescott. McCaffrey is the top player on my fantasy board, but the injury he’s coming back isn’t as severe (at times last year, I was wondering if they were just holding him out to improve their draft position while preserving his health). With Prescott, he’s had to undergo multiple ankle surgeries, and I’m thinking he’s going to have a really big year. With the weapons he’s got around him, I’m thinking Prescott has a really good chance of finishing with top 5 quarterbacking numbers.

Sam Darnold gets my early vote for comeback player of the year. He is young, out of New York and Adam Gase's system. Now he has a stud running back in Christian McCaffrey to lean on and some pass catchers in Robby Anderson and DJ Moore. The third overall pick in 2018 has some proving to do and the Panthers are going to let him loose in 2021. He will do enough to turn heads. My honorable mention is new Bears running back Damien Williams who could slip into the start role easily (after sitting out 2020) if and when David Montgomery goes down.

As a Browns homer, Odell Beckham is a player I am shamelessly biased toward in both fantasy and game results. Both he and Jarvis Landry are poised to be pain-free as Cleveland has actual reality-based dreams of an NFL championship. OBJ looks reborn so far in camp; very smooth, effortless, and snagging one-handed grabs over and over. Comeback year prediction of 75 catches, 1,100 yards, 7 TDs. My 2nd choice is my last year's pick, I believe, and that's Indy wideout Parris Campbell. Made a great play last week, and Wentz may be returning in Week 1. Parris has had the "Will Fuller" plague for awhile now as when healthy, he's virtually uncoverable, so if he can just avoid injury in 2021, he could easily leapfrog T.Y. Hilton to be the No. 2 wideout for the Colts.

The obvious answer is Dak Prescott. But if you want to take a long shot, here's an incredibly unpopular answer: Jimmy Garoppolo. He fits almost every criteria needed to win the award. Quarterbacks have won nine of the past 13 awards. Garoppolo is surrounded by high-end offensive talent, George Kittle, Brandon Aiyuk, and Deebo Samuel. He's got the NFL's best offensive mind as his head coach. And Kyle Shanahan remains steadfast that Garoppolo is his starter. Fantasy owners desperately want Trey Lance to start. So do I. But if Garoppolo plays well and the Niners win games, he's a darkhorse to win the NFL's Comeback Player Of The Year. (He's +5000, for those of you in legal betting states.)

I hope it's Dak Prescott, because the NFL is more fun when the Cowboys are relevant (though I have Washington winning the NFC East), and Dallas is overflowing with talented skill talent. And we know how awards go, quarterbacks generally get the most consideration. Put me down for Prescott.

I'm going with George Kittle. Although he's viewed as a top-3 tight end, there's nowhere near as much enthusiasm or confidence as for Kelce and Waller. He missed half of last season due to injury, saddling him with the critique of being injury-prone. But the two previous years, he caught 85-88 passes and went over 1,000 yards both seasons. If you didn't look it up you might think he's missed far more time than just 3 games combined his first three seasons. Tremendous upside if he stays on the field.