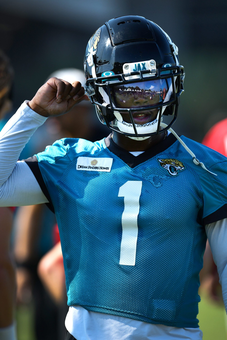 Which rookie are you most excited about?

ASK THE EXPERTS appears weekly from training camp through the Super Bowl with answers to a new question being posted Thursday morning. How the guest experts responded when we asked them: Which incoming rookie are you most looking forward to seeing on the field?

I am most interested in seeing what Travis Etienne looks like, both as a runner and a receiver. Najee Harris won't come cheaply and Javonte Williams keeps rising up the draft board (and maybe too much). Etienne landed in Jacksonville where James Robinson was the big surprise in 2020 and enters the year as the starting RB. The initial plan, far as they let on, is to use Etienne as a third down back / slot receiver to make use of his open field ability. But Etienne was the top running back on many draft boards last April. He was prolific at Clemson. And Robinson doesn't have any advantage of already knowing the offense or having been selected by this set of coaches. Etienne is as talented as any rookie, maybe as any NFL back, and yet is a value as the No. 24 running back in current ADP.

Kyle Shanahan might be the most interesting offensive mind in the current NFL, and the 49ers are loaded with skill talent. Thus, I can't wait to see what Trey Lance has to offer, fully understanding that no one can say with certainty how much he'll play this summer or when the baton will be passed in San Francisco. This year's rookie class has a lot of fascinating summer watches, given that so many players skipped the 2020 college season, or had limited campaigns. JaMarr Chase is another player in that bucket.

I am excited to see Alabama running back Najee Harris make an immediate impact in the Steelers running game this preseason. I believe he has a great chance to be the Offensive Rookie of the Year and a big producer for his fantasy team.

Amon-Ra St. Brown. I’ve got a feeling he’s going to be the best wide receiver in Detroit. He caught a lot of balls at Southern Cal, and they don’t have much else at wide receiver. But this is just guesswork at this point. I would like to see St. Brown on the field, working with the first-unit offense and doing it.

Even despite recently spraining his knee, I’m still excited to see Devonta Smith in action. I expect the Eagles to play him both inside and outside, and he could end up with a mind-boggling amount of catches as a rookie. He’s a steal right now in PPR leagues.

JaMarr Chase joins Cincinnati to reunite with his QB at LSU, Joe Burrow. Their chemistry is undeniable and they are already lighting it up at training camp. The only pressure on the Bengals this season is keeping Burrow upright, and they'll need to be successful at it as he will be throwing often, especially late in games they're trailing in--which should be most of them. No real pressure on Chase either as incumbent receivers Boyd and Higgins are talented, too, and it will be hard for teams to defend them all. Chase should still emerge as their No. 1 option, similar to CeeDee Lamb's situation in Dallas.

I’m excited to see Trey Lance so we can better evaluate what his timetable looks like. If he plays well enough, can he be a Week 1 starter, despite everything Kyle Shanahan has insisted? Or is he so raw we could be looking months later or even 2022?

Easy choice, I know, but I'm looking forward to seeing Trevor Lawrence. He'd been the expected No. 1 overall draft pick for years, he's pairing up with a famous college coach making his NFL debut, and it's just going to be interesting seeing him go from being the best player on the field in college to being knocked down a peg or two. Peyton Manning and Andrew Luck were top-10 fantasy quarterbacks as rookies, but no one is drafting Lawrence right now with those kind of expectations. Maybe he'll surprise, and maybe we'll get some hint of it in the preseason games.