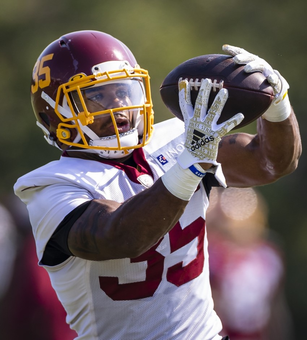 Now is the time to be picking over the waiver wire in dynasty leagues, seeing if there are nobodies who could become somebodies this year or next. Ian wrote about New Orleans' Tony Jones yesterday. Here are 10 others, ordered QB-RB-WR-TE. (Note: If you're in a redraft league and strictly concerned with bigger-name guys, I understand if you move along.)

1. Sam Ehlinger, Colts. Indications are that Carson Wentz (foot) will be good to go for Week 1. The backup will be either last year's fourth-rounder Jacob Eason or this year's sixth-rounder Ehlinger. I've watched both Indianapolis preseason games (you're welcome), and I think Ehlinger makes more sense as a backup, because Eason is not good. And Ehlinger is a willing runner, giving him some fantasy appeal if he needs to make a start (Eason's mobility is somewhere on the scale between Old Philip Rivers and Retired Phillip Rivers).

2. Jaret Patterson, Washington. Patterson (pictured) is probably already owned in most dynasty leagues, but I'd be remiss not to mention him here just in case. He showed well with reserves in Washington's first exhibition, then played some with the first team in the second game, coming in right after Antonio Gibson. Probably the backup running back and not much of a role if players stay healthy, but I think he would have a role if either Gibson or 3rd-down back J.D. McKissic misses time.

3. Xavier Jones, Rams. If Darrell Henderson misses time (or when he needs a breather; they don't want to overwork him) either Jake Funk or Xavier Jones will come in, unless the team signs someone. Funk seems a little more likely to get most of the carries, but to me he looks like a backup running back -- unlikely to get a heavy workload or be particularly effective if he does. Jones is a better receiver, and I think he makes more sense as a contributor to the Rams offense, particularly in PPR leagues. Given a choice of one of these guys to pick up, I'd opt for Jones.

4. J.J. Taylor, Patriots. A year ago at this time, just before the season, I had an open roster spot to add a nobody running back. I was choosing between two backs who had done some noteworthy things in the exhibitions, Taylor and Myles Gaskin. I chose Taylor. A few weeks later, I released him and watched Gaskin go on to have a pretty decent season. Mistakes happen. Now I'm considering adding Taylor again; he's looked really good in the exhibitions. He'll probably make New England's roster, but will be stuck behind James White. This year. If I add him, it's for him being that White-type back in 2022.

5. DeeJay Dallas, Seahawks. As alluded to in the latest update, the Seahawks are still trying to make Rashaad Penny happen. Somewhere along the line, maybe he'll do something that explains why they used a first-round pick on him in the first place. I gave up on him a couple of years ago. Dallas seems just as likely to amount to something when Chris Carson breaks down.

6. Mason Kinsey, Titans. Kinsey is a nice example of a guy who tears it up in the preseason, some of us get excited about him, and he disappears completely once the real games start. Critics of exhibition game performances all get to say I told you so. So be it. Tennessee has two proven wideouts in A.J. Brown and Julio Jones, and Jones is currently hurt. There are worse fliers than Kinsey.

7. Quez Watkins, Eagles. It's probably too late for Watkins in many dynasty leagues. If not, worth adding. Yes the Eagles have a pair of first-round picks in DeVonta Smith and Jalen Reagor. But Watkins might have a better idea of what he's doing right now, and should figure into their top 3 at the position.

8. Juwan Johnson, Saints. Adam Trautman has been a popular sleeper in some circles, seemingly in line to take over as the Saints' starting tight end this year. But Johnson is the one who's been drawing more preseason buzz, and looks like he could emerge as a factor here. Saints play tonight; let's see how those two tight ends are used.

9. Noah Gray, Kansas City. Nobody is taking many targets away from Travis Kelce, certainly not among backup tight ends like Gray and Blake Bell. But Kelce is 32 years old and can't go on forever. Two to three years from now Patrick Mahomes will still be in his prime and somebody else will be this team's No. 1 tight end. Patience is required, but Gray is worth a dice roll right now.

10. Kylen Granson, Colts. The Colts love throwing to their tight ends, and fourth-rounder Granson is more receiver than blocker. Jack Doyle is getting up there in years and it's time to pull the plug on Mo Alie-Cox, who's had ample opportunity to make an impact. Unfortunately with Granson, he hasn't actually impressed with his chances in the preseason games. He had three balls thrown his way against the Vikings on Saturday and all three hit him in the hands and fell incomplete (one was a drop, the other two were behind him -- could have been caught, but the quarterback didn't cover himself in glory there either). I'm hoping Granson does something positive in the final exhibition, but acknowledge he hasn't done so yet.