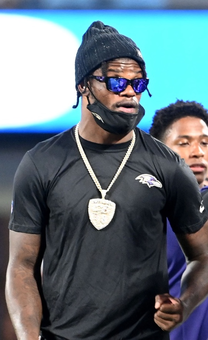 Dalvin Cook (and his backup) appear to be unvaccinated

If a player is unvaccinated, it reduces his value for fantasy purposes. Not by much, but such players are more likely to be sidelined at some point for a violation of the league’s COVID protocols. It makes sense, therefore, to slot unvaccinated players behind comparable players who come without that additional risk.

The league has set up its rules to encourage players to get vaccinated. Most notably, unvaccinated players must be tested every day and are sidelined for five days if they come within close contact of a person who tested positive. And those players are required to wear masks of they’re not active players at practice or in games.

Players who are fully vaccinated get tested only once every two weeks, with no mask requirements, and they are not sidelined for five days if they happened to get near a COVID-positive person.

If a player tests positive, he can return after two negative tests that are 24 hours apart if he’s vaccinated. If he’s unvaccinated, he must sit out 10 days in addition to passing the two tests.

The NFL has put together an 88-page manual outlining all of its COVID protocols. It’s long, and it’s written in a legalese style, but it’s there, you should want to look in more detail at specific scenarios. Big picture: if a player isn’t vaccinated, it’s a lot more likely he’ll need to miss some time at some point.

For our purposes, we’re most interested in the skill-position players who’ll be drafted in fantasy leagues. So we’re taking note of those guys when see them in news stories or releases by the team. Some players have made comments about their vaccination status. Others have been seen wearing masks at practices and games (not proof that a player is unvaccinated, but evidence that he’s probably in that group. And when a player spends five days on the Reserve/COVID-19 list, it’s almost always because of contacting with a positive person (vaccinated players don’t get placed on the list for contacting reasons, but unvaccinated players do).

Neither the league nor individual teams have released an official list showing which players are vaccinated. There no doubt are some (perhaps many) players who are unvaccinated that we’re not aware of. And similarly, players who were unvaccinated in July could potentially be vaccinated now. But below is our team-by-team list of the notable COVID-risk players.

ARIZONA:
James Conner spent five days on the Reserve/COVID-19 list in mid-August (he likely was not vaccinated at that time).
DeAndre Hopkins tweeted in July that he didn’t like the NFL’s COVID rules, but he didn’t say in that tweet (which was quickly deleted) whether he was vaccinated. When he was watching the first preseason game from the sideline, Hopkins (and teammate A.J. Green) weren’t wearing masks, which is an indication that they have been vaccinated.

ATLANTA:
The Falcons in mid-August said they were the first team to get their entire roster 100 percent vaccinated.

BUFFALO:
Cole Beasley has been the most vocal critic of COVID protocols, indicating he won’t be getting vaccinated. He was placed on the Reserve/COVID-19 list on Aug. 24 for close contacting (he’ll likely be activated about Aug. 28).
Josh Allen in June said he wasn’t vaccinated but would look into it (as with Lamar Jackson, doesn’t seem like it will be happening anytime soon). Allen and Beasley were standing together on the sidelines of the Bills-Bears game in mid-August, not wearing masks. That, however, doesn’t necessarily mean they’re vaccinated. Other unvaccinated players have worn masks on the sideline during games (including Cam Newton and Kirk Cousins) but the Bills might be interpreting the guidelines differently. On page 50 of the mega-document, it reads: “Any such individual with Bench Area Access who is not fully vaccinated, except for Active Players, shall be required to wear masks at all times; unvaccinated Inactive Players (e.g., Practice Squad or IR) who are on the sideline must also wear masks.” Allen and Beasley were in uniform (even wearing shoulder pads) so they could reasonably argue that they were “active” players, even though it was clear they were never going to play. And this might be what the league intended when it wrote the rule. The protocols call for a fine of $14,650 for a first-time offense of the mask rule, but there’s been no announcement of any fines so far.
Gabriel Davis was placed on the Reserve/COVID-19 list on Aug. 24 for a close contact. This is an indication that he’s not vaccinated. Davis did not test positive and likely will be activated about Aug. 28.

CHICAGO:
Jimmy Graham in July said he was vaccinated but that he didn’t want to be – that he felt bullied into getting the vaccine because of the league’s protocols.
Allen Robinson in June said he was undecided if he would get the vaccine, that he was still researching the issue.

CINCINNATI:
Joe Mixon in mid-June tweeted that he didn’t like that the NFLPA had agreed to the league’s COVID protocols, but Mixon didn’t say whether or not he was vaccinated.

DALLAS:
CeeDee Lamb was placed on the Reserve/COVID-19 list on Aug. 23. If Lamb tested positive, he will be sidelined until early September. If it’s for a high-risk close contract, Lamb will return in five days if he passes the necessary tests.
Ezekiel Elliott in July said he’s vaccinated. He contracted COVID-19 last summer.

INDIANAPOLIS:
Carson Wentz was wearing a mask at practice in mid-August. That likely means he wasn’t vaccinated at that time.

LAS VEGAS:
Daniel Carlson spent over two weeks on the Reserve/COVID-19 list, getting activated on Aug. 17. That likely means he tested positive and needed more than 10 days to successfully complete the necessary tests.
Jalen Richard spent five days on the Reserve/COVID-19 list, getting activated in early August (he likely was not vaccinated at that time).

LA RAMS:
Tutu Atwell spent 10 days on the Reserve/COVID-19 list before being activated in early August. He likely tested positive.

MIAMI:
Mike Gesicki spent 10 days on the Reserve/COVID-19 list in early August (an indication he tested positive). Two of Miami’s other tight ends, Cethan Carter and Adam Shaheen went on the list at the same time as Gesicki but came off after five days, indicating they were shelved by contacting rules (and thus, weren’t vaccinated at that time). Wide receiver Preston Williams also spent five days on the list at about the same time (he likely was part of that group).

MINNESOTA:
Kirk Cousins says he’s not vaccinated and has indicated he won’t be getting vaccinated. Cousins spent five days on the Reserve/COVID-19 list in early August through contacting protocols.
Adam Thielen in June said he was not vaccinated. In each of the first two preseason games, he’s been spotted on the sideline wearing a mask (indicating he’s still not vaccinated).
Dalvin Cook was wearing a mask while he was on the sidelines during the Colts game. So was his backup Alexander Mattison. This likely means that these guys also aren’t vaccinated. Mattison is notable, because should Cook be ruled out by COVID rules at some point – with either a positive test or as a close contact – Mattison very likely will be shelved as well (since those two are in the same meeting room).
Justin Jefferson was standing on the sideline of the Colts game, surrounded by teammates wearing masks. Jefferson wasn’t playing in this game and wasn’t wearing a mask, which we’ll take as evidence he’s vaccinated.
Kellen Mond spent 10 days on the Reserve/COVID-19 list in early August after testing positive.

NEW ENGLAND:
Cam Newton was placed on the Reserve/COVID-19 list on Aug. 23 after missing a daily test (meaning he’s not vaccinated). Newton will be eligible to return later in the week if he completes the necessary tests.
Mac Jones has declined to say whether he’s vaccinated, but he hasn’t been seen wearing a mask (making it seem that he is vaccinated but is perhaps refusing to answer as a way of supporting his fellow quarterback).

NY GIANTS:
Kadarius Toney tested positive in July, spending time on the Reserve/COVID-19 list in July (he likely was not vaccinated at that time).

PITTSBURGH:
Najee Harris early in camp declined to answer whether he was vaccinated.

SAN FRANCISCO:
Jauan Jennings spent time on the Reserve/COVID-19 list before being activated in early August (he likely was not vaccinated at that time). Jennings is an obscure player but in mid-August was considered the favorite to be the team’s fifth wide receiver.

TENNESSEE:
Coach Mike Vrabel tested positive on Aug. 22. He’ll be eligible to return after passing two tests 24 hours apart.
Ryan Tannehill says he got vaccinated because of the inconvenience created by the league’s COVID protocols.

WASHINGTON:
Curtis Samuel spent time on the Reserve/COVID-19 list before being activated in early August (he likely was not vaccinated at that time).