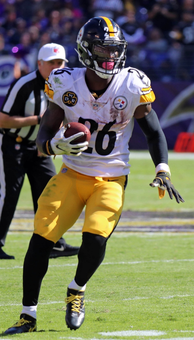 Ian Allan answers your fantasy football questions. In this edition. What (if anything) will LeVeon Bell do with the Ravens? Is Marquez Callaway for real? Writing off veteran players too early. Ranking the backup quarterbacks. And more.

With LeVeon Bell signing with Baltimore, what is his value and how does it change Edwards value?

He’s sort of half signed. He’s on Baltimore’s practice squad, rather than the 53-man roster. I suppose the plan is to bring him in, watch him practice, and see how he fits in. He was one of the best backs in the league a few years back, and he’s only 29. So maybe. But Bell was mediocre at best in Kansas City last year, with Darrel Williams beating him out late in the year. And I fear that Bell doesn’t quite fit that offense. He’s a superb receiver, but they don’t really throw to their backs. And Bell is arguably the league’s most patient runner, carefully waiting for holes to develop. That might not mesh at all with the option stuff that the Ravens use. I’m slotting him as their third back for now. Gus Edwards is definitely No. 1, and I was impressed by how Ty’Son Williams ran in the preseason. If I were walking into a draft today, I would select Williams a little earlier than Bell. I will be interesting to see how Williams runs against Las Vegas on Monday night.

I think Marquez Callaway might be a top-10 receiver for the first six weeks of the season. I think they’re going to go to him a ton. He gets my attention. Jakobi Meyers looks like the best receiver in New England. He’s also a guy where I would be mulling how many chips I want to put on the table. I will pass on Quintez Cephus at any price. The three tight ends, with it being tight end premium, merit some consideration, but not guys I’d be breaking the bank for.

What are your thought on how folks write off older players *before* they even have a bad season? This year I got Melvin Gordon very late. I am aware he has a young RB breathing down his neck, but the youngster seems likely to replace Lindsey and while talented, will make rookie errors. MG had like 10 TDs and 1100 yds, 4.6 YPC. Why the rush to write him off? Kind of feel this way about Julio too, understanding he is on a new team but he is Julio.

Agreed. There are similar situations in Denver and Detroit. In both cases, it seems to that the younger backs (Javonte Williams, D’Andre Swift) are overrated, while there’s seemingly very little interested in the veterans (Gordon, Jamaal Williams) who might be just as good.

I'm spending too much time worrying about backing up Travis Kelce, but would you please drill down a bit on the two-headed monster in New England, Anthony Firkser with the Titans and now Tyler Kroft's situation with the Jets in light of the Herndon trade and the speculation surrounding Zach Ertz.

Always good to hear from you, old friend. Kroft, Firkser, Jonnu Smith, Hunter Henry. They all look like prospect-type guys to me. I don’t see a ton of separation between them. Right now, each of those guys looks like a second tight end in a typical 12-team league. They all have some chance to develop into something a little better, but there’s also the downside potential that a few weeks from now, it will seem pretty clear that they’re not going to be top-20 tight ends this year. I don’t consider Ertz to up there in this group right now. Nor is Chris Herndon (but I’ll be interested to see how things transpire with him and Tyler Conklin in Minnesota).

Would you please put together a list of your best guess NON-vax players. Watching pre-season games and masks on and off, also players coming off or going on for positive covid tests

I’ve got a COVID player list I’ve been updating. It’s been posted three times, most recently on August 30. I’ve will update it further, posting it again before the end of the weekend.

I like Matthew Stafford and his receivers. My apprehension is picking his receivers looking at the backup QBs for the Rams. Not to be a Debbie Downer, but in the event of a Stafford injury, what does that do to the value of those receivers? Is my concern justified? Curious George

Upon reading the September 2 update I was surprised to find that Mac Jones received nearly no upgrade in the rankings despite his being named as starter behind a great offensive line and facing no competition. This after the August 30 update was written with the presumption of Cam as starter. I understand that any enthusiasm you may have for Jones is likely tempered by his expected dearth of rushing yards; still, you prefer Wentz? Watson?

In my opinion, it’s been clear for a long time that Jones was going to be doing the vast majority of the quarterbacking in New England. That was apparent from when Jones played really well in the first preseason game. It was some weeks ago that I re-worked the projections for that team, operating under the assumption that Jones was going to be their quarterback (with Newton perhaps holding down the for few weeks). But it hadn’t been officially announced, and Bill Belichick was tossing around a few smokescreens, saying things like Newton will be the starter until he’s not the starter and whatnot. That muddied the waters, with uncertainty whether Jones would be taking over in the middle of September or perhaps having to wait into October if Newton was playing well. But when the decision was announced, we already had Jones pretty much in place, I think. I think he could be a decent quarterback, running their offense effectively, but I don’t think he’ll be a big numbers guy as a rookie. As you point out, he’s not a runner, and I think he’ll be more of a game manager as a passer. I think they’re going to run the ball a ton. So for fantasy purposes, I would take Carson Wentz before Jones. If you need somebody who’ll play, I would take Jones before Watson. I’ve got Watson rated in the 20s to cover the possibility (outside possibility, perhaps) that Watson gets on the field in the second half of the season.

Can you tell me why Tim Patrick (WR) Denver Broncos is not listed on your cheat sheets?

Nice player, but they have three other wide receivers I think they like a lot more – Jeudy, Sutton and KJ Hamler.

I am in a 4man keeper league. It also rewards 6 points per pass TD. Only having Kamara there I am looking for another keeper RB. Having the 7th pick it's doubtful I will get Najee Harris or Josh Jacobs (left available). My first choice is Javonte Williams - he looks like the best rookie RB to me. But if he is not available, which is likely as well, I am looking at Damien Harris. I really liked the way he ran last year, garnering 5.0 ypc. But you have him listed as the 26th RB on the dynasty cheat sheet, behind guys like D. Swift, Miles Sanders, Hunt and Gaskin. Is he so low because of coach Billitrix? Or because or how well his backups: Stevenson and Taylor played?

I like Damien Harris. Would be a nice choice to have playing on Sunday. But he's not much of a factor at all as a pass catcher. That's a big factor in PPR rankings (and those dynasty rankings are of the PPR variety). And I'm not sure how much better Harris is than the guy who's backing him up (Rhamondre Stevenson).

I typically put together an overall and go off that for the first few picks. If there’s uncertainty about the early rounds, you can measure a few of the player combos. That is, decide what you think each player is statistically worth – put a number on him. Then you can measure the size of the production by comparing various player combos. You add up the stat totals of a RB in the first and the WR you think you would get in the second, comparing it to what you would get if you selected a WR in the first and the RB you think you would get in the second.

Ian, thanks for the great stuff once again! 12 team league with 14 player roster., 1pt ppr. There are several good receivers available after our auction. I have room for 1 more. Parker, M Brown, Cooks, Reagor, Mooney, Sheppard, Crowder, Waddle are available to name a few. I’m leaning toward Reagor. Who do you like for high ceiling and why? Thanks

Definitely lots of nice options. I like Cooks the best – definitely the No. 1 option in Houston, and I would be looking to use him in Week 1 against Jacksonville.

I play in a dynasty league and have Cam Akers. Akers was placed on the reserve/non-football injury list instead of the IR. While the result is the same for the Rams, it's not the same for me for fantasy purposes. I can only put players on the IR who have the NFL IR designation. It's not something a commissioner can edit since it's hard coded in the site software we use. So not only do I have the disappointment of starting the season with one of my best players out with a season ending injury, he's using up a bench roster spot for the entire season. My question is why would a team put a player on the reserve/non-football injury list versus the IR, and any advice to fantasy gamers facing this situation.

That’s weird. For the non-football injury list, it applies to injuries that didn’t occur in football games or practices. If a player injuries his knee skiing or shooting basketball with friends, that’s a non-football injury. If it happens in a regular team practice or game, then traditional IR. In this case, Akers injured his Achilles while working out, preparing for the season. To me, that seems like a football injury, but I guess by the letter of the law, it is not. To me, if your league is allowing such players to be stashed on IR, Akers should be eligible for that list.