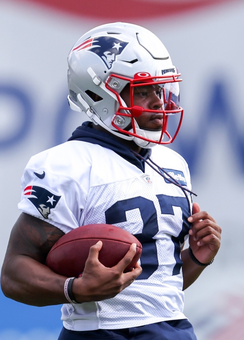 Ian Allan answers your fantasy football questions. Special Saturday edition. Is Damien Harris the most underrated running back this year. Are quarterbacks increasing in value? Players returning kicks. And more.

You’re a lot higher on Damien Harris in non-PPR formats than other “experts.” Based on past experience heeding your advice (4 straight titles), I’m inclined to trust your judgment. Everything seems to have broken Harris’ way — Michel going to the Rams should give him more carries, and Cam’s release leaves lots of rushing TDs in play. What are all the other guys missing?

Harris won’t catch many passes. He caught only 5 passes in the 10 games he started last year. That’s probably a contributing factor. (I don’t think he’ll give you much in the receiving department.) He also didn’t score many touchdowns last year – just 2 in those 10 games. The lack of scoring was powered by Cam Newton running in 12 TDs on his own. Newton’s gone, so I’m expecting (and by “expecting” I mean “I’m certain”) the running backs will be punching in those 1- and 2-yard touchdowns this year. (I would guess that this is the facet too many others aren’t properly calculating.) New England has a good team. It might score 20 rushing touchdowns. When Harris is starting, he should punch out plenty of games with 70-80 rushing yards and a touchdown. Those who select him should prioritize landing Rhamondre Stevenson, whose production should be similar if he winds up in the starting role at some point.

I am a long time subscriber, and I play in a league that uses traditional, non-PPR scoring. I have noticed something strikingly different this year as compared to previous years' Cheat Sheets. In past seasons, there might have been one or two stand-out QBs in the Overall Top 35 on the sheet (usually those that also score rushing TDs), but this year, there are no fewer than NINE QBs ranked in the top 35 overall. To me, this is radically different than past years, and it resulted in me drafting Tom Brady (ranked #21 overall on the 9/2 Cheat Sheet) in the middle of the fourth round. Why so many QBs ranked so high this year? What has changed? I'm usually a 6th round or later value QB guy, so this year's draft has me super uneasy!

In my opinion, the top quarterbacks have value. Patrick Mahomes and Josh Allen are awesome, I think we can all agree. But then there’s another tier of quarterbacks that are really studly. Guys like Brady, Lamar Jackson, Kyler Murray, Dak Prescott and Justin Herbert. When you look at what those guys will do in comparison with the quarterbacks outside the top 10, there’s a statistic gap. So when we get into the third round of a 12-team draft, with the running backs and wide receivers starting to look pretty similar to what will be selected in the fourth, fifth and sixth rounds, I think the correct move is to select one of those really good quarterbacks. We saw this in the Thursday night game (with Brady and Prescott). Those are high-octane offenses, and Brady and Prescott are the triggermen – they’re always going to be involved in all that great production that occurs. Only dimension here is to balance this line of thinking with the behavior of the other 11 owners in your league. Best course, I suppose, is to figure out when the last of those top 9 quarterbacks is going to be selected, and move shortly before that point. Seems like you hit it pretty well with Brady in the fourth. I don’t think that the Thursday night game was some kind of outlier – there will be plenty more games like that.

I play in a 10-team auction keeper league in which we keep 5 players and in order to retain we have to pay what we paid the year prior. I am thinking about picking up Akers or Dobbins who went undrafted and stashing them as $1 players. Which would you target with the first waiver priority?

Dobbins. It’s a lot more straight forward coming back from a torn ACL. The Ravens right now can operate under the assumption that Dobbins will be back for camp in 2022, and he’ll be pretty much what we was supposed to be this year. With Akers, the Rams will have to take more of a wait-and-see attitude, so they’ll to come to camp with another big-time option.

Just wondering what your thoughts are for Matthew Stafford this year? I grabbed him at the end of the 7th round last night (top QB's started flying of the board in the 7th). I think he will have a big year with a good OL and all those weapons. Curious if you concur? Derek Carr was the last pick of the night. Did someone get a steal there?

I like him. In general, there’s the two all-World guys (Mahomes and Allen), then another seven who I really like. Stafford is the best quarterback, I think, after those first nine. I don’t know why people don’t like Carr more. I’ve been involved in a couple of drafts where he seemed to be the best value at the position. Should be going in the mid-teens, in my opinion.

Hey Ian, seems like leagues keep adding scoring categories year after year. 3 of my leagues award individual points for punt/kickoff return yards &amp; TDs. Any thoughts of adding these to the projections? Makes players like Hardman &amp; Mooney much more valuable &amp; into consideration for starting roles. thanks for all you do!

As part of the regular routine, I maintain a stat projections file. You get access to it as part of your subscription (in a Microsoft Excel format). In there, there’s a column that’s pink (one of way too many colors that I use). It shows the expected number of touchdowns on kickoff and punt returns that I expect the player to accrue. In the most recent file, I see eight players who are notable or somewhat notable field players who also have a chance to return some kicks: CeeDee Lamb, DJ Moore, Mecole Hardman, Jaylen Waddle, Nyheim Hines, Jalen Reagor, Tony Pollard and Quez Watkins. For your purposes, probably best for you to add on their extra kick yardage return estimates by hand.