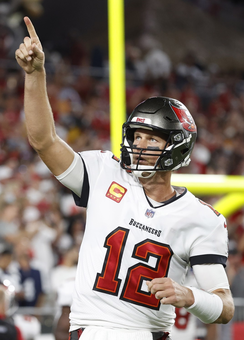 Bucs outslug 'Boys in a barn-burner

Now THAT is the way to kick off an NFL season. It was pretty clear from the git-go that defense wasn't going to be a staple of this game. It's a reminder that while the Bucs have an elite fantasy defense and Tampa Bay just won a Super Bowl, this was still a bottom-10 pass defense, that lost a key defensive back early on. There will be offense on both sides in their games. Let's get to it.

Longtime readers and especially Patriots fans may recall that there have, at times, been moments when I did not fully concede the all-world wondrousness of Tom Brady. Obviously he's an all-time great and inarguably he's the most accomplished quarterback in NFL history -- and that there will ever be, nobody is going to touch his championship resume. I just have qualified it by saying he's been extremely fortunate to have the same Hall of Fame coach and decision-maker, and owner, around him for 20 years (until last year, obviously). And that's true.

But Brady has won me over, not that he gives a crap. What he's doing at age 44, with a second team (also working with a great coach and some Hall of Fame talent around him), deserves all the applause in the world. It's mind-blowing. We all recall Brett Favre, Peyton Manning and other great quarterbacks in their final season, some 3-5 years younger than Brady, looking like they'd trip over their own feet or their arms would fall off. What he did with Tampa last year, and is doing now (yes the Dallas defense will get lit up by a lot of other quarterbacks, but still) is incredible. Some of the throws he made routinely last night, over the middle to Gronk past a defender's fingertips, deep balls to Godwin and Brown; it staggers the imagination. His 2 interceptions were a Hail Mary (60 yards in the air and not far off from being completed) and an easy screen that Fournette somehow let clank off both his hands. Hats off to Brady. Feeling good about him being our No. 3 QB virtually all offseason, and available later than that in drafts.

Dak Prescott is as much of the story from last night, considering he's coming off a couple of injuries and facing a defense supremely more talented, particularly in terms of pass rush. He missed a couple of throws and held the ball too long a few times; there were a couple of alarming sideline plays. But he threw the ball really well and did his part for the team to get a win. Had his kicker not clanked an extra point and had one of the worst yanks of a short field goal in memory, we'd perhaps be talking about the 1-0 Cowboys. Dak's not going to run as much this year, it appears, or maybe that was a tough front-seven specific thing. But throwing it he looks like the guy he was pre-injury a year ago, and that's a very good thing. Sure wish I'd submitted my Fantasy Index Blackout lineup last night, I'd probably have used some Bucs and Cowboys. Oh well, there will be other high-scoring games on Sunday.

People will note the involvement of Tony Pollard as reason to be concerned about Ezekiel Elliott. Plus Elliott got stoned at the line of scrimmage all night long. Don't Panic. The Bucs have had the league's best run defense two years running, anyone who told you Elliott would have a big Week 1 was kidding themselves. Matchups matter. Pollard had a bigger passing game role and that's acceptable, but Elliott still played 83 percent of the snaps, compared to 24 percent for Pollard (shared backfield at times, including Elliott converting a short-yardage situation from the fullback spot). If you've got a scared league-mate looking to shop Elliott for someone drafted half a round or a round later, that's worth considering.

Leonard Fournette and Ronald Jones were alternating series early on, which wasn't a surprise. Then Jones lost a soft fumble and was benched. Just as those with Fournette were celebrating that development, he let an easy screen pass bounce off his hands for an interception. But you can't bench everyone, so Fournette stuck around to play two-thirds of the snaps, with Giovani Bernard having a minimal role. Jones...doesn't have the credibility built up to be losing fumbles. Fournette caught 5 of the 7 balls thrown his way. Short version: still like Fournette, still dislike Jones. Bad plays without ever turning in really good plays is a recipe for a seat on the bench on a team this talented.

Someone recently noted the dearth of cornerback talent in the NFL these days; that some otherwise good or at least credible defenses will be hurt in this regard. Part of is the way the NFL has legislated playing in recent years, favoring quarterbacks and receivers, but it's an issue, even for secondaries better than these two. Tampa Bay losing Murphy-Bunting in the first quarter just made things worse. Thinking about this last night, I wondered if this would be the year of the No. 3 receiver. Logically, if cornerback play is down league-wide, the greatest beneficiaries might not be the No. 1 wideouts, but the No. 3s, who will be facing backup-caliber (at best) corners.

So when Antonio Brown and Michael Gallup were making big first-half impacts, I was thinking about this. Gallup saw 7 targets, catching 4, plus another just out-of-bounds in the end zone; he was open, pass just led him a little wide. Then he left with an ankle injury, unfortunate, probably a sprain of some kind. With Brown, who really has to be on a lot of Index teams, it never made any sense how in preseason drafts Mike Evans and Chris Godwin were being drafted several rounds earlier than Brown. It's a three-wide receiver offense. Brown is a H0F talent who's buddy-buddy with Brady. He was nearly as good the second half of last season and should have been drafted comparably. Great having him on several teams (you know, until he gets suspended for getting in a fight with a dog-walker or something).

Evans saw Dallas' best corner and Godwin's big game could have been even bigger had he not lost a goal-line fumble and failed to catch a potential long touchdown. They're going to have weeks in better matchups than Brown and with better games. But clearly, you're happy if you have Godwin or Brown, and I think you'll be fine with Evans, too.

Maybe Amari Cooper took the fact that CeeDee Lamb was drafted first in most leagues personally? Probably not, but he's not ready to cede the No. 1 role. Lamb had a couple of early drops that had those with him on their team concerned, but rallied with a big game, including just one fewer target than Cooper. Will have big years, both of them. The No. 3 if Gallup misses time is Cedrick Wilson, and he caught all 3 passes thrown his way. Should be rostered.

Nobody wants to hear about my FanDuel team, but what the hell. I am a sucker for those single-game contests, and last night my team was in 1st place out of 39,000 in a $3 entry deep into the 3rd quarter. I had Brady in the MVP spot (1.5 times his points) and Prescott, Cooper, Brown and Rob Gronkowski as my five players. I was making vacation plans. Ended up being the right five players, but the ultimate winner had Cooper in the MVP. I was 56th, which will be a nice lunch some day soon. Anywho, the key "cheaper" selection was Gronk, who I felt sure would be a great candidate for a Gronk spike or two. And it was two, as he caught all 8 balls thrown his way. Cameron Brate wasn't targeted. O.J. Howard, coming off the Achilles injury, played 6 snaps. Gronk looks kind of like the Gronk of old/young out there.

Dalton Schultz was the story at tight end for Dallas, playing two-thirds of the snaps and catching all 6 passes thrown his way. But Blake Jarwin also started, also played almost 60 percent of the snaps, and caught 3 of 4 thrown his way. Schultz will be a popular TE-premium add, but Jarwin isn't necessarily the No. 2 here. There will be games he has better weeks.

Ryan Succop was perfect on the night, nailing the game-winner. Greg Zuerlein looked like he was going to lose his job after comically pulling a 31-yarder and missing an extra point, but rallied to make the rest of his sensible kicks (short on a 60-yarder, no shame there except in the decision-making by Mike McCarthy, since he nearly let the Bucs score in the waning seconds of the half).

Do we need to move the Cowboys Defense up the rankings? Maybe a tiny bit. But their 4 takeaways were mostly giveaways, and they let Brady attempt 50 passes without getting any sacks, which has to be approaching an NFL record. The Buccaneers Defense had just 1 sack and 1 takeaway, but they were close to several more. We'll see what the injury status is of Murphy-Bunting, but I think they'll remain our top defense. Matchups get better for most of the next six weeks.