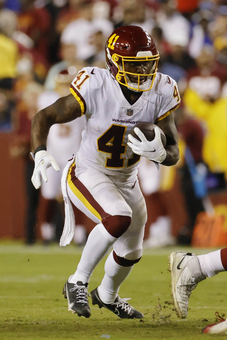 Are pass-catching backs better in losses?

Washington plays at Buffalo this week. Is this a good matchup for J.D. McKissic? On the one hand, this looks like a probable loss, with Buffalo looking like one of the AFC’s best teams. But at the same time, Washington could be trailing more often, resulting in more dumpoff passes, and McKissic fills that role in the offense.

That’s a question that’s long interested me. Is it better to start third-down backs in losses? There tends to be more scoring and production in wins, but losses tend to result in more of those cheap passing stats, helping out McKissic types.

I’ve spent the last hour pushing around some numbers on this. On this one, I took all third-down backs who’ve caught at least 60 passes in a season in the last three years. And I’m looking only at third-down backs here, leaving out featured backs (McCaffrey, Kamara, Elliott) who also happen to be pass catchers – I’m looking at McKissic-type players.

Then we can look at how those players performed in games from those seasons.

There are 173 such games, and these players (on average) were a point better in losses (using PPR scoring). In those 82 losses, they averaged 19 rushing yards and 5.3 catches for 41 receiving yards, with 20 TDs (in 82 games is about a touchdown every four weeks).

There were 91 wins, and the third-down backs in those games averaged 22 rushing yards and 3.8 catches for 33 yards, with 37 touchdowns in 91 games. That’s a big increase in touchdowns, but with a decrease in catches of a one and a half per game.

With these backs, there were 43 times a player caught at least 7 passes, and 30 of those came in losses (which I’ve got tagged with black dots). Only 13 came in games that teams won.

McKissic caught at least 7 passes six times last year. All but one of those games came in games Washington lost.

Similarly, there were 44 games where these backs caught only 0-2 passes. (And with this study, the player must have played at least some for the performance to be considered.) In the low-receiving production games, 29 of them came in games the teams won, versus only 15 losses – so it’s again about a 2-1 ratio, but flipped the other way.

McKissic caught 0-2 passes five times last year; all but one of those games came when Washington won.

In my opinion, it’s accurate to conclude a back like J.D. McKissic should be more involved as a pass catcher in games where his team is behind and forced to move away from the run.

Of course, we can’t go into any week being certain a team will lose. Maybe Washington goes into Buffalo and pulls off a surprising upset, with Antonio Gibson running more effectively than I’ve expecting (and McKissic, then, not playing all that much).

Additionally, for fantasy purposes, we’re not looking for receiving production, we’re looking for OVERALL production – PPR points. If we pull out the top 30 games from our group of 173, I see half wins and half losses.