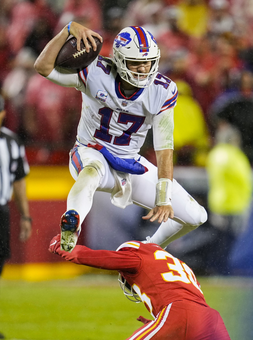 It was a crazy morning/afternoon to be watching the Red Zone Channel, with a point in time where four different teams were lining up potential game-winning kicks. A lot of misses (extra points and field goals) yesterday, but also some key makes. A fine line between winning and losing. Unless you're the Bills, just burying teams lately. On to the game.

Jets vs. Falcons in London: If you had Kyle Pitts this week, great week to start him, and it worked out, as it did for Matt Ryan. Good game also, again, for Cordarrelle Patterson, they let Mike Davis score, and Hayden Hurst did great for me in a best-ball league. As for the Jets, Michael Carter and Corey Davis seemed like the only viable starts. Davis, didn't work out great, but 8.5 PPR is serviceable as long as you didn't bench the wrong person. Carter lost a goal-line score to Ty Johnson but did have a touchdown himself, saving his day. Jets get a bye now to figure things out, Falcons aren't quite as horrible as perhaps might have been expected (although beating the two New York teams shouldn't be overrated). P.S. not a big fan of games that start at 9:30 a.m., I guess I'm just not quite ready.

Eagles at Panthers: For most of this game, Carolina's defense looked like it was going to decide things. Jalen Hurts and the Eagles offense did very little. But then Jalen Hurts started making plays, his receivers held onto a few passes (both Ertz and Goedert dropped key passes, including an easy touchdown for Goedert), and the Panthers offense hadn't done enough. And then Sam Darnold threw 3 interceptions and that was that. I've seen a lot of these teams now and I'm not sure either one is playoff caliber. The wins are ugly and the losses are uglier.

Packers at Bengals: One angle here might be that rookie kicker Evan McPherson let the team down, but I kind of think the coaching staff did. On both of his long potential game-winners, it felt like the offense could/should have gotten closer, but was content to let him try the longer kicks. Which he had enough leg for, but one hit the upright and the other the flag atop it (embarrassingly, McPherson thought that one was good). Cincinnati certainly could and maybe should have won this one, though it's also true that Green Bay should have won earlier than they did. Impressive game for Joe Burrow (who appeared to get hurt early on but turned out fine) and JaMarr Chase, and of course Davante Adams. The Aaron Rodgers t0 Randall Cobb pass that set up the game-winning field goal was just a sick throw by Rodgers, albeit not particularly well defended. But Cobb earned his quarterback's faith there. Both Joe Mixon and Samaje Perine scored, so you made out OK if you gambled on that tricky situation.

Patriots at Texans: In both the Packers game and this one, some teams are just better at winning close games than others. Credit the players, credit the coaches, whatever. It felt like New England would win this game even when they were trailing big, and they did. Damien Harris scored an early touchdown and was going in for a second when he had the ball punched out just inches short of the goal line. We know what that means, there was a lot more Brandon Bolden and even Rhamondre Stevenson getting work. But New England was also behind which might have benefited Bolden, who had a big run on the winning field goal drive. Nick Folk came up huge in this game, and Mac Jones hit a couple of key throws, including a sweet touchdown to Hunter Henry. For the Texans, Davis Mills made a couple of legit throws and he wound up passing for over 300 yards. Considering how awful he looked against the Bills, impressive stuff. I'm going to choose not to place any stock in the big Chris Moore game, which was mostly one long jump-ball touchdown which was nearly intercepted.

Titans at Jaguars: Too much Derrick Henry and too much Titans for the Jaguars, who look like they're going to be doing a whole lot of losing this year. Not much doing for either passing game, unfortunately, with the only touchdown going to Jacob Hollister, who no one has rostered let alone starting. And MyCole Pruitt for the Titans. Big games for James Robinson and Trevor Lawrence, at least. Start players against the Jaguars (not every team has a Henry doing all the heavy lifting).

Lions at Vikings: I know the main storyline from this one will be Oh the Lions find another way to lose a heartbreaker, and that's fair. But I choose to view it in the context of, Greg Joseph missed a 37-yard field goal in Week 2 that cost the Vikings a win, but Minnesota stuck with him and Joseph came up huge today, nailing 4 field goals including the long game-winner. Good for him. Alexander Mattison was huge in the game and in fantasy, though he did have a costly fumble late while fighting for extra yards with the Vikings merely needing to run out the clock. Anyway, some clutch plays by Kirk Cousins and Justin Jefferson, but even more by Joseph. Tough loss for the Lions, with D'Andre Swift the best player on the field for them.

Broncos at Steelers: Pretty painful to watch both of these teams on offense for much of these games. But after Denver had fallen way behind, Teddy Bridgewater hit some big plays to Courtland Sutton, so they (and Tim Patrick) finished with good numbers. There will be weeks when things work out. Javonte Williams, I thought, looked pretty good; more touchdowns would be nice. Najee Harris remains the best thing to watch for the Steelers. I considered starting JuJu Smith-Schuster but trusted the rankings, which worked out when he got injured early on his second running play of the day. Big game for Chase Claypool and a long touchdown for Diontae Johnson to save his day. Denver's schedule has gotten tougher and back to back losses is the result.

Dolphins at Bucs: If we can say anything about the Dolphins backfield, we can say that Myles Gaskin looks best if the team is likely to lose. And we did say that, and it worked out OK. The rest of the Dolphins offense was pretty poor and their defense was even worse. Bucs are rolling as most kind of figured they would be from the get-go. Antonio Brown was an Index-favorite in the preseason and he's having a pretty good season thus far. Leonard Fournette too.

Saints at Football Team: As if the Washington Defense wasn't disappointing enough, in this one they turned in about the most poorly defended Hail Mary you'll ever see: let the offensive players jump while you watch and wave your arms above your head. That touchdown to end the first half gave the Saints the lead they didn't surrender. Big points for Marquez Callaway and ultimately Jameis Winston too.

Browns at Chargers: Instant classic, with Justin Herbert, Austin Ekeler, Mike Williams, Nick Chubb and Kareem Hunt doing big things all game long. David Njoku, too, unexpectedly. Herbert and his 5 total touchdowns against what's been a really good defense this season is the biggest story, but there were plenty of fascinating sidelines (a nod to Baker Mayfield, who did his part in the shootout). In the final 2 minutes I saw something I've never seen before. Chargers, trailing by 1 at the 5 with a minute and a half left and Cleveland out of timeouts, wanted to run the clock down before scoring. Ekeler, who shrewdly went down on the previous play rather than scoring, was just hanging out short of the goal line, at which point 3 Browns defenders grabbed him and dragged him across the goal line. I've seen defenses let players score; I'd never seen them basically carry players into the end zone. Chargers defense held. Great game. What a contract year Mike Williams is having. Gotta be rough for Dolphins fans watching Herbert.

Bears at Raiders: Early Josh Jacobs TD erased by a penalty. Jacobs running hard early though, good to see. Later he did score, and was basically the only highlight of an offense that struggled most of the game. Credit to the Bears defense, and there were some distractions for Las Vegas this past week that perhaps didn't help (but regardless, the Raiders' fast start to the season is just a memory now). Justin Fields didn't do a lot (where's the running guys?) but did enough to get the win. Gonna be a run-heavy offense, though, which makes the receivers kind of useless. Bears are an ugly 3-2, but that counts too. Bryan Edwards dropped a bomb at one point that kind of typified Las Vegas' day.

49ers at Cardinals: Benched Chase Edmonds last minute, worked out. Not a guy you should say yeah, I'll play him hurt. James Conner scored, if you went that route. San Francisco's defense did a nice job on the Arizona offense, basically holding Kyler Murray and the passing game in check, but Rondale Moore made some plays early and DeAndre Hopkins late, and that was enough. Trey Lance, well, he ran plenty, didn't kill you if you started him. But passing game didn't do much. Elijah Mitchell back as the main back, not great, but promising if you need to use him going forward. Trey Sermon got 1 carry.

Giants at Cowboys: Tough game to watch for Giants fans. Saquon Barkley left early with an ankle injury away from the play, just stepped awkwardly on a Cowboy's defender. Scary, swollen afterwards, but as I write this it's too soon to say it's more than just a sprain, so fingers crossed. Daniel Jones left with a concussion, and then Kadarius Toney -- having a breakout game -- left after taking a swing at a Cowboys defender. Prompted, but still. Dallas offense rolls along, Dak and Zeke and his receivers all look great right now. Dallas looks for real to me; I realize it's early. Giants have another Monday and week of hoping for good injury news.

Bills at Kansas City: Can Kansas City overcome its defense these days? Maybe against some offenses, but not one as potent as the Bills, not last night. Josh Allen and company look great, and Buffalo's own defense was clearly frustrating Mahomes, with a lot of passes skipping in short or off-target to receivers. Couple of costly drops by Tyreek Hill, too, frustrating to those of us who started them. Not a great outing for most KC players, and Clyde Edwards-Helaire left with a knee injury that looked bad. It's early, but I'm not sure there's enough time for Kansas City to straighten things out enough on defense not to have more losses of this type (Chargers looking like the division favorite these days).

Monday, Monday: If there's going to be a ripple of teams getting bounced in my Survivor pool, it will take the Colts knocking off the Ravens here. It's not as far-fetched as all that, with the Ravens having nearly lost to the Lions, but hanging your hat on Carson Wentz playing well is an iffy choice. Seems fairly clear the Colts aren't going anywhere this year, so call this one a chance for Baltimore to say whether it's going to be able to hang with the AFC's better teams, or not. Ravens 26, Colts 20.