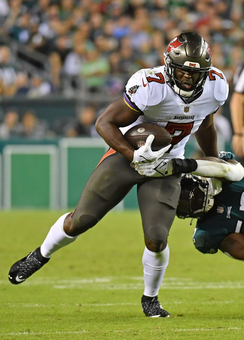 This was a not-so-great game with one team pretty much dominating most of the way by going through the motions, the other running around like a chicken with its head cut off for three quarters before somehow, improbably, being a defensive stop (that it didn't get) away from having a chance to win. That's life of an Eagles fan these days.

When this game started out, it looked like Tom Brady was going to throw about 8 TDs. The Bucs moved the ball fairly effortlessly down the field their first two drives, facing only one 3rd down on each. Six different receivers caught passes. Next two drives ended with punts (Ronald Jones was in for one of them, coincidence?), but then Brady led another long touchdown drive. Tossed up a crazy interception in there too, but at the end of the game he, again, led a long drive enabling the Bucs to kill the clock.

Brady looks mostly great these days. Getting great protecting, standing in the pocket and making accurate throws to all his targets. Converted what was basically the game-ending third and long to Antonio Brown with a strike. It's a pass-first offense that's loaded with weapons. Next week the Bucs get the Bears, which will maybe be a little more difficult, but I don't see much profit in sitting down Brady these days.

Jalen Hurts is a different story. In this game you pretty much had ammunition for both the fans and the haters. He completed just 12 passes for 115 yards, which is terrible, particularly since it came against the league's bottom-ranked pass defense. But he also ran for 44 yards and 2 TDs, so if you're starting him every week in fantasy leagues, you're cleaning up. His best throw was a 2-point conversion. He also had a couple of deep balls that resulted in pass interference penalties, with Tampa Bay's fourth- and fifth-string cornerbacks frequently wrapping up receivers (more penalties could be called). This won't hurt the Bucs much against guys like Hurts and Justin Fields next week... actually, glancing at their schedule (Saints, Washington, Giants) it might not really hurt them for a while. But it's a flaw in this Super Bowl favorite.

What is clear is the Eagles aren't doing Hurts any favors right now. They called ONE first-half running play. (Not counting Hurts runs.) Look, I'm well aware the Bucs are impossible to run on. Plenty of smart teams, like the Patriots a couple of weeks back, will simply choose not to run. But that's one thing if you have a polished, accurate quarterback quickly picking out the soft spot in the defense and hitting them with short, sharp throws. That's not Hurts. He was taking the snap, running around in the pocket, and either running for his life or throwing up jump balls and hoping his receivers made plays or drew flags (which happened plenty). That's not an offensive game plan, which is why the Eagles essentially had one drive in the first three quarters, and didn't do anything until the game was nearly out of reach.

I saw a stat yesterday on Hurts showing fantasy points by quarter. He's got about twice as many in the 4th as every other quarter. That's fine in fantasy leagues, but it's not the way to run an NFL team. The Eagles are 2-4 headed for 4-12. Sorry, 4-13.

We said a couple of weeks ago that Leonard Fournette is the unquestioned guy in the backfield. Even when Ronald Jones scored a short touchdown a couple of games ago, it was clear it was a fluke. Jones is barely playing. Fournette is not only dominating snaps and carries, he's earning it, breaking tackles and running over people on every play. I think I heard Troy Aikman say something about how impressive it is, "This is a guy who was released by Jacksonville..." I mean, the Jaguars make terrible decisions on a routine basis, so I don't think anyone believed Fournette's career was over just because the Jaguars dumped him. Whatever, Fournette's an every-week type of fantasy start in a great offense, behind a great line, with a quarterback on top of his game. He's even getting more of the passing downs works than Giovani Bernard.

Miles Sanders surprised the Bucs with a couple of nice runs late. Hard to put too much stock in it. The Eagles have no interest in running the ball in general; this wasn't a Bucs-specific game plan. Sanders getting some cheap carries and yards against a Tampa Bay team that had decided the Eagles weren't going to run it (again: one first-half running play) means little to me. (It was funny when the crowd gave a sarcastic cheer at a Sanders run to pick up a first down.) During the Weekly research I speculated to Ian that perhaps Kenneth Gainwell should get more love, since running backs in recent games against Tampa Bay had put up huge receiving numbers, with several 5- and 6-catch games. Gainwell had a single catch, Sanders had 2.

In August we thought that Antonio Brown would have similar numbers to Mike Evans and Chris Godwin. He should be on a lot of Fantasy Index teams, since he was selected way later in most leagues, and everyone should be happy. Turns out that he's maybe going to have better numbers than both of those guys this season. Much better? He's the No. 1 right now. Godwin is catching the most passes after Brown, but most of it seems to be between the 20s. Evans did get an end-zone target last night, drawing an interference flag, but he seems like the No. 3 -- not a big part of the offense right now. I guess the positive is it's not like these guys should all be started equally, and it's a spin of the wheel if you choose right. Brown is the one to choose. Godwin is 2nd. Evans needs to score to pay off.

Quez Watkins was the best Eagles receiver last night. Caught a 2-point conversion. Caught another ball but was out of bounds. Drew an interference penalty in the end zone, and drew another long flag to help set up a score. But you don't get fantasy points for that, so his 3-catch night didn't really work out. More people were certainly starting DeVonta Smith, but there just wasn't enough volume for either him or Jalen Reagor to pay off. Hurts completed 12 passes. Glancing at the Eagles upcoming schedule (Raiders, Lions) maybe Smith will have a couple of good games coming up. But hard to feel good about investing in these wideouts.

O.J. Howard hadn't done much to this point, but he was on the field plenty, and last night they let him leak off the line for a couple of key grabs, including a touchdown. He had 6 catches on 7 targets, an encouraging usage...except Rob Gronkowski will probably be back for the next game, and Howard will be underused again. Cameron Brate, certainly, is deep down the ladder for targets. Maybe a couple of drops in the first game Gronk missed are factors, or maybe it's just that Brate isn't that good. In any case, can't really use him, and I'm not sure if you'll be able to use Howard once Gronk is back.

Jay Glazer had a report yesterday that he wouldn't be surprised if Zach Ertz or Dallas Goedert is dealt before the trade deadline. We've been hearing about Ertz possibly being traded since the before times, but it's the first time we've heard about the Eagles possibly keeping Ertz and trading Goedert. I have a theory that it's because Goedert actually isn't very good, which most of his play this season supports. Anyway, if one of them is gone, the other one looks viable in this passing game, as we saw with Ertz catching a third of his quarterback's completions and an easy touchdown last night.

A disappointing 4-point night from Ryan Succop. It's an occasional problem having kickers from offenses that are just too damn efficient. Jake Elliott missed his only field goal chance, nobody should be starting Elliott given what the Eagles kicking game has neglected to provide for years now. Was amusing when they befuddled Troy Aikman by going for 2 after scoring the touchdown to pull within 28-20. I suppose I would have been against the strategy at some point too, but I suspect the Eagles with Hurts at QB are about as likely to convert one of two 2-point attempts as they are to make both extra points anyway. Point spread was 7 last night, so there were a lot of bettors happy or unhappy about the way things turned out. Uh, which is always the case, right?

I'm a little salty this morning which tends to happen after watching the Eagles play offense for three hours. It started a year ago and I used to blame Doug Pederson, but it's a new coach and they're still doing it, so maybe I need to look at Hurts as the common thread (although he didn't start until late last year). Main takeaway is that they're a frustrating team to watch and I'm not sure whether it's the coach or the quarterback. Maybe this team grab-bags its way to a 7-10 season, but at no point do I expect to look at this offense and say, Yeah, they've really put things together.

The Bucs, well, they're gonna be tough to stop from getting to another Super Bowl.