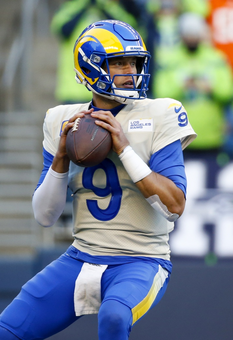 There always seems to be some drama when these division rivals meet. Last night was a wild one in which starting running backs were hurt before or during the game, starting quarterbacks were hurt in the first half and the second, and previously slumbering players had big games. Let's get to it.

Both quarterbacks and offenses got off to painfully slow starts; there was only one touchdown scored in the first half. Matthew Stafford completed a bunch of passes to his main wide receivers early, but he was also wild on several throws, missing a wide-open Robert Woods for what would have been a 30-yard gain and underthrowing one for an end-zone interception on a ball he was trying to get rid of. His hand was being checked out early for a finger injury (ironic foreshadowing) and there might have been an issue, but he stayed in the game and threw for 365 yards and got the win. Seems fine, and now has some extra time to rest before the next game.

Russell Wilson, in contrast, was sharp early (8 for 11 for 133 and a touchdown in the first half). But he also had an interception on a force into Tyler Lockett, he wasn't getting a lot of help from his running game, and he later missed a long touchdown to a wide-open Lockett on a play he got drilled -- and suffered a hand injury. Wilson hasn't missed a game in a decade but looking at his swollen finger that sidelined him for the final quarter of this big divisional game you wonder if he'll need to miss a start. Geno Smith relieved and kept things interesting, throwing a touchdown to DK Metcalf on a poorly defended play. He was intercepted to end things, but that might not have been his fault (Lockett was the intended target, again, and fell down). But pretty clearly if Wilson misses games Seattle will be a lot less likely to get wins.

Chris Carson was ruled out before the game with a neck injury, which doesn't usually sound like a one-week thing, though we'll see. Alex Collins was fine in relief; ran hard, as he always does, but didn't find a lot of room against a very good Rams defense. I'm not sure Carson would have done any better. Seattle faces Pittsburgh and New Orleans the next two weeks, and they're not easy to run on either. What was a little weird was that DeeJay Dallas played a little more in passing situations, weird because it had been Travis Homer previously. But neither one played much or did much, so I don't know that anyone should be running out to grab Dallas. He played 14 snaps compared to 8 for Homer.

Darrell Henderson looked really good, playing two-thirds of the time and finishing with 99 total yards and a touchdown. He was sidelined briefly with some kind of an arm issue, alarming those of us who started him, but Sony Michel didn't look as good and Henderson wound up returning, at one point running in a 5-yard touchdown. Later in the game Michel ran one in from 2 yards where he wasn't touched; not exactly sure what the Seattle defense was doing in terms of goal-line defense on that play; Stafford could have run it in too. Seattle will make a lot of running backs look good this season, but my main takeaway is that Henderson is just the better back, and if he stays healthy (a big if, I realize) he'll continue to get about 70 percent of this backfield, including some short touchdowns. Michel will also be a factor on these plays, but anyone thinking Michel would be the lead back here with Henderson healthy -- not gonna happen.

Just yesterday Ian speculated in the mailbag that Robert Woods might be similar to Cooper Kupp the rest of the way. Ho ho, right! But in fact the Rams did say they needed to get Woods more involved, and there he was catching 12 balls on 14 targets for 150 yards. Kupp wasn't nearly as good as he's been, obviously, but he also had a nice 16-point PPR day. I think Kupp is still going to generally be the guy, but at least the Woods who barely showed up in the box score the first three weeks with Kupp going wild should be a thing of the past. If you bought low on Woods, congratulations; looks like it should be more of a 1-2 punch in most games.

Van Jefferson caught a ball early but that was his only reception; might be hurt by Woods' emergence. Also catching one pass was DeSean Jackson, a 68-yard bomb that would have been a long touchdown in his younger days but he seemed to get tired at the end of it and had to ease out of bounds. Jefferson played about twice as often, just not enough catches to go around.

DK Metcalf and Tyler Lockett dominated targets as per usual. Metcalf's 2 TDs made him the best in this one, but worth noting that Lockett actually saw twice as many passes, 2 of which were intercepted as noted. If Smith does need to start for any length of time, I'm thinking Metcalf will be a little better -- Metcalf might be better anyway. But you'd rather have Wilson starting.

Seattle placed Dee Eskridge on IR with a concussion suffered back in Week 1, which is pretty concerning. Will be Penny Hart and Freddie Swain as the reserve wideouts, neither of whom seems likely to be usable (Swain has some big-play potential).

With Gerald Everett still on the COVID list, Will Dissly was the main tight end, catching 2 passes. Doesn't seem to be a big part of the offense, and when Everett returns they'll divide chances. For the Rams, Tyler Higbee had a nice touchdown grab; might be the 3rd-best receiver in this offense in a lot of games. Just 1 other target last night, though.

I don't remember exactly when or why Seattle unveiled these bright green uniforms, but they've got to go. They're garish and seem to cast a sickly green hue over the rest of the football field. Just my opinion and often I like bright shiny things, but these are eyesores.

If we're thinking about halftime adjustments, the Rams certainly seemed to do a better job of putting things together in the second half. Yes Seattle lost Wilson, no getting around that, but even before that I thought the Rams looked like they came out of the break with a better plan than the Seahawks on both sides of the ball. Gonna be a wild year in the NFC West (AFC West) too, but I sure like the Rams better right now. And it will be even more so if Wilson needs to miss time.