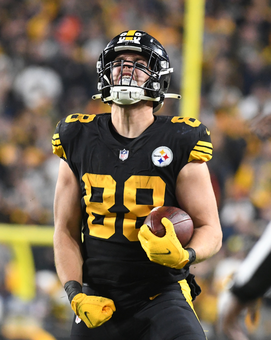 ASK THE EXPERTS appears weekly from training camp through the Super Bowl with answers to a new question being posted Thursday morning. How the guest experts responded when we asked them: After the elite options, which lesser tight end would you most like to have the rest of the season?

I've found two other TEs to help my high-stakes teams out immensely in 2021. First, Dalton Schultz has emerged as a solid PPR target for Dak Prescott. While he hasn't scored too much, Schultz has drawn a solid target share and is very consistent when Dak plays. The other is Dawson Knox, who couldn't be stopped until a broken hand sidelined him a few weeks back. Knox doesn't draw the targets that Schultz gets, but he seems to be a more effective red-zone target, as well as big playmaker. It looks like Knox likely returns from his injury this coming week.

I'd have to lean towards Dan Arnold on this one. Since he was traded to the Jaguars, he's already had three games with 60+ yards and the offense doesn't have any strongly preferred receivers. He's offering underneath stuff to Trevor Lawrence and the Jags' remaining schedule is one of the lightest in the league. It may not end up with a lot of wins, but it can help Arnold continue to post above-average stats.

A couple of young ones have been coming on, and they were both on display on Monday night. With Justin Fields getting more comfortable, I think Cole Kmet is starting to look like a viable tight end. He’s caught 16 passes in his last four games. And Pat Freiermuth has carved out a role for the Steelers, particularly in the red zone. He’s caught 16 passes and 3 TDs in his last three games. Including the preseason, Ben Roethlisberger has thrown 12 TDs this year, and Freiermuth has caught half of them.

Pat Freiermuth has 3 TDs in the last 2 games for Pittsburgh. Big Ben hasn't been throwing deep, so shorter tight end routes certainly fit his current capabilities. The Steelers don't seem to be going away, so Freiermuth might be a decent option going forward.

I will cast a vote for Dallas Goedert. I'm not sure he's actually that good -- watching him play I frequently see him either dropping a pass or turning the wrong way on balls thrown his way. But I think he's being underestimated because his numbers haven't actually taken a big jump since the team traded Zach Ertz, which I think is due to the team passing less in general for a stretch of games. That's not going to continue; upcoming run defenses aren't as soft as what they've faced recently. Eagles will need to pass more, and Goedert is going to be one of the top 2 options for Jalen Hurts.