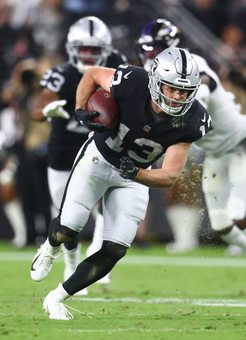 Which wide receiver benefits most from shake-up?

ASK THE EXPERTS appears weekly from training camp through the Super Bowl with answers to a new question being posted Thursday morning. How the guest experts responded when we asked them: With wide receiver movement involving the Rams, Browns and Raiders, who benefits most?

Hunter Renfrow. The third-year vet is having a career year after just 9 games. He has the eye of Derek Carr, and is the only wide receiver left on the depth chart that is not over-the-hill (DeSean Jackson) or washed up (Zay Jones). Bryan Edwards needs to show up a few more games before I believe in him. And....the Raiders look to be in some shootouts in the weeks ahead. Everything looks like a trend up for Renfrow.

I have died on this same hill many times before, but why not -- call it the hill on which my carcass will rot. OBJ is still a very good player, I swear, and while not a perfect match for all of what Robert Woods does for the Rams (offensive snap percentages in the high 90s are no longer Beckham's style), he should be a good match for much of what Matthew Stafford does as a passer. Never mind the past ... checks notes ... four and a half seasons of disappointing results. My colossally stupid patience is about to pay off.

The Rams would seem to be the pat answer here. They coincidentally lost their No. 2 Robert Woods right when Odell Beckham shows up. Van Jefferson has the look of a career No. 3 guy that can contribute and play a valuable role, but be best used as a possession receiver with a higher volume of shorter passes. But Beckham hasn't been elite in five years, has been very injury prone and still believes his first three seasons define him when it is his last five that does. So I like Donovan Peoples-Jones to have the biggest change in value, getting a chance to be the No. 2 in Cleveland. The team is a run-first offense, but there are plenty of games on the way that have to rely more heavily on passing.

Odell Beckham wasn’t much of a factor in his debut, but I expect he’ll be a productive receiver in the remaining weeks. They’ve got a bye week now, with a chance for him to learn more of the offense and build a rapport with Matthew Stafford. I don’t think he’s going to be as good as what they were going to get out of Robert Woods, but I’m expecting he’ll put up top-30 receiving numbers in what’s left of the season.

OBJ is a lightning rod. Having him on your team is a recipe for discord. A major knock against him is the quarterback becomes mentally obligated to get him the ball. Another criticism is that he freelances his routes so the quarterback is not always sure where he's going to be. This immediately manifested itself during the Rams vs. 49ers Monday night. On the first drive, Stafford tried to force a long pass to a double-covered OBJ, resulting in an interception. Replays showed he broke off the route, plus Cooper Kupp was wide open for at least a 25 yarder. Bad Juju for Los Angeles and they got waxed. In Cleveland, Baker is beat up so you can downgrade all their receivers going forward. The running game is all the Browns have going for them.

The bye comes at a good time for the Rams. They need to figure out how to get Matthew Stafford back to the level he was at a couple of weeks ago, and they need to figure out how to incorporate Odell Beckham. I'm not a big believer in Beckham, but I am in Sean McVay -- he'll figure it out. With Robert Woods on IR, either Beckham or Van Jefferson is going to step up as a significant No. 2. I think both of them merit close watching, since one (and my lean is Beckham) will be a significant player over the rest of the season. With the Browns, their wideouts weren't significant with Beckham, and they probably won't be without him.