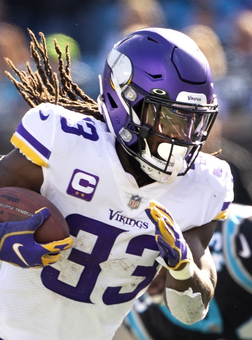 Ian Allan answers your fantasy football questions. In this edition: Is now the time to trade away Dalvin Cook in a dynasty league? Who would replace an injured Jonathan Taylor? AJ Dillon's rest-of-the-season value. And more.

Keeper League - full PPR - out of playoffs. I have Dalvin Cook. Barkley owner is offering Barkley and pick 1.01 (it’s my pick from a preseason trade, so know it’s the 1st overall pick) for Dalvin and my 4th rounder. Would you make the trade?

Yes. Definitely. Cook is better than Barkley right now, but he’s always had problems staying healthy. He’s been in the league for five seasons, and he’s missed at least two games every year. How much longer is he going to remain a top back? He’s 26 now, but he doesn’t look like a guy that’s going to have a long career. And how are they going to use him next year? They’re probably going to have a new coaching staff and a new offense. Barkley, of course, hasn’t been durable either, playing in only 36 of 57 possible games as a pro, but he’s a year younger and is a really good pass catcher, which translates well into your PPR format. He very reasonably could have a better remaining career than Cook. So if you’re getting the first pick of next year’s draft thrown in, I think it’s a move you make.

Who would be a worthwhile backup behind Jonathan Taylor besides Nyheim Hines? Hines is already taken in my league, and I would like some "insurance" for Taylor going down the stretch.

We tend to think of these backs like Taylor and Najee Harris as being indestructible, but it’s the most physically demanding position in the game. Derrick Henry was one of those guys, of course, and he’s now out. If something were to befall Taylor, I would think the Colts would plug Marlon Mack into the starting lineup. They would also expand Hines’ role, I would think, employing more of a one-two punch backfield. Expectations, I would think, would need to be modest. Indianapolis has a great offensive line, but Mack isn’t as good as Taylor. He ran for 1,091 yards in 2019, but I’m not sure if he’s fully back from the Achilles injury he suffered in 2020. Mack carried 5 times for 47 yards in the Monday night shootout at Baltimore, looking pretty good, but he’s carried only 23 times for 54 yards in his other games. He hasn’t been active in recent games.

Thanks for all your support these many years. Thinking of making a trade. Total points PPR league. QB is Brady. RBs are Henderson, Fournette, Damien Harris, Melvin Gordon and Javonte Williams. WRs are Adams, K.Allen, Beasley. DEF are Patriots and Cowboys. I'm in 1st place overall just measley points in front of at least 5 teams in a 12 team league. The 2nd place team wants to trade me Marquise Brown and the Rams for Melvin Gordon and Dallas. Seems like a no brainer to me. To me the Rams are better than Dallas and Brown is clearly better than Gordon although I don't like breaking up the Gordon/Williams Denver share knowing that one of them gets hurt the other then becomes gold. What do you think?

The Gordon/Williams point is a good one, but if the Broncos were to lock in on one of those backs (moving him into a more expanded role) it would far more likely be Williams. With eight weeks left, I would be comfortable moving down to a four-man backfield of Henderson-Fournette-Harris-Williams. At the same time, you’ve got a nice trio of wide receivers. With it being PPR, Beasley is a nice contributor; he’ll have some games with 6-7 catches. I’m not exactly sure how points and lineups are tabulated, but I would think Hollywood Brown (if you could land him) will have some weeks where they’ll score well enough to come in ahead of Allen and Beasley. He’s been catching more touchdowns than all three of those guys.

You have AJ Dillon in the top 13 as a RB in all categories of the most recent Redrafter. Did you mean that to be Jones from Green Bay? And if so, where does Dillon fall?

The Redrafter gets a little wonky late in the year, with games played becoming more of a factor. You get a guy like Aaron Jones, who’s still got a bye coming up, and he’s going to play in at most five of the remaining eight weeks. That’s if there are no issues as he comes back from his knee injury. And for those in leagues ending in Week 17, he’s actually playing in only four of seven. With AJ Dillon, you’re getting a player who should be really good in these next two weeks – maybe a top-5 running back – and when they come back from their bye, he might be about as good as Jones. They’ve been moving to more of a one-two punch backfield anyway. Prior to the Seattle game (where Jones got hurt early), Jones averaged 60 rushing and 27 receiving yards in his last six games. Dillon in those games averaged 50 rushing and 19 receiving yards – he’s been playing. How they’re used coming back from the bye (if Jones is healthy) will be influenced by how Dillon plays in these next two. If he bangs out 130 yards in each of them, maybe they leave him in the starting lineup, easing Jones back in. In a general sense, if I’ve got a 5-5 team and I’m trying to make the playoffs, I would want Dillon – a guy who can help me win games right now. If I had an 8-2 team, with a playoff berth pretty much locked up, I would give more consideration to Jones perhaps being better in Weeks 14-16.

You suggest using Tennessee WR Marcus Johnson in Fantasy Index Weekly, but you don't have him ranked on your WR list.

He’s a low-level starter for Week 11, I think – a worst-case scenario guy. If you’re in desperate need of a starting receiver for this week, he might be the best available on the waiver wire. He played pretty well last week, of course, catching 5 passes for 100 yards against the Saints. They were able to connect with him on some crossing routes, where he was coming through traffic and had some room to run. But over the course of the season, he hasn’t been any better than the other modest reserve receivers on that team – Nick Westbrook-Ikhine and Chester Rogers. And that passing offense hasn’t been great. I’ve currently got him down for 3 catches for 45 yards, with a 25 percent chance of catching a touchdown. (That’s a little higher than he appeared in the Wednesday product, and it ranks him just outside the top 50 among wide receivers in all formats.)