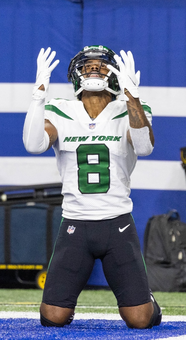 I have been rostering NYJ Corey Davis this season based on redraft rankings. Although Elijah Moore has been coming on strong for over a month, I was still reluctant to drop Davis for Moore because of their rankings. So Moore has a big game last week w/ Flacco and now jumps 20+ positions ahead of Davis in this week’s rankings. Little frustrated I didn't go with my instincts and make the drop/add. On top of that, the guy one game behind in the standings picked up Moore before last week’s games ... Please let me know your thoughts.

They’re putting Zach Wilson back in the starting lineup on Sunday. Let’s see what they look like. So far Wilson has thrown 4 TD passes, and Davis has caught 3 of them. He looked like the clear No. 1 guy in those games, and he looked like the clear No. 1 option in the preseason. Over the last month, they’ve been using other quarterbacks. During this new period, Moore has started playing well. In the games Wilson started, Moore caught only 9 of the 26 passes thrown his way, for 79 yards (with no touchdowns). In the last four games (with other guys starting) Moore has caught 24 of 31 passes sent his way, for 336 yards and 4 TDs. Davis didn’t play in Weeks 8-9, and he arguably outplayed Moore in Week 10, catching 5 passes for 93 yards. At what does one switch from Davis to Moore? For me, if we’re walking into a draft today, I would select Moore before Davis. But it wouldn’t surprise me if the answer to that question changes again on Sunday.

I wouldn’t. Johnson had those three games where he caught 5-6 passes, but those all happened with Mike White at quarterback. They’re going back to Zach Wilson now, and he hasn’t shown that same tendency (or ability) to dump off the ball into the hands of his running backs. Wilson’s got five full games on his resume, and Johnson in those five games caught 6 passes for 51 yards. Freeman right now looks like Baltimore’s best running back; I would not cut bait on him to take a flyer on Johnson. For the Jets, I expect Tevin Coleman will do more of the ball carrying on Sunday at Houston.

With Derrick Henry out, 'Miami' Tannehill is back. How much impact to AJ Brown?

In two and half games without Derrick Henry, A.J. Brown has struggled. He caught only 6 of 15 passes thrown his way against the Rams and Saints, for 58 yards, with no touchdowns. Those are tough pass defenses, of course, but you would hope for a little more. Then he caught 5 of 9 pass attempts for 48 yards against the Texans before leaving in the third quarter. I would think Brown will have another down game on Sunday in Foxborough. Then they’ve got a bye week to heal up and regroup before playing three of their next four at home.

Struggling to hold onto first place. Predicament for my second WR spot. Full point PPR. Gallup, Aiyuk or Mooney? What do you think?

With Cooper out (why don't these guys get vaccinated!) my choices are Callaway, Hilton or Shepard. Callaway has been okay and caught some TDs (and it gives me a reason to watch Thursday night's game) but they're against Buffalo and the Bills may be mad about the hurt Indy put on them last week. Hilton playing TB and their secondary is pretty tough, but hopefully, they concentrate on Pittman. And Shepard? Who knows with him. Any thoughts would be appreciated.

I wouldn’t be excited about any of those guys. I would guess that there’s a wide receiver available on the waiver wire in your league who would grade out higher than all three of those guys. With New Orleans having all kinds of injuries and facing a very good Buffalo defense that’s looking to bounce back, I have no interest in Callaway (and is he even one of the top 2 wide receivers on his own team?). Shepard’s trying to work his way back from a quad injury, and he’s on a crappy team that’s overloaded with other wide receivers. I guess if you want to speak on behalf of Shepard, you could point out that he’s played in only three full games this year, and he’s caught 7, 9 and 10 passes in those games. (He played in two others where he left in the first half with injuries). I guess if we’re trying to call glass from behind the 3-point line, T.Y. Hilton would be the guy. The Bucs may sell out some, trying to slow dow Jonathan Taylor, setting up Hilton to maybe hit on a long play. Hilton has hardly played this year, but he did get downfield for a long catch in one of his games. They’ve been launching a lot of deep balls, and Hilton can still make those plays. But my vote would be to look over the waiver wire, looking at who else is available. Cedrick Wilson and Marquise Goodwin, for example, arguably could be slotted ahead of those three guys.

I’VE GOT HERBERT HIGHER THIS WEEK. NEWTON, WITH HIS RUNNING ABILITY, SHOULD POST SOLID ENOUGH NUMBERS IN SOME OF HIS REMAINING GAMES. WHEN THEY’RE INSIDE THE 5, I THINK HE’LL BE RUNNING IN A LOT OF TOUCHDOWNS ON HIS OWN. BUT HERBERT ISN’T JUST A GUY; HE’S ONE OF THE UP-AND-COMING STARS AT THE POSITION. THE MATCHUPS WILL NEED TO LINE UP PROPERLY TO GET NEWTON AHEAD OF HERBERT.

Thanks to FFI I am in first place in both my redrafted and dynasty league! Question for the redrafter league: I have Najee Harris and am wondering if you recommend picking up his backup for the rest of the season, and who that would be? You have Snell listed as the next RB.

I don’t know that there’s one guy. In the event Harris were to be sidelined, they could (probably would) use a combination of their three other backs. If we’re picking one, I guess it would be Bennie Snell. But Kalen Ballage has actually played more than Snell in recent games. In their last five games, Ballage has been on the field for 36 plays (carrying 4 times for 15 yards in those games). Snell in the same five-game block has gotten only 22 plays (with 5 carries for 17 yards). Heading into the season, I thought Anthony McFarland was going to be their No. 2 back, but he was shelved by a knee injury. I think he’s healthy now, but McFarland has been inactive for most of their games, with just 1 carry all year. If worse comes to worst, I think they’ll give some carries to all three of them and see what happens.

Is Antonio Brown worth the risk this week? Or just go with Godwin?

I keep hearing that Brown is close, but he hasn’t practiced at all in over in a month. He didn’t practice at all on Wednesday. We’ll see what these next two days bring, but if we’re deciding right now, I would be going with another option.

Who has a better chance of playing this season- Calvin Ridley or Chris Carson?

Carson is undergoing surgery on his neck. He’s definitely out for the year. In an article in The Seattle Times, Pete Carroll was saying they were hopeful Carson would be ready to go next year, but it’s a wait-and-see situation. The article pointed out that off players who’ve undergone similar surgeries in recent years, a third of them never played again.