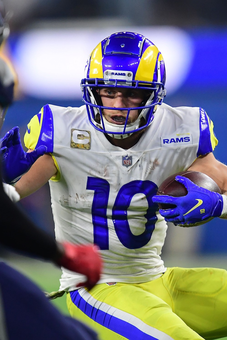 Which player are you most thankful for?

ASK THE EXPERTS appears weekly from training camp through the Super Bowl with answers to a new question being posted Thursday morning. How the guest experts responded when we asked them: Which player are you most thankful for?

I won't blame anyone who opts for Jonathan Taylor here, but give me Cooper Kupp. Wide receiver is traditionally a high-variance position, but he's been remarkably consistent. Targets, catches, touchdowns, explosive plays, it's all here. Even when Matthew Stafford plays poorly, Kupp routinely finishes with another big game. Unstoppable.

This is an easy one... Cooper Kupp. He's a huge reason for my first ever 9-0 start in the FFPC high stakes main event. He's been the most consistent producer for big fantasy points in 2021. What's not to be thankful for? My Kupp is full!

I would have said Michael Carter, for always giving me a running back that I can fall back on or even start with confidence in some matchups. But... sigh... he too is now hurt and will miss at least two weeks. So I guess I need to go with Jalen Hurts. I got him cheaply in many leagues and he's exceeded my expectations even if his "NFL value" isn't as high. Long as he runs, he doesn't have a bad fantasy game.

In most leagues, I’m one of the first to select a klcker. That position isn’t as important as most of the others, but you need to start one every week. I like to win at that position. This year, I misfired (or got outbid) on some of those early kicker choices, but in a couple of those leagues, I’ve been able to pivot to Nick Folk. And Folk’s having himself quite a year. He’s making his kicks, and the Patriots consistently have been settling for field goals. Through Week 11, he’s been the highest-scoring player at the position.

If we're being honest, it would be hard for me to name anyone but Cooper Kupp, who I have everywhere and is having a season for ages. But if you asked me a few weeks ago, he'd have been neck and neck with Kyler Murray, who was absolute money up until suffering that ankle injury against Green Bay, putting up big numbers (NFL and fantasy) in almost every week. One more: Tyreek Hill, who hasn't been great every week, but has had a couple where he won the week almost all on his own, which is always great to have on your side.