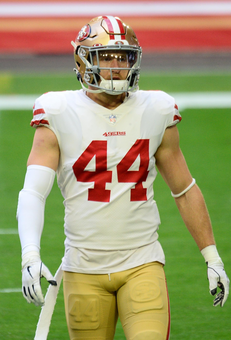 In my long-time league, I discovered that non-playoff teams can make roster moves after their teams are eliminated. The worst team in the league (which is playing in a so-called consolation bracket, even though it wasn't one of the six teams to quality for the playoffs) made SIX ROSTER MOVES in one day last week. The teams competing for the money -- some of whom had severe COVID issues with their players -- were robbed of the chance to get the best waiver adds. The commish ripped into me when I suggested that that wasn't fair to the teams playing for the money. What do you think?

Great question. We’ve had this same debate in our league. We’ve got 12 teams, with half making the playoffs. While those six teams compete for the big prize, the two teams finishing with the worst records in Week 15 playing in a Toilet Bowl game. Loser of that game has to put in an extra $20. The purpose of the Toilet Bowl game, with its monetary penalty, is to motivate teams to keep working at it – to avoid being that worst team.

Question, then, is how to handle waivers in Week 15? Those lesser teams are also playing a meaningful game (meaningful to them, anyway). We’ve debated this extensively in the DFL, and the majority was of the opinion that these lesser teams should not interfere with the more meaningful games. So we altered the waiver rules for the postseason. We’ve got weekly bidding (it’s a salary cap league) and only the true playoff teams can submit bids for the most coveted free agents. After those players are assigned at 8 p.m. on Wednesday night, then things are opened up for the remainder of the week. Any team wishing to adjust its roster (including the two cellar dweller teams) may do so prior to the start of the games on Sunday.

Clearly the idea for the fantasy postseason is not only to draft the right players but also those who can last the longest leading up and perhaps into the Superbowl. With that in mind do you ever produce such a ranking? Your thoughts on who will last the longest?

We’ve put together a couple of playoff publications this week. We one that went out yesterday where we took a close look at each of the six games being played this weekend, with projections for every player on every team. On Monday, we released an overall board, showing expected total production for each player on each team (for all four weeks of the postseason).

For the overall board, as you point out, the key factor is how long the teams will stay alive. You can debate the merits of Mahomes, Allen and Burrow, for example, but those guys are similar enough that ultimately the best of those three AFC quarterbacks will be the one who advances to the Super Bowl (allowing him to play in four games). Figuring out the winner of the AFC, I think, is key. (Similarly, if you think there’s an NFC team that’s going to beat Green Bay, that’s where you want to spend your resources.)

After looking at the games and playing around with the numbers, I see four teams that I have the most confidence in playing three-plus games: Kansas City, Tampa Bay, Cincinnati and Green Bay. To me, Green Bay is the favorite to win the whole thing, but it’s capped at 3 games. Cincinnati might be a surprise to some, but I think they’re a very safe choice to beat Las Vegas on Saturday; I think they’ll be playing at Tennessee in the next round, and I think they’re going to win that game – that would give Cincinnati at least three games. I feel a lot more confident about Cincinnati beating the Raiders than I do about the Bills beating the run-oriented Patriots in single-digit temperatures.

Projected games for each playoff team appear below – a number from 1 to 4 for each team, with the Packers and Titans capped at 3. The Steelers and Raiders are the teams most likely to lose this week, so I’ve got them close to 1. Pittsburgh is at 1.05 (meaning if they played at Kansas City 20 times, they would win one of those games). Las Vegas is at 1.10 (meaning it would win 1 of 10 games at Cincinnati).

Thanks again, we enjoyed successful seasons! Our NFL playoffs differ from a draft in that you select a starting line up each week of any player you want at that position but you can only use that player one time. Any tips?

As luck would have it, I signed up for one of these leagues yesterday. Each week you submit a lineup of a QB, 2 RB, 3 WR, TE, flex, K and Def, but you can only use each player once. By the end of the competition, you’ll have used as starters, 4 quarterbacks, 8 running backs, 12 wide receivers, 4 tight ends, 4 kickers, 4 defenses and 4 other players from the RB-WR-TE pool.

It’s an intriguing game, in my opinion. On the one hand, you want to make sure you’re not left short-handed at a position. If you use Aaron Rodgers and Patrick Mahomes in the first two weeks, for example, and those teams make it to the Super Bowl, you would be left using Chad Henne or Jordan Love in your final lineup. But on the other hand, if you save a franchise player and his team is eliminated, then you simply never got access to that player. So I would think one general principle is to decide on a team that you believe will be in the Super Bowl, and save its notable players for that final week. Green Bay, to me, looks like the safest choice to be in that game, so I’m thinking I’ll be saving Rodgers, Adams, and at least one of those running backs. Tight end looks like a trouble spot. I wouldn’t want to be starting Josiah Deguara, but it would be awfully risky trying to save Travis Kelce for that final game.

My other general thought (and like you, I’m knew to this game) is to make sure to use the franchise-type players on teams that are sure to get cashed out. Diontae Johnson and Najee Harris, for example, logically should be in everyone’s lineups this weekend. You use those guys, they give you some production, and they give you a larger remaining pool to work with in the remaining rounds. Zach Ertz is a guy who’ll be in my first lineup, considering the number of balls he’s been catching (we’re using PPR scoring). He’ll either be my tight end or my flex (Rob Gronkowski has a great matchup, so I’m leaning towards using both of those guys).

Probably makes sense to consider the number of entries. If in a league with about 20 other owners, probably a good number of them will be using the strategy of trying to save the Packers for the final game. If you were to instead use them early, it might give you the advantage of having gotten to use Rodgers and (especially) Adams while most of the others were trying to save them. As the number of entries goes up, it becomes more and more important that you tap into something that others are missing.

Longtime subscriber, love your products. Definitely the best out there. My league does a redraft for the playoffs and every year there are one or two fullbacks with virtually no touches during the year that get a surprise TD. I know most teams doesn’t even use the FB in most sets, but could you compile a list of FBs please?

I don’t think this is a good year to be trying to outsmart everyone by stockpiling all of the best fullbacks. I think there are only six of them currently listed on the 53-man rosters of the 14 playoff teams. That’s including Reggie Gilliam of the Bills, who’s listed as a tight end. I’m including him among the fullbacks because I’ve seen him line up as a lead blocker in goal-line situations. I remember seeing him score a 1-yard touchdown in a preseason game and wondering if that would happen again in the regular season. Only three fullbacks from playoff teams scored in the regular season, and one of them (Alec Ingold) is on IR. Michael Burton recently scored on a goal-line run for Kansas City. Kyle Juszczyk catches some balls for the 49ers and has scored 2 TDs. None of the other fullbacks has gotten into the end zone this year.